The St. Louis Rams currently have 13 wide receivers on their roster. The Moe the merrier!

As it stands, the St. Louis Rams currently have 13 wide receivers on their roster.  My professional guess is that they trim that number down as we approach the regular season.  Just a hunch!

A noteworthy, maybe forgotten, wideout who signed with the Rams during this past May is former University of Missouri WR, T.J. Moe.

At Mizzou, Moe’s best season came during his sophomore year [2010] when he caught 92 passes in 13 games, totaling 1,045 yards and six touchdowns.  And while his receiving numbers trailed off during the final two seasons of his college career, his leadership capabilities did not.  Moe was named the team’s captain in 2012; his senior year.

Moe may lack the ideal size [he’s 5’11"] many teams look for in an "elite" receiver in today’s NFL, but what he lacks in stature, he makes up for with sheer athletic ability.  Moe is not only extremely quick, but he’s tough, and has the strength to sustain hits across the middle; which is where he’d most likely find himself, as a slot receiver.

Prior to the 2013 NFL draft, Moe received an invite to the NFL combine.  He did not disappoint.  Of the seven statistical categories tracked for WR’s on NFL.com’s draft profiles, Moe received "Top Performer" honors in four of the seven. 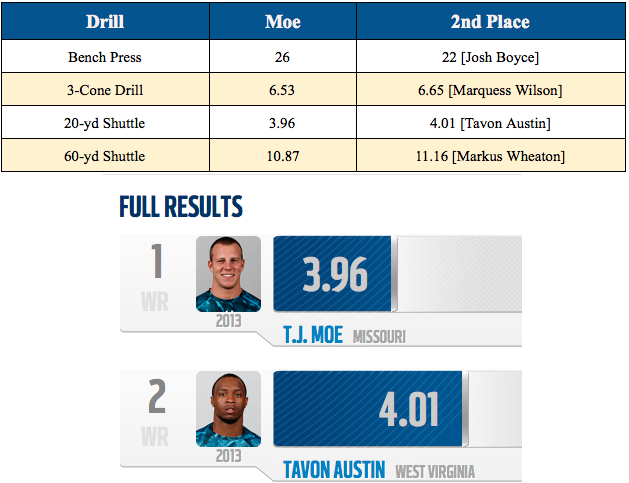 That’s right.  The Rams appear to have nabbed the quickest receiver out of the 2013 draft...and we’re not referring to the one drafted 8th overall.  As a matter of fact, we’re talking about the one who wasn’t drafted in the first seven rounds, and was then selected by the New England Patriots as an undrafted free agent.

Dreams of having perfectly thrown balls from a quarterback wearing Ugg boots were short-lived though.  During the Patriots’ organized team activities, Moe tore his achilles tendon, ending not only his 2013 season but his tenure in New England.

After working his way back to health, Moe returned to his home state in May of this year, inking a one year deal with the Rams.  But, as the graphic shows above, regardless of the five-hundreths of a second that Moe may have bested Austin in the 20-yd shuttle, it’s Tavon Austin who’s lining up in the slot when the Rams take the field in September.

That’s not to say Moe doesn’t have his place though.  Just how/where does Moe fit, and what are his expectations for 2014?

T.J. will need to prove his value as a contributor on special teams, and it’s quite possible he does.  Moe may not beat out others for a roster spot because of his pony-tailed box jumping, but he did have kick/punt return responsibilities in his junior and senior seasons at Mizzou.

Veltung, spelling Austin no doubt, returned seven punts in 2013, for a rather uneventful 61 yards.  Of course, if Moe wants to take on any of Austin’s punt return responsibilities, he’ll probably need to prevent opposing punters from...devouring his soul?

That, again, will be easier said than done.  I do like Moe’s chances of making the squad, and I think if Veltung is his real competition, we’ll be seeing a lot of Moe [on ST’s] in 2014.

Many question the durability of Tavon Austin though, due to his size, and so it’s not necessarily a bad thing to have another speedy, sure-handed slot receiver around if an unfortunate injury were to occur.

I like his chances...if he can stay healthy.  So far, so good.  Adjusting to special team’s life with the Rams may take some time, but Moe certainly has the physical attributes to get it done.  Some good coaching - which can be provided by John Fassel - may go a long way.

Moe seems content with any role he can play to help the Rams in 2014, and he also seems to be understanding that his future with the team starts with special team’s contributions.  Shortly after signing with the Rams, Moe had this to say about Fassel [via St. Louis Post Dispatch]:

I asked him [Fassel] if he'd mind if I just put a sleeping bag in his office.  I like him a lot. He's a really good guy; I think a really good coach.

Moe’s desire to earn a roster spot on a team not all that far from home will most likely be made evident over the next few months.  And while standout play on the field only heightens his chances of making the final roster, a few kind words towards a Rams’ decision-maker certainly won’t hurt matters.