Kenny Britt is one of the St. Louis Rams’ most notable 2014 free agent signings. Where does he fit on the team’s depth chart, and what are his expectations for the upcoming year?

The St. Louis Rams' acquisition of former Titans’ wideout - and Jeff Fisher draft pick - Kenny Britt didn’t necessarily satisfy the hunger pangs of many fans still yearning for a game-changing wide receiver.  That being said, Britt is the only notable WR signing - in free agency and the draft - the organization has made in 2014.

And there appears to be very little grey area as it pertains to opinions on the Rams’ newest receiver.  You either welcome the very cost-friendly signing [1 yr, $1.4mil], or have mentally prepared yourself for his unceremonious release sometime in the near future.  Regardless, this signing [as aforementioned] doesn’t appear to have satiated the desire for the long lost, "true number one," heroic-type wide receiver fans have waited for since the conclusion of the 2008 season; when Torry Holt exited stage left.

When weighing your own opinion on the matter, keep this in mind...

The Pros:  Britt is only 25 years old, and possesses the size and athletic ability to make big plays in the Rams’ passing game.  Despite being drafted in 2009 [30th overall], Britt is only about sixteen months older than Brian Quick; who was drafted in 2012.  He’s also shown the ability to eclipse the ever-elusive [yet not all that impressive] 700-yd mark in a single season...something none of the current Rams’ WR’s have done.  In Britt’s rookie year, he had 42 catches, 701 yards, and 3 TD’s.  In his sophomore season as a pro [his best statistically] he went for 42/775/9.

Also, he’s picking up quickly in camp.  Despite making a few waves in OTA’s, Britt’s doing something none of the other wideouts are...making headlines for standout performances.  You may remember, and yes it’s just practice, Britt burning the Rams’ starting cornerbacks - Janoris Jenkins and Trumaine Johnson - on the first day of organized team activities.  He let the young CB’s hear about it too.  And teammate scuffles aside, it’s refreshing to see Britt’s competitive nature, and ability to beat starting caliber corners with speed.  Somebody’s got to...

Britt has only played in one [full] sixteen game season though.  Which brings us to...

The Cons [no pun intended]:  Britt has trouble staying on the field, and in large part due to off-the-field legal matters.  In January 2010, Britt was arrested in New Jersey for three outstanding traffic warrants totaling $865.  In April 2011, Britt was arrested after being pulled over by police for doing 71 mph in a 50 mph zone [again in NJ].  He then drove off in an attempt to elude the police officer.  He was caught by that police officer shortly thereafter...walking away from the vehicle [Porsche] he’d been caught speeding in.  Two months later, in June 2011, Britt was again arrested for two counts of resisting arrest.  In January 2013, Britt dropped a close personal friend off at a New Jersey hospital shortly after being stabbed.  When police began to question Britt about the situation, he refused to cooperate.  That was just Britt’s 9th run-in with the police since being drafted, less than four years prior.

Oh, and then there was the sex tape, Britt’s first fun off-field activity as a Ram.

Aside from the anticipation of his 10th brush with the law, or dropping the sequel to his first cinematic masterpiece, what’s there to worry about?

According to Pro Football Focus, Britt ranked amongst the league’s worst in regards to holding on to "catchable balls" in 2013: 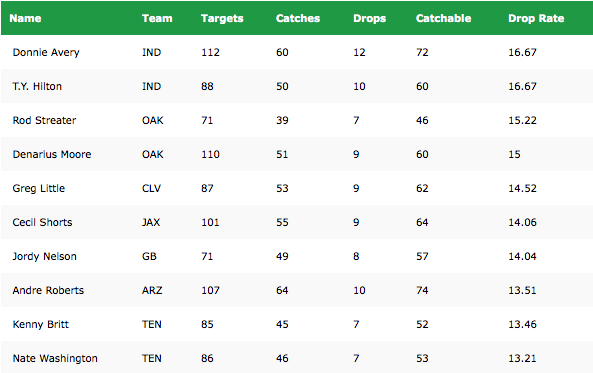 Before signing with the Rams in early April, Britt made it very clear he’s still got what it takes to be a "Number 1" wide receiver in the NFL, and that he’s got every intention of seeing that it happens.  At the conclusion of the 2013 season, Britt said in an interview with The Tennessean:

I am going to be a No. 1 receiver somewhere else if I am not here next year, and that is guaranteed.  I am definitely going to be a receiver that makes plays on Sundays and makes something happen for a team.

Britt now has a new home, and looks to be in prime position to see his plans through to fruition.  Simply put, the competition isn’t steep at the split end [x] position for the Rams.  Britt’s primary competition will be Brian Quick, who’s shown flashes but has yet to consistently put together a string of meaningful games, yet alone an entire season.

Both Britt and Quick are comparable in size/stature, but barring a breakout from Quick [which appears to be a long shot] over the next few months, it appears Britt will be well on his way to becoming the "No. 1 receiver somewhere else" he was guaranteeing several months ago.

Scenario A) Britt, who’s had three knee surgeries, stays healthy for the entirety of the 2014 season.  As does QB Sam Bradford.  The two continue to build trust/rapport throughout the offseason, carrying over into regular season play.  Britt maintains starting WR status, keeping his hands clean of off-field distractions/legal matters.

With those parameters set, I still think it’ll be difficult for Britt to eclipse the ever-elusive 700-yd mark that so many of his predecessors have sniffed in the past half decade.  Prior to his injury in Week 7, Sam Bradford and Jared Cook - the team’s leading receiver in 2013 - seemed to have a great [and strengthening] rapport.  Throw in the fact that Tavon Austin should be more heavily featured, Stedman Bailey will play in increased role after his four game suspension, Chris Givens will look to bounce back from a rather disappointing sophomore season, and looks from the Rams’ signal caller might be tough to come by.  I do, however, think he’ll be a solid, and much-needed, red zone threat.

Let’s not forget the Rams’ have made it pretty clear they intend on relying heavily on the run-game in 2014.

If I had to call it, best case scenario [and I’ll buy the "chip on the shoulder" bit], I’d say Britt catches around 60 passes, 660 yards, and five touchdowns.  Not a bad year...but St. Louis isn’t the place if he’s looking for a near triple-digit catch total.

Scenario B) More of the same from the "Cons" section above.  Britt struggles to hold onto the ball.  He struggles to stay on the field; either as a result of injury [knees go bad quickly in the Edward Jones Dome] or off-field drama.

In this scenario, he falls in line [statistically speaking] with much of the "depth" on the Rams’ roster.  He’ll be looking in the ballpark of 35 catches, 430 yards, and two scores.  Call "Scenario B" a huge disappointment.

And those are just meaningless prognostications of my own, several months before a meaningful snap is played.  Is it possible Britt approaches 1,000 yards in his first season in St. Louis?  Absolutely.  Is it also plausible to think he becomes victim of a run-heavy offense that spreads the ball around to the bevy of up-and-comers on passing downs?  That he finds himself in incarcerated on game day?  Hard to say "no" to either.

The "expectations" for Britt are high though, regardless of your take on his signing.  The Rams saw fit to pass on guys like Sammy Watkins and Mike Evans in the 2014 draft.  Britt has to be involved in this offense.  As a matter of fact, they need him to be.

C’mon now.  Britt is a low-risk [monetarily speaking], high-reward signing, and we’ll find out where his priorities lie prior to, potentially during, the regular season.  The Rams may have found themselves a steal in free agency if Britt can keep his head on straight, and play to his full potential.  The question is whether or not Jeff Fisher and Co. can keep him on the straight and narrow.  There’s obviously, based on his track record, a very good chance he hinders his own ability.  Let’s face it... the meetings with police far outweigh the number of seasons played.
Either way, he’s making the final 53.  Whether or not you’re hearing "Ay Papi" in the end zone, or on Instagram, will speak volumes about his true value to the team in 2014 though.