ESPN ranks the Rams roster.....and it's not pretty

Sam Monson, usually of PFF but recently of ESPN, destroyed the Rams' roster. You want to see how low he ranked them.

Share All sharing options for: ESPN ranks the Rams roster.....and it's not pretty

Well, this is interesting.

Sam Monson, who has largely moved from Pro Football Focus to ESPN, ranked all 32 of the NFL's rosters, looking at the starting 12 a side to account for the reality that teams use different personnel. And after grading out the Rams double dozen, where does put them? (insider subscription required...boo)

It's fair to note that Monson spoon-fed the Skip Bayless-chaired world of drive-by hot takes with a piece earlier this week that argued that Tom Brady was no longer a top 5 QB (also insider...also boo), of course using the empty "elite" modifier which led some random NFL fan in my Twitter timeline using the new version, "elite pure QB." Makes it easier to ratchet the takes up from hot to blistering.

So to that end, it's fair to at least approach Monson's rankings with a dose of skepticism as to whether this is fodder for the ESPN content ouroboros or if this was a fair attempt at personnel analysis. Perhaps I'm being naive, but I'll lean toward the latter for the sake of discussion.

That being the case, I was, unsurprisingly, surprised by how low he ranked the Rams. Take a look: 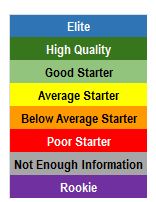 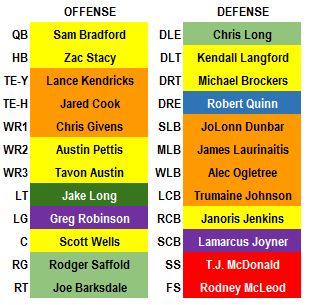 I won't copy and paste his entire write-up, but his intro on the Rams should suffice to sum up his thoughts:

If there is a team to challenge the Jaguars for the worst roster in football, it's the Rams. Robert Quinn is a blue-chip player who had 91 total sacks, hits and hurries a year ago, and the starters look capable in the trenches, but the roster is in trouble everywhere else.

- Those are some pretty brutal rankings for the TEs and WRs. While Jared Cook disappointed most in his first season with the Rams, his production certainly wasn't below average. And it's difficult to see how Austin Pettis is (a) given a higher assessment than Chris Givens and (b) equal assessment as Tavon Austin. If we're going off basic traditional statistics, sure. Pettis and Austin had similar totals...but Pettis had 170 less yards on four less receptions than Givens. Sure, PFF grades drove the majority of these, but that's just a weird outcome for that trio.

- From the minute the Rams' week 17 game ended to the moment after Jadeveon Clowney was announced as the first overall pick, hundreds of NFL pundits cited the often "Sam Bradford's on his back" and how undertalented the Rams' O-line is/was. And yet here, you've got the Rams' best unit according to these rankings: one high quality, two good starters, one average starter and a premium rookie. Looks similar to how a Rams fan would rank our O-line, no? And glad to see Joe Barksdale get some love.

- Langford and Brockers as average starters? Does that strike you as fair?

- Oof. The linebackers and secondary. Any Rams fans nodding in agreement on this?

- This does say something about the coaching though. If you're telling me the Rams have the second-worst roster, then it's a near damn miracle they've managed seven wins in consecutive seasons in the league's best division. And for a defense that only has two players above average that is supported (or more accurate is not) by such a lackluster offense to rank in the top half for points allowed and 9th in rushing yards allowed despite such poor linebackers and safeties....if the coaches were ranked too, Fisher and everyone on the defensive side would have to be considered "elite" as well...which I doubt would be a popular opinion among most NFL observers.

That all being said, it's an interesting case to be made two months out from the first preseason game. The idea of the Rams riding into the 2014 season with the league's second-worst roster with higher expectations than at any time since the Martz-Linehan bridge era...well that might be the most Rams thing possible.