Do the Rams really have one of the worst rosters in the NFL?

The Rams can't be that bad can they?

Share All sharing options for: Do the Rams really have one of the worst rosters in the NFL?

Pro Football Focus ranked the St. Louis Rams with the 2nd worst starting roster in the NFL. Personally, I enjoy PFF grading. It's nothing concrete and rating their players are subjective, but they usually do a solid job.

So now that a few weeks have passed since we learned how horrible the Rams starting 22 are, we get to see the rest of the depth chart. Can you guess how PFF rated the rest of the players on the team? Well, you don't have to because the chart is below.

So here's the chart, which includes the Rams starters and the backups. 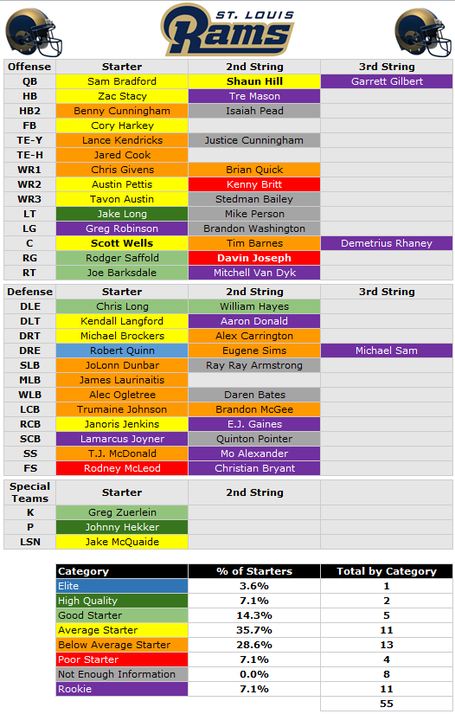 It's pretty ugly when 11 out of 55 players are ranked average starters, which make up 35.7% of the chart. Eight of the players on this chart are better than average. The Rams have 19 players who PFF didn't rank either because of being a rookie, or because they haven't played much. Then you have 17 players that make up the below average ranking...

Here's how the Rams compare with other teams.

Based on that chart, the Rams are the 3rd worst team in the NFL. The biggest reason for the Rams low ranking is the fact that they're a young team, and many of the players on the roster are unproven.  The Rams should be better than where PFF ranked them, but to prove it players will have to rise to their potential.

The Rams need players like Tavon Austin, Alec Ogletree, Greg Robinson, Janoris Jenkins - and yes even Sam Bradford - to play at a higher level than they did last season. The Rams have depth behind their starters, but it's mostly a projection based on where they will finish this season.

For those of you who want to know more about PFF rationale behind some of these selections, Gordon McGuinness talked about certain players, and let us know why some of our favorite players ranked so low, in his comment section.

How do you feel about PFF ratings of the Rams depth chart? Do you disagree with a players ranking? What about where the team is ranked?