James Laurinaitis can crush a softball and Chris Long puts lot of effort into missing one. But it's all fun, and it's all for charity.

Share All sharing options for: This is what you missed at the Coach Fisher & Friends Celebrity Softball Game

The annual Coach Fisher & Friends Celebrity Softball Game is always a good time. Fans get to meet their favorite players, receive autographs, shag home runs and enjoy what can only be described as a team of professional football players attempting to play softball. Pretty straightforward, right?

It's gets even better though: All the proceeds from the event go to charity. Proceeds from this year's softball game went to The BackStopppers, The Jack and J.T. Snow Scientific Research Foundation, Mercy Ministries, Wounded Warrior Project and Catch-A-Dream Foundation.

So, what did you miss?

Listen to the crack of that bat. Just listen to it! That's the sound of a moonshot. James Laurinaitis crushed seven home runs, two of which made it out of the park. He took on Remy of 93.7 The Bull in the home run derby finals. T.J. Moe, T.J. McDonald, Alec Ogletree and hip-hop artist Murphy Lee were the other derby participants.

YOUR CHANCE TO SHAG HOME RUNS

So, if you were a "kid," you had the chance to shag any home run ball. Every "kid," with or without a glove, ran out to the field, because what "kid" doesn't want to catch a homer?

Home run derby abut to start. "Kids, if you wanna shag some balls in the OF..." Does that include adults that look like kids? #RamsSoftball — Daniel Doelling (@Daniel_Doelling) June 8, 2014

I'm 23. I took my chance and ran with it. I beat 20 10-year olds to a home run ball that bounced off the wall. Very proud moment of mine.

THE OPPORTUNITY TO TAKE A PICTURE WITH THE BEST

Greg Robinson, Jo-Lonn Dunbar, Greg Zuerlein, Sam Bradford and Johnny Hekker (yes, THE Johnny Hekker, among many others, signed autographs and took pictures with fans (who had nothing for them to sign).

Two of the more popular players were Greg the Leg and Sam Bradford. They signed everything, from helmets, to footballs and guitars. No pregnant bellies this time. Very unfortunate. 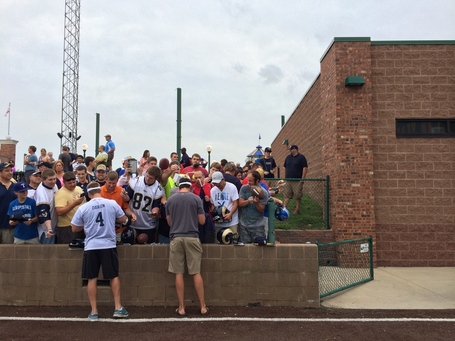 And players signed autographs late into the night, too, well after the fireworks concluded.

@STLouisRams @JOEL9ONE @RQuinn94 thanks for great night of softball and fun. And 2 the best 2 d-ends sticking around for the fans afterwards

Teams were Blue and White, Fisher and Schottenheimer. The rosters, below, show a heavily stacked Blue Team. Austin Pettis, who drew praise from Ozzie Smith for his play at SS, hit three home runs, drove in seven RBIs and was honored with the MVP award last year, was teamed with Austin Davis, who had a short career on the Southern Miss baseball team. 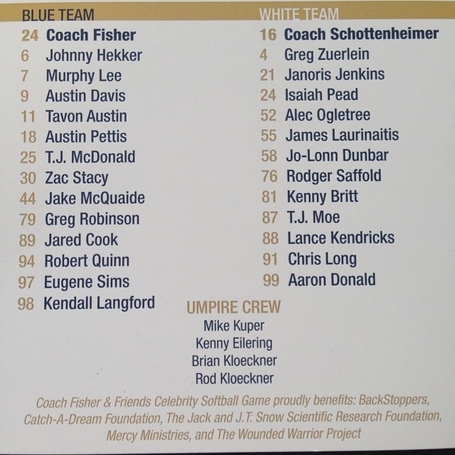 There was really was too much going on at once to give a full (and accurate) log of the game. There were plenty of shenanigans, like several attempts of the hidden ball trick, added runs, and kids and cheerleaders pinch running. But it was a lot of fun:

THERE WAS SOME SWEET BONDING TIME, 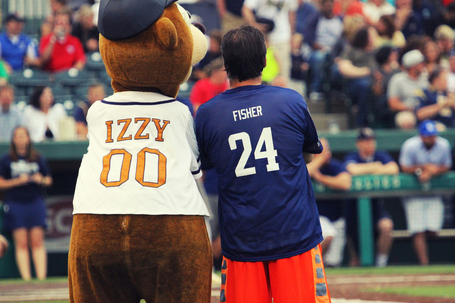 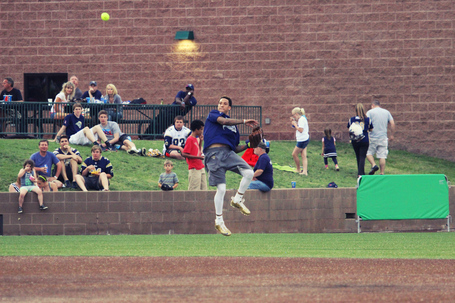 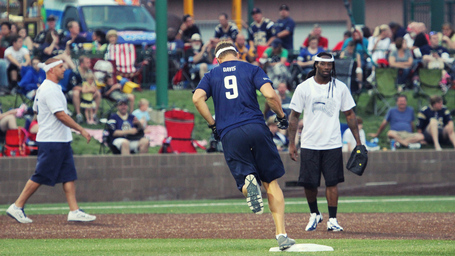 AND GRACE AND SWIFT FEET (AARON DONALD) IN RIGHT-CENTER FIELD. 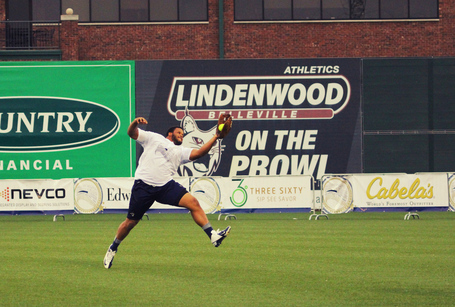 THERE WERE BIG SWINGS, 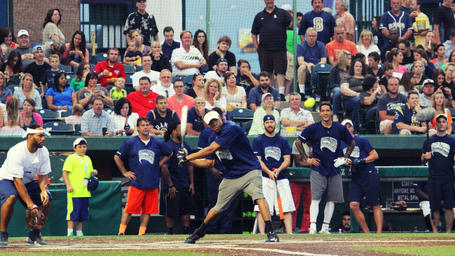 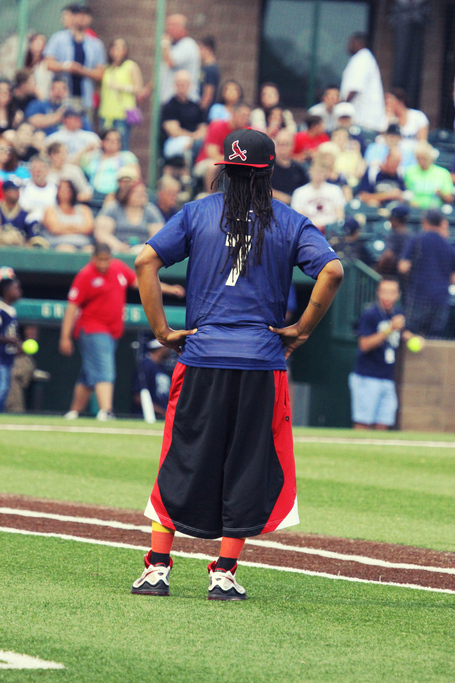 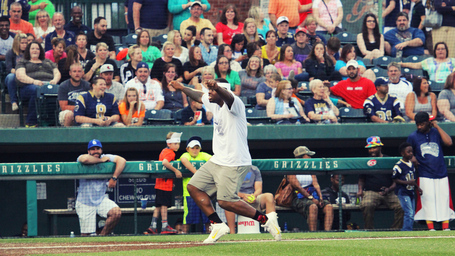 AND A LOT OF SHENANIGANS. 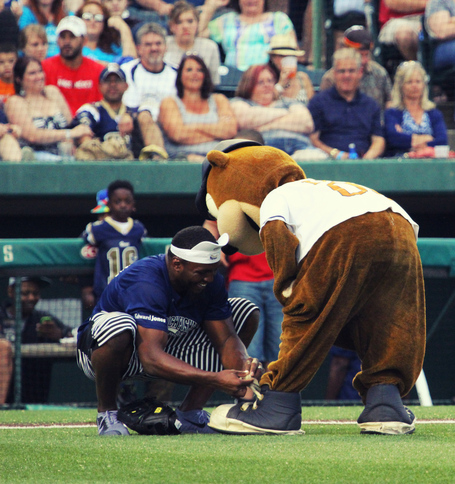 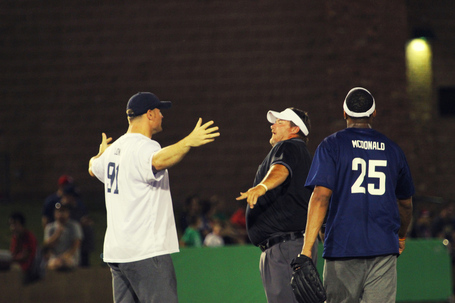 AND PSYCHED PETTIS ON A CONGRATULATORY HOME RUN HIGH-FIVE. 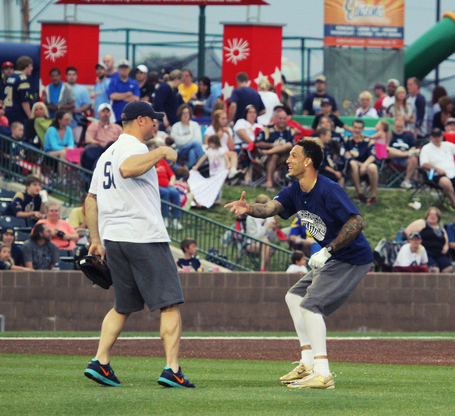 HE ENDED UP WINNING... THE LVP. 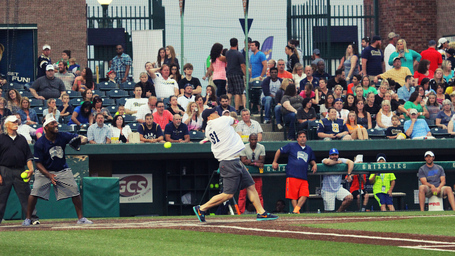 Lastly, if you didn't make it out to the event, you probably missed the sunset. It was decent. 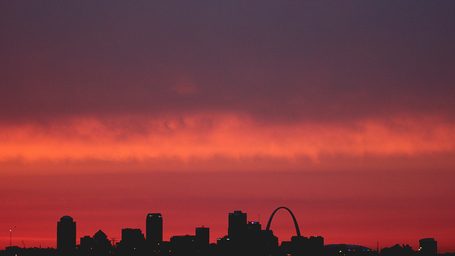