The Rams have used three of their last four, and four of their last seven, first round picks on defensive lineman -- which is why they will be atop of the sack charts next season... again.

Share All sharing options for: 2014 NFL Draft: The Defensive Line from Hell

The Rams are not shy about taking a defensive lineman in the first round. This draft caps 3 of the last 4 years in which the Rams have taken a DT or DE, and dating back to 2008, 4 of the last 7. Here's a look at the production of those players thus far and what the Rams might expect from them in the coming season.

Despite the fact that Long has never made a Pro-Bowl, he has become a staple on the Rams D-line. He was very highly touted coming out of college (obviously, he was selected number 2 overall) and remains the heart of this dominant Rams line. In his 6 year career, Long has recorded: 222 combined tackles, 50.5 sacks, 7 forced fumbles, and is consistently at the top of the team for QB hurries. It's hard to imagine a Rams defense without him. Long is the cornerstone of the young and stellar Rams defensive line. Big things can and should be expected from him in the 2014 season. Robert Quinn will see a lot of doubles -- which will ultimately fail because he eats quarterbacks for Sunday brunch -- meaning Long will record his first 15+ sack season, earn his first Pro-Bowl honors, and captain this young team to its first playoff appearance in over a decade. The image of him carrying Robert Quinn off of the field after Quinn broke the Rams single season sack record will be forever indelible in my mind. Long is a guy you want in your locker room. There's not much else to say, Chris is the ultimate teammate.

Not much needs to be said about Robert Quinn. The guy is a beast and an absolute pleasure to watch. He had his breakout year in 2013 and put up some ridiculous stats. In his 3 year career, Quinn has: 109 combined tackles, 37.5 sacks (19 from 2013), 8 forced fumbles (7 from 2013), and 15 stuffs (12 from 2013). I was a little surprised and disappointed that he did not win AP Defensive Player of the Year, but Luke Kuechly definitely had a deserving season, as well. I don't see Quinn's numbers dipping in 2014, especially with the addition of a top prospect defensive tackle in Aaron Donald and the consistency of Chris Long. He will face a lot of doubles, just like last year, but he will manage to rip his way to the gunslinger over and over again. There were numerous occasions last season where he was knocked to the ground -- presumably out of the play -- but still clawed his was through and either plowed the quarterback down or rushed him into an early throw. I see Quinn breaching the 20 sack mark in 2014 with the help of CL91. Quinn and Long might be the most dynamic defensive end duo in the NFL. I hope to see them lined up opposite each other for many years to come.

We have not yet seen the best of Michael Brockers. He has two solid seasons under his belt, but he has the potential to be an All-Pro defensive tackle. At 6'5, 330, Brockers should be mauling interior lineman, running backs, and quarterbacks. In his 2 year career, Brockers has put up: 77 combined tackles, 9.5 sacks, 2 forced fumbles, and 8 stuffs. By the numbers, good... but not great. There will be a lot of competition at the DT this year. Brockers is a sure starter week 1 but he can't afford to slow down, there is too much talent and too much depth at that position. When he is on, there are not many people that can stop him. I just hope he doesn't have too many spurious penalties called against him after he lays a monstrous -- yet clean -- hit. We all remember the play, for some reason I can't find a video of it anywhere, but here is Fisher's response. The best is yet to come for Michael Brockers, and 2014 might be his breakout season.

I'm not sure about you, but I went through five stages of emotional states when big AD was drafted. It started with shock, then proceeded to frustration, then confusion, followed by acceptance, and lastly obsession. The first four states came and went pretty quickly, but now I cannot stop thinking about how dominant the Rams defensive line will be next season. Donald is 2 inches of height away from being a top 10 -- maybe top 5 -- pick. As a Chicago resident, I had 8 texts from friends bantering me for the Rams decision to take Donald... because they were furious the Bears couldn't take him at 14. He will have a tough time beating out Kendall Langford for the starting job week 1, but it makes for a helluva battle. Competition drives innovation, and this defensive line is stacked the max. He had an amazing senior season and a great 4 year career with Pitt, racking up: 181 combined tackles, 29.5 sacks, and 6 forced fumbles. I am excited to get this Mack truck in blue and gold. 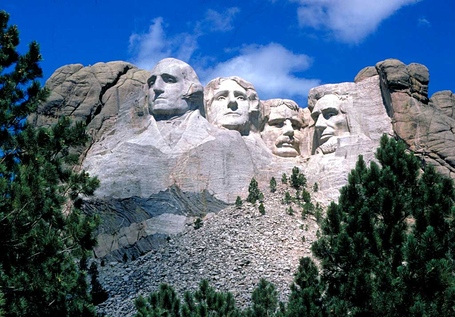 The Rams are in a spot to make some noise early in the season and gain some momentum heading into the Deathly Hallows that awaits them week 6 through 11. I cannot wait for this defensive line to make grown men look like boys. Is anyone crafty enough to turn that Mount Rushmore photo into Mount Crushmore featuring Quinn, Brockers, Donald, and Long (in that order)?

2014 NFL Draft results: Rams loaded up for a third day