The Manziel talk was a smokescreen, and the Rams just made a big bet on their future.

There isn't much certainty this time of year. But the St. Louis Rams made it quite clear who their quarterback will be in 2014 when they paraded Sam Bradford onto the stage in front of a small gathering of die-hard season ticket holders on Wednesday night. This after a good two weeks of lighting off smoke bombs that spelled out Johnny Manziel's name.

Looking back, we probably should have known. Not because of their public pronouncements of support earlier in the spring, but it was just too hard to wiggle out from under the weight of his contract.

Bernie Miklasz hit the nail on the head in his column this morning.

That's the fascinating thing to me: If the Rams take a pass on Manziel, they're actually taking a bigger gamble ... on Bradford.

The most risk-averse franchise in the NFL is choosing to stay the course, a route that's led to exactly seven wins in each of the last two seasons. It doesn't look like that's going to change in 2014. But that's really not about Bradford vs. Manziel. Set aside the quarterback issue all together. The real news here is that Jeff Fisher believes what the Rams are doing on offense is working.

Even Bradford fans found common ground with their opposing fans on the other side of the isle in Mike Tanier's piece from last week, deconstructing a confused offensive game plan. It explains the scoring struggles. It explains stunted development from players. And it goes a long way toward explaining why the Rams are better but still aren't good enough to contend.

And in case you were holding out hope for the run-first game plan centered on Zac Stacy, take a look at these numbers: 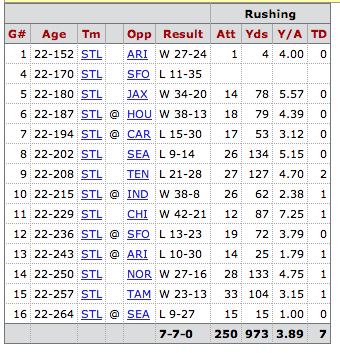 Not many games as the season went on where he averaged more than four yards a carry. A pretty good clue that opposing defenses keyed in on a one-dimensional offense. Remember when all the teams in the league did that to Steven Jackson? The more things change, huh?

Steve McNair, who the Oilers drafted in 1995. That's it. And that's when Fisher had Mike Heimerdinger working for him years after drafting McNair.

It could still work. The defense should be better. The offense just doesn't have to screw it up, a la Schottey's time with Mark Sanchez and the Jets. That plan works fine in the AFC these days, where a series of 17-14 wins can turn into an 8-8 record can and a de facto ticket to the playoffs,

But this is the NFC. 10-win teams don't make it to the playoffs.

This is year three for Fisher and Snead in St. Louis. Expectations are certainly higher they were in 2012. A city's interest in pro football is waning. In less than a year, the Rams will be free agent tenants desperately seeking stadium certainty.