No selection in the NFL Draft is a sure thing, and pick 13 is no different.

Share All sharing options for: 2014 NFL Draft: History of Pick 13

The Rams second selection in the 2014 NFL Draft is pick 13. While pick 13 doesn't carry the pressure that the second overall pick in the draft does, it is still high enough that if you miss, it could set your franchise back significantly. The last three selections at 13 resulted in a defensive rookie of the year, a 1,000-yard receiver, and a defensive tackle who has 12.5 sacks in 38 games played; Sheldon Richardson, Michael Floyd, and Nick Fairley.

Here are some quick facts about pick 13: 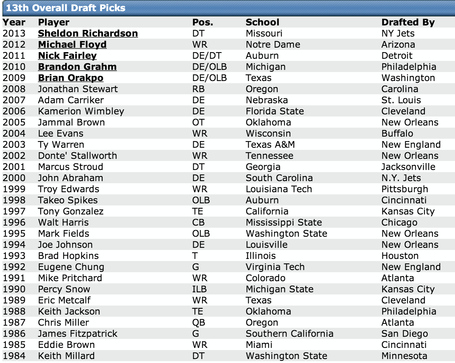 Who do you think the Rams take at 13?

A group of Rams fans will be videotaping their reactions to the Rams selections on draft day and sending them in. You can submit using Vine, Instagram, emailing a video in or linking me to a youtube. A video montage will be created to show just how polarizing this draft is. If you are interested in joining in, please contact me on twitter Follow @HawkWayOfLife or email me at HawkWayOfLife@gmail.com.