Fantasy Football Talk: Which Rams should you have on your roster

The Rams are not known for offering productive fantasy football players, but here's a look at some guys worth having on your roster. *Info based on 12 man league*

Share All sharing options for: Fantasy Football Talk: Which Rams should you have on your roster

The St. Louis Rams are not known for offering productive fantasy football players. Steven Jackson had his time a few years ago, but he always seemed to under perform (from a fantasy perspective). Don't get me wrong, I had him every year he was on the Rams -- which was easy being the only St. Louis fan in my league. I draft with my heart -always have, and always will. I'm just waiting for the day that it pays off. Regardless, there are still a few Rams worth having on your roster.

Stacy is the highest rated Ram coming into 2014, and for good reason. He ran like a beast last season and the addition of Greg Robinson will only bolster his stock. Pretty much everything I have seen so far has him ranked between 10 and 14. There is some question as to whether he can last an entire season with the way he runs, and the beating that he takes. That being said, Tre Mason is a must-have handcuff, so don't wait around until the 11th or 12th expecting him to be there. His stock is on the rise, and the loss of Richardson will only make him more appealing. A late first round pick in a snake style draft could work perfectly for this combo: snag Stacy in the early 2nd round, and take Mason in the early 8th. If you manage to have an early 1st round selection, Stacy might be a reach with a top pick and you could be "S.O.L" in the late second. 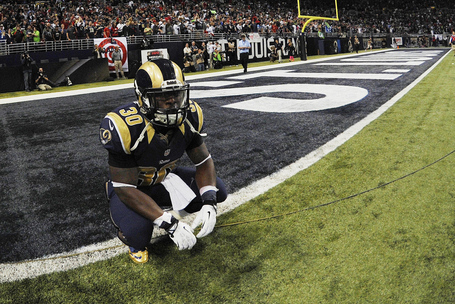 The only negative thing this Rams D has going against them is the strength of schedule. As good as the D can be, there are some games where the odds are stacked against them. The NFC West games will most likely be defensive bloodbaths, but starting the Rams D at Seahawks***, at 49ers, at Eagles, and vs the Broncos could be dangerous. That's why I'm a big proponent on having two solid defensive options. Picking up a team with an easy schedule -- especially during weeks 5, 9, and 11 -- is a smart choice. The Cleveland Browns are a team on my radar to fill such role. During those 3 weeks, the Browns play Tennessee, Tampa, and Houston. Cleveland has invested a lot into their defense by using the 8th overall pick on a CB, as well as signing LB Karlos Dansby and S Donte Whitner. With that said, I'd be happy with the Rams defense in the 10th and Cleveland in the 14th or 15th.

*** The Rams don't play at Seattle until week 17, so unless your league plays through the end of the season you're in the clear for this game. If your league DOES play through week 17 AND you make it to the finals, starting a defense AT Seattle could be costly.

I'm sure many of you were victims of drafting Tavon too early last season. This year, his stock is much lower. Drafting him in the 11th round is much less risk than the 6th or 7th in 2013. Austin is worth having on your team for his natural ability to make plays. If the Rams can figure out how to get the ball in his hands consistently, he will be a solid flex option. The rest of the Rams receiving core is a mess. We won't know much until later in the off season and closer to the regular season***. Do I think that there will be another viable Rams receiver? Yes, but there is no way to tell who that will be. Givens could bounce back and have a strong year, while Brian Quick could finally have his breakout season, Kenny Britt could end up playing well under Fisher again, and Stedman will most likely be an early season pickup once he serves out his 4 game suspension.

***Check back closer to the season with an updated prediction of the Rams fantasy stock, WRs in particular. It's too early to tell where the other wide outs will fall because it is still uncertain who will be starting.

Bradford will definitely be my backup QB. He has been since he was drafted in 2010. He was a legitimate starting QB option at the beginning of 2013. With an improved defense -- to provide good field position -- offensive line, and a balanced attack, there's still hope he can contribute to your fantasy teams success.

Cook is one of the most infuriating players in the NFL. So much talent, he just can't seem to consistently figure it out. But if/ when he does... could be a solid option, especially if you can get him in a late round.

The St. Louis Rams make their bones in the late rounds of fantasy drafts. Last year, I picked up Stacy with my 15th overall pick (I also picked up Richardson with my 7th....woof). The 8th round might be a bit of a stretch for Mason, but if you invest a 1st or 2nd on Stacy, it will be worthwhile to have the security blanket. With a late first round pick, here's how I'd like to see the Rams selections shape up (based on 12 man league):

In all likelihood, things will look quite a bit different as fantasy draft season approaches. There will probably be another Rams receiver in the mix and Tavon's stock will go up once he breaks out a few off season runs.