Your favorite Rams players ... as minifigures

Now you can see some of your favorite St. Louis Rams players in Lego form.

Share All sharing options for: Your favorite Rams players ... as minifigures

Legos are the most popular toy in the world. The NFL is the most popular sport in America. Naturally, the two things intersect because a multibillion entertainment business isn't going to lose out on another licensing opportunity. That means you can get some of your favorite players from the St. Louis Rams in minifigure form.

There's Sam Bradford, Tavon Austin and Greg Zuerlein for the offensive minded among you. Clearly, the makers of these toys don't have a great handle on the Rams' run-first offense. You'll just have to paint Zac Stacy's number on an extra. 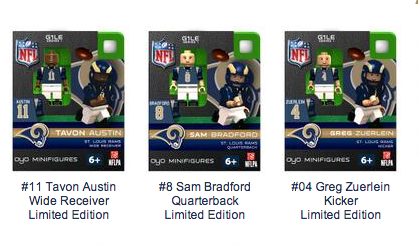 You can get both first-round picks in Lego form too. 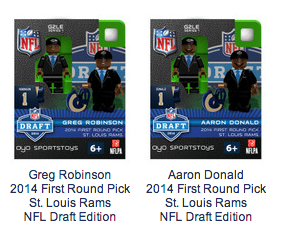 What about defensive players? Good news, Jake Long has been reassigned by the toy company.

Hmm, Long doesn't look like the prototypical cornerback, but given the state of cornerback play last year, he couldn't have been that bad.

There you go, collect them all. You'll have to build your own Edward Jones Dome with blocks, maybe you can seek public money for it.