Even with a pair of first rounders in the mix, the Rams won't have to lay out a ton of cash to sign their new players.

The St. Louis Rams will need approximately $5.7 million in cap space to sign all 11 of their draft picks this year. That includes first rounders Aaron Donald and Greg Robinson. Not a bad deal since rookies kind of got thrown under the bus in the 2011 CBA. But it does make a trade the one the Rams pulled off in 2012 that much more valuable because they were able to bring in addition talent without stressing the cap, freeing up money for extensions (or hanging onto bad deals like the one ... well, you know which one).

Since the new CBA went into place, teams have been getting deals done with their draft picks almost immediately. Salaries are based on a slotting system with certain rules about the length of a contract, bonuses, etc. It takes most of the negotiation out of the process.

For the Rams, that's also a means to not hurry things. Teams don't have to worry about players holding out, so there's no rush to get a deal done either. Last year the Rams announced all of their draft class had signed contracts on June 13. The year before, most of the players didn't sign until July.

How much money do the Rams have allocated for rookies?

Over the Cap estimates the Rams' rookie pool allocation for this year to be approximately $10.359 million, the second most of any team in the NFL thanks to a pair of first-round picks that include the second overall spot. That's an estimate, remember.

A few more numbers to know:

How many years are players signed for?

Aaron Donald and Greg Robinson will get four-year deals with a fifth year option. The fifth-year option is exclusive to players picked in the first round. A team has to decide after the player's third season whether or not to pick up the option, which is based on a formula for average salaries at that position. (Remember, the Rams just picked up Robert Quinn's fifth-year option prior to the draft).

Players taken after the first round all get four-year contracts.

How much will the rookies get paid?

Obviously that depends on where they were drafted. Greg Robinson, the second pick, will get the biggest contract, with an estimated total value of $22.2 million, including a signing bonus of $13.799 million.

Now look how much the contract numbers fall off as you go through the first round. Aaron Donald's deal, for the 13th pick in the draft, will have an estimated value of $10.1 million with a signing bonus of $5.692 million.

Second-round pick Lamarcus Joyner will have a deal worth approximately $5 million with a $1.978 million bonus. That's the last of the seven-figure bonuses.

Here's the estimated totals for all 11 picks from Over the Cap: 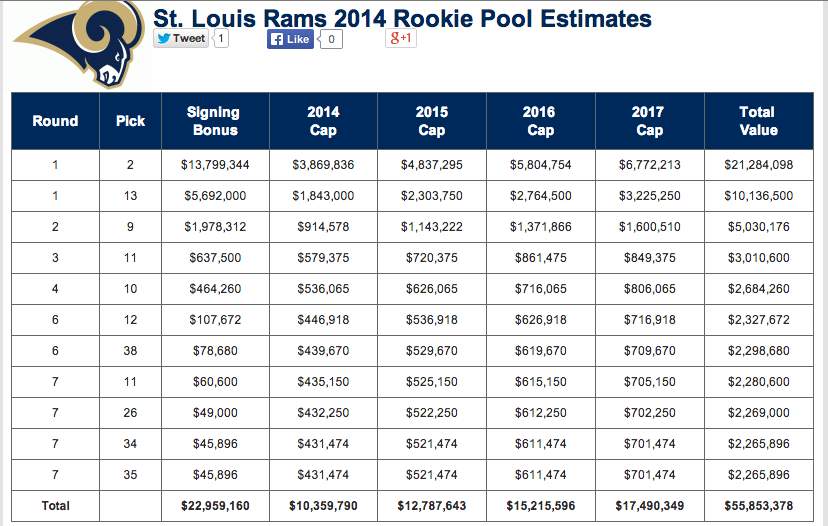 Obviously, there are a few nuances to those deals, but I'll refer you to the fine folks at Over the Cap for a more thorough explainer than I could provide.