With the 2014 NFL draft behind us, we can now focus on more important things...like Fantasy Football. ESPN’s Matthew Berry released his Top 200 on Tuesday, and he’s showing the St. Louis Rams’ players a little less love than last year.

On Tuesday, ESPN’s Fantasy expert, Matthew Berry, released his Top 200 player rankings for 2014.  He has good reason to be cautious about placing Rams' players on the list.  Last year, the Talented Mr. Roto seemed very optimistic about the play - fantasy or otherwise - for some of the Rams’ up-and-comers.  The results, however, didn’t match his June 2013 rankings, and it’s had an impact on this year's [very early] list.

To save you the exhausting clicking and scrolling, I’ll just place them below in handy chart form: 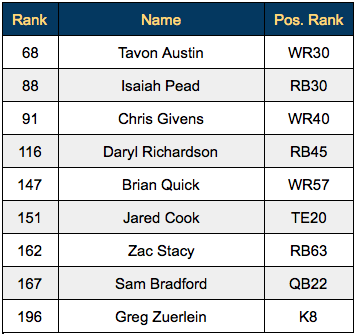 I suppose it’s no surprise that Tavon Austin is the first player listed for the Rams.  You don’t trade up to draft the most electric player in college football, only to have him outperformed by a 5th round running back...err...

The surprise, to me, though was the amount of players Berry had given Top 200 worthiness.  You’ve got 200 spots, 32 NFL teams, and the nine players listed above give the Rams well above what a team would/could average [6.25].  Not too shabby for a team whose offense isn’t necessarily known for it’s firepower.

But you don’t have to be a fantasy football expert [heck, you don’t have to even play] to know that several of these players underperformed in 2013 and therefore Berry’s list - approximately eleven months later - is far more sparse on optimism, and Rams’ players...

It’s nice to see Zac Stacy get the recognition he deserves.  It also would’ve been nice to have had him playing in the first four weeks of the 2013 season.  He would’ve rushed for well over 1,000 yards and could’ve been a serious candidate for ROTY.  I digress.  Either way, Stacy performed well, and Berry’s giving him RB10 status for now.  As an aside, RB9 is Doug Martin; RB11 is Le’Veon Bell.  Not bad company.

It’s no shocker he’s got the Rams’ defense ranked this year.  The INT’s and Def. TD’s weren’t quite as bountiful in 2014, but the sack attack the Rams brought [and will bring] surely makes them worth draft consideration.  Also, Tavon Austin may not have lived up to Berry’s expectations at WR, but he’s a threat to take punt returns to the house on a second’s notice, making the "/ST’s" part far more valuable.

Berry also shows some love for Rams’ rookie RB, Tre Mason.  He’s got Mason ranked higher this year - both in total rank and position rank - than he did for Stacy in his rookie campaign.  With Daryl Richardson gone, and Isaiah Pead...well, doing whatever Isaiah Pead does...Mason will certainly get his fair share of touches in the Rams’ offense.  Can the Rams expect the rookie to step up and provide the team with Stacy-esque production?

Fantasy Football rankings mean little [-to-nothing, if you don’t actually play], but they highlight Berry’s expectations for these players, nonetheless.  Also, it has nothing to do with potential reality TV shows, which makes it all the more welcomed to me.

For those interested, thoughts on Berry’s Top 200, Rams or otherwise?  Is he under/over-valuing any particular player[s] on his most recent list?

*****
For more on the St. Louis Rams, Fantasy Football, or anything non-reality-TV related, feel free to follow Brandon Bate on Twitter at