There are only 16 more Thursdays until the 2014 NFL season officially kicks off. Until then, we prognosticate...we pontificate...we mastur...try to keep up with "the haps" of the St. Louis Rams... 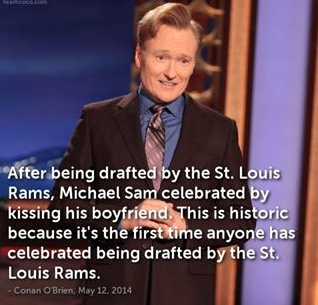 The 2014 NFL draft went down in unpredictable fashion. Now it’s time to look at what each team’s haul means going forward...

After a quiet free agency, the Rams added a load of players via the seven-round NFL draft, and undrafted free agent signings.  That being said, now’s probably as good a time as any to make predictions on how the final depth chart rounds out.  Here’s [more] from Nick Wagoner...

The Michael Sam story is bigger than football. That might be the single-biggest challenge Sam faces as he attempts to make the St. Louis Rams.  Sam, the first openly gay player in NFL history, started the business of life after the draft Tuesday, sitting on a platform with other Rams rookies during an introductory news conference at team headquarters.

As with almost everything else in the NFL world, the media has quickly moved on from their most recent mass event and shifted their focus down the road to the next; in this case, the regular season. With free agency and the NFL Draft in the rear-view mirror, it is now "safe" to start making predictions about how teams with stack up in September; or, at least, that is how the media views it.

Which Rookie RB’s Will Get the Ball the Most?:  NFL.com

Let’s face the facts.  Making the team as a 7th round selection is not easy...and it doesn’t matter who you are, what state you’re from, or how popular you may be in the state you played college ball in.  But, Bernie Miklasz thinks he makes the final 53.  And here’s why...

When Greg Robinson and Tre Mason arrived in St. Louis for their introduction to the Rams Tuesday, the pair of Auburn standouts joined an organization that has deep ties to the Tigers

Sam, and the Rams, Prepare to Make History:  USA Today

Michael Sam is resigned to the fact that it's simply not possible for any conversation about him to be strictly football-related. At least not yet.

Upon his arrival Monday evening in St. Louis, Robinson wasted no time taking in his new surroundings. Although he'd been to St. Louis on a pre-draft visit, Robinson was now arriving at his new home rather than just the next stop on a nation-wide tour of various team facilities.

I’m just going to leave this here for the fans who may have wanted a top WR in the most recent draft.  Or maybe for those who expected Stedman Bailey to step up with brevity.  Or maybe...just maybe...for those who have little-to-no faith that Brian Quick turns out to be a third year stud.

You want some Andre Johnson?

"Nobody's been here as long as I have," Johnson said, via the Houston Chronicle. "You just kind of look at things. I've been thinking about things this offseason. And I just kind of wonder sometimes, 'Is this still the place for me?’"

...Nathan Kearns, of Ramblin’ Fan, wonders if Johnson is the missing piece to the Rams’ offense.

The Oprah Winfrey Network announced Wednesday that it is working with Sam on a reality TV project that will show his life as the first openly gay player in the NFL.
Why the Rams Need Quick More Than Ever:  Ramblin’ Fan
In the wake of not only passing on a wide receiver in the 2014 NFL Draft, but also the recent suspension of the up and coming wideout Stedman Bailey, the Rams are now forced to sit back and look at their receiving core. Young, raw talent is the first thing that pops into one’s head when reviewing the Rams overall depth chart, but that is the most evident when you get to the Rams receivers. One of those raw receivers is third-year man, Brian Quick.