The Rams broke a barrier on Saturday, and a nation cheered.

I wasn't near Tweetdeck when the Rams drafted Michael Sam. I was out of the house, prepping and taking pictures of my brother and his class for high school prom.

There were ten of us at a home where we were all scheduled to gather and then leave for the high school for group photos. We waited a his girlfriend's house, taking photos here and there of the corsages and the dresses. Phones were making calls to friends and general chitchat of the neighbors and the dog filled the room. On the TV -- which had my attention -- was Trey Wingo. It was about 4:30 p.m. and an undrafted Michael was the topic. Accompanying Wingo on the screen was a poll; it read something along the lines of "Will Michael Sam be drafted?"

It was at that point my brother I made eye contact and siloed into our own discussion of Michael Sam. It was brief.

"Do you think Michael Sam will be drafted?" he asked. I responded with a "yeah," and litte more fodder. It wasn't really the time to talk draft.

He had been thinking of how cool it would be the Rams drafted Sam, as had I. We were both hopeful.

We arrived to the high school around 5:00 p.m. The parking lot and the front of the high school was as you'd expect on a night for high school seniors. Questionable dresses and the occasion white suite dotted the landscape of black suites and dresses. Parents and relatives, many with smartphones to capture the most memorable night of their sons and daughters, were taking the best portrait-oriented photos they could. I had my smartphone out, too, but I was reading the SMS updates from Rotoworld_FB and Jim Thomas. Scanning through the texts, I noticed that, finally, the Rams had drafted a quarterback, Garrett Gilberts. Mitchell Van Dyke and Christian Bryant went to the Rams, too.

"Sam still hasn't been drafted," I told my brother. Again, it still wasn't the time to talk about the draft.

It was nearly 30 minutes of standing around and maybe 5 minutes of organized group photos before we finally left for Tower Grove Park.

We were anxious to get to Tower Grove. The day was fading quickly and, quite frankly, were all drained by hunger. We darted out of the car when we arrived to find the other parties.

I became a little sidetracked. If you've ever been to Tower Grove Park you'd understand why -- It's beautiful. Tall, aged trees grace the park, and, where we were, the fountains and stone structures steal the show. Several minutes passed by before I realized where I should be: with my brother and his classmates.

We met up. I  directed where Jared and Taylor should stand and face for the most optimal composition. Again, it was probably 5 minutes of organized group photos before they went about their own business.

Perhaps three minutes went by after that shoot before I looked at my phone and saw the Twitter SMS update from Jim Thomas: "It's Michael Sam to Rams!" 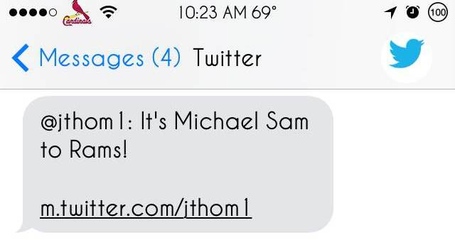 I immediately exclaimed to the my brother "the Rams drafted Sam!"

Throughtout the rest of the evening, I encountered similar reactions to the Rams/Michael Sam news from friends, family and strangers alike.

As we downed our hunger with tacos and fajitas at Diablitos Cantinia, I overheard the conversation at the table to right of me. It included local weatherman Glenn Zimmerman and perhaps other Fox 2 staff members. One many flipped out his phone and read an update to the table about Michael Sam and the Rams. But the table, at least those apart of the conversation, were ecstatic.

My mom, who isn't much of a football fan and knows little else about Michael Sam, was happy about what she read (presumably via Twitter).

My boss, who is the least knowledgable football 'fan' I know -- and this one struck me -- is now a converted Rams fan.

I was out during the draft announcement. When I flipped on Tweetdeck to tweet the "skinny on UDFAs," as Wyndee put it, my real-time columns filled with news of Michael Sam, much to the liking of my boss' reaction.

I'm not going to deny the jokes and negative sentiments. But, honestly, they were muted by the support, congratulations, joy and praise for the Rams and Michael Sam.

So proud of the @STLouisRams for showing there's nothing to be afraid of. Congratulations, @MikeSamFootball

Congratulations to Michael Sam. It's a victory for LOVE.

I just got goosebumps and a little teary. #GoRams

Good for the Rams.

Rams are a cool team.

Proud to be a #rams fan

Congrats to @MikeSamFootball on becoming a @STLouisRams Welcome to the #Rams family.

I started @TurfShowTimes in 2006. This is the happiest moment I've felt since then. I'm so happy for the Rams and Michael Sam.

Seriously, this feels better than when the Rams won the Super Bowl. Now, go win a damn Super Bowl.

Laurinaitis on Sam in Feb: "if he’s a ... Ram and he comes to work and proves himself through camp and OTAs ... then I’ll have his back."

Laurinaitis: "I think you have an understanding of the #Rams identity after this weekend." #RamsDraft

Proud to welcome @MikeSamFootball to the Rams. Glad we could add a great football player that knows how to put it all on the line. #GoRams

Fisher:"We live in an age of diversity." Spoke to Stan Kroenke two picks before the Rams made the choice. Unanimous support from entire org.

Staring a several real-time twitter columns and I’m seeing way more "I might need to start rooting for the Rams now" than not. Re: Sam.

Michael Sam is pissed off for greatness!!!

2014 NFL Draft results: Rams loaded up for a third day