Nearing the back of the first round, we clean up another five spots on the TST board.

Share All sharing options for: The TST Big Board, 25-30 (The Deafening)

The last round was the closest yet. 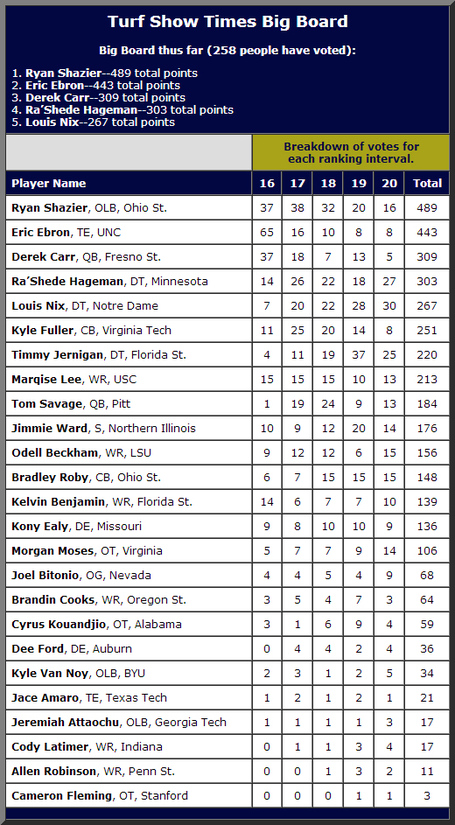 Ebron was today's top of the board specialist topping more boards than anyone but not picking up those back end points. Look at the board selections for Shazier and Carr; they had equal votes at 21 but Shazier was incredibly popular throughout. The Carr/Hageman battle was close throughout voting. And Nix made the board over Fuller only because of the votes he picked up for the 25th spot. Sometimes being in last isn't the worst.

Among the excluded, shouts out to TIMMY JERNIGAN STAND UP. And I didn't properly assess the Tom Savage love. One vote at the top? Wasn't surprised. All the votes thereafter? I honestly didn't expect that level of popularity. And I think it's relatively obvious the wide receivers are cannibalizing each other.

Today's board definitely made me take note of how hard/subjective it is to pick the next five to add. If yall want a name thrown in the mix, let me know. Not promising, but definitely want to keep it reflective of who yall would want to vote for.