The pain is but temporary. Into the playoff spots we go...

Share All sharing options for: The TST Big Board, 21-25 (The Bludgeoning)

We've finished the top 20. Here's how last round went: 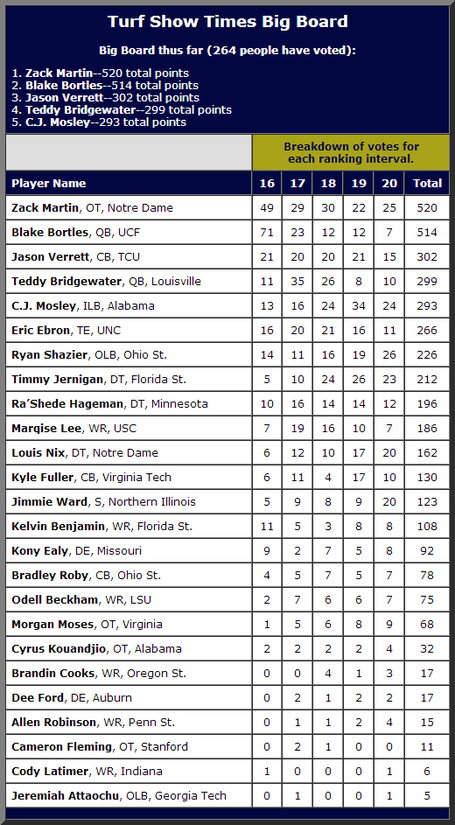 Now that was close. Bortles dominated the 16 slot votes, but Martin picked up so many totals he was able to edge out Bortbot. Meanwhile, the Verrett-Bridgewater-Mosley sandwich was separated by all of 9 points. That's two boards that could have swung that trio in a completely different direction. These are starting to be some very tight battles.

Notice the DTs getting some love. Timmy Jernigan (TIMMY JERNIGAN!) made a huge jump, but Hageman nearly cracked the top 5 despite this being the first opportunity he could be voted on. Louis Nix isn't far behind either. Meanwhile, the WRs aren't getting much consideration among the other options.

Big board recap (adjusted the slot entrants to be restricted to the top five by score; Bortles and Martin made it in by slot last time and that would've have made a mess of things...which is sure to happen again):

Well, the two new QBs definitely skewed things a bit. Let's see as we close out the first round what positions separate.

Here's the board for the day: