And now, the war begins.

Share All sharing options for: The TST Big Board, 11-15 (The Awakening)

Started from the bottom now we here. Ladies and gents, here's the tally for the sixth through tenth spots on our board now in lovely jpeg format: 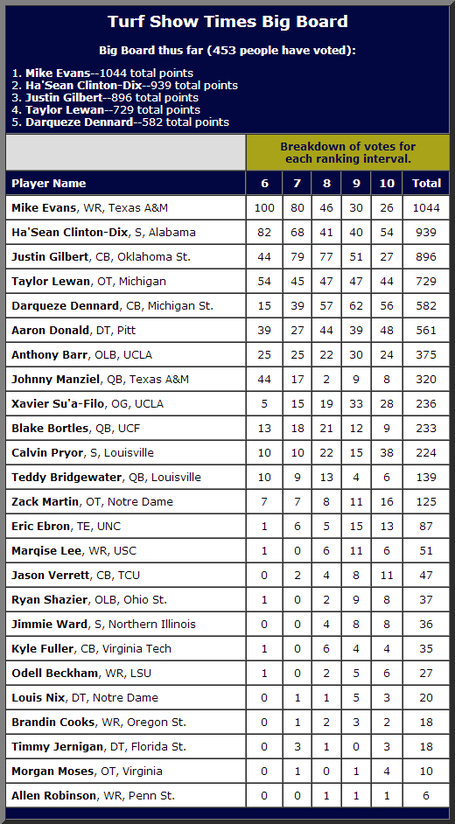 Pretty clear top four with some separation between each, but man the Dennard v. Donald battle was close! Take a look at the sixth slot votes. Evans and HaHa are in line, but Justin Gilbert got the 8th spot by cleaning up in the middle of most people's boards here. Same thing happened for Dennard sticking in the back end of most people's boards without featuring often at the front (same thing coming for Xavier Su'a-Filo?). And I'm loving the love/hate Johnny Football effect.

So through two quintuplets, here's our top 10:

Those two are about to get split up big time. So far the two groups of five have matched names, though in different orders. I'd be shocked if the top five from this part of the board by score matches the top five by slot votes, but we'll see.

Also of note is the position totals. Out of ten players, that's three offensive tackles, two wideouts and two corners. Interested to see how the prospects who people see as fitting the Rams needs stack up against those who don't.

Weekend big boarding is a goooooooooooo.