The St. Louis Rams sometimes struggled to prevent big passing plays in 2013. Have a look at the big gains [25+ yards] the defense allowed in Weeks 1-8...

Share All sharing options for: The St. Louis Rams’ Defense Gave Up Some Big Pass Plays in 2013 [Weeks 1-8]

The 2014 NFL offseason has provided fans with plenty of time to speculate on just how the St. Louis Rams intend on addressing the team’s needs.  Free agency signings have fizzled, leaving pundits with just over three weeks of mock drafting to sort out the depth chart.

A lot of that speculation swirls around the amount of big passing plays the defense allowed in 2013.  There’s plenty of room for debate whether the team is in more dire need for a starting cornerback [to replace Cortland Finnegan], or a free safety [as an upgrade to Rodney McLeod].  No matter your stance on the matter, you’re right.  The Rams need help at both positions, and only time will tell how [more so when] the organization intends on addressing them.

It’s widely known that Finnegan was a huge disappointment in 2013.  He proved ineffective in coverage, and was allowing opposing QB’s to complete 76% of their passes, and a 136 QB rating to match.  For a player averaging $10mil per year, that’s far from the desired result.

McLeod is a bit of a different story.  He doesn’t have a Pro Bowl on his resume, and the third year pro will make just over $570,000 in 2014.  He’s not a world-beater, but no one really expects him to be.  The undrafted free agent has played well at times, but has also been culprit on many of the Rams’ big pass plays allowed.

In both cases, fans look to May 8th - Day 1 of the NFL Draft - for answers [potential upgrades].  And with two picks in the first round, it’s possible the Rams have new [rookie] starters at both positions at the onset of the regular season.

Regardless of the draft-day signings, the Rams still need to improve collectively, as it wasn’t McLeod’s or Finnegan’s sole responsibility to thwart opposing defenses.  Several big plays were allowed through the air in 2013, and oftentimes inadequate/failed coverage on the front side of the play put one or the other in a  precarious position.  That being said, there were many times where they [along with others] were simply scorched...

Let’s have a look at the seven plays over 25 yards the Rams allowed throughout the first half of the 2013 NFL season.  Who’s to blame, and does it alter your thoughts on the Rams’ needs heading into 2014?

This play isn’t about McLeod [who isn’t even on the field]...and it’s not necessarily about the coverage by Cortland Finnegan.  This was a simply a spectacular catch by Cardinals’ WR Michael Floyd.

That is Cortland Finnegan he’s stepping in front of to make the play.  He appeared to be stride-for-stride with Floyd as they sprinted inside the 20-yard line, but Floyd utilized his size cutting towards the hash marks, blocking Finnegan’s vision, and ultimately coming down with the ball.  Again, this catch wasn’t routine...

Result of the Play:  44-yard completion to Michael Floyd. First and Goal, Cardinals.

It may be difficult to see in the graphic below, but there’s a few things wrong with this play...and none of them include Cortland Finnegan.  McLeod is on the field, roughly 20 yards off the line of scrimmage.  He’s in prime position to make a play, but he’s locked in on Harry Douglas, who’s beat Trumaine Johnson on the inside route.  Unfortunately, McLeod doesn’t recognize that Julio Jones has beat Janoris Jenkins with relative ease.  This pic was snapped with the ball being released from Matt Ryan’s hand.  Jenkins didn't receive the help he needed in order to keep this play from going the distance...

Result of the Play:  81-yard Touchdown to Julio Jones

This play involves both Finnegan and McLeod.  Finnegan you’ll notice earlier in the play...he’s the one giving the play about 50% effort.  Luckily McLeod recognizes Cortland’s lackadaisical approach to this play, and steps up and makes the tackle.  The veteran’s ups just aren’t what they used to be... 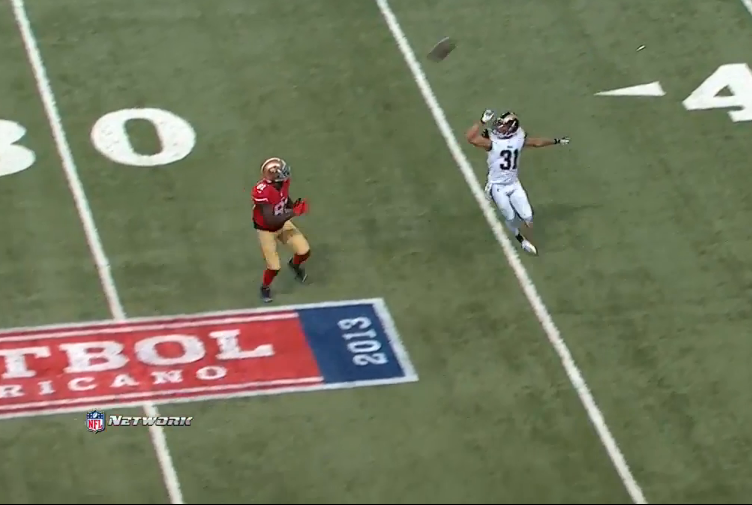 Result of the Play:  42-yard completion to Anquan Boldin. 1st down at the Rams’ 11-yard line.

Complete breakdown.  As you can see, Blackmon immediately breaks free into the secondary uncovered, with only Matt Giordano standing between him and the end zone.  I doubt this is how Tim Walton drew it up, as far-fetched as that may sound.  You’ll notice the Rams fielded three safeties on this play...and one of them is primarily to blame.

It’s a 1st and 10 on the play, and Gabbert notices the opportunity for a solid gain as the Rams line up in their infamous "soft coverage."  Trumaine Johnson is already giving WR Ace Sanders a 7-yard cushion.

The breakdown occurs when Gabbert sells the pump fake to Sanders, and Stewart bites thinking he’s got an easy pick six.  Instead, Gabbert recognizes his over-pursuit, and hits Blackmon hits Blackmon at midfield ; already behind both Johnson and Stewart.  Giordano didn’t lay a finger on Blackmon, and it was a foot race to the end zone.

Result of the Play: 67-yard touchdown to Justin Blackmon

A great throw-and-catch from Gabbert to Cecil Shorts III.  The Rams have the Jaguars pinned in their own end zone.  The Jags’ offensive line provides Gabbert with solid protection, but Trumaine Johnson allows Shorts to get outside along the sideline.  McLeod was on the field for the play, but the quickness with which Gabbert gets rid of the ball rendered him a non-factor.  Again, just a well executed play by the Jaguars, where Shorts won the battle against Johnson.

Result of the Play:  28-yard completion to Cecil Shorts.  1st down at the Jaguars 30.

Count the missed opportunities with me, if you will.  Arian Foster receives the dump off, and:

1.  Texans’ center Chris Myers cuts across the line of scrimmage after snapping the ball, providing the first block - on Alec Ogletree - that gets Foster into space.

2.  Janoris Jenkins essentially punts on make a tackle attempt.  Most likely because Texans’ guard Wade Smith is barreling all 300 lbs. of himself downfield, directly at the Rams’ CB.  Jenkins goes to his knees to avoid the devastation.  Reaching out with one arm to tackle Arian Foster won’t work 99% of the time.  This was no exception.

3.  Kendall Langford and James Laurinaitis are slow.  While Langford really had no chance to catch up, Laurinaitis hesitated at the Rams’ 42-yard line as he momentarily glances upfield.  Had he maintained his speed and angle, he pushes Foster out of bounds around the Rams’ 35.  Instead, he tries to make a reaching grab on Foster from behind.

4.  Giordano gets blocked by Andre Johnson.  Foster cuts back inside gaining a few more yards.  Trumaine Johnson finally pushes Foster out of bounds at the Rams’ 19-yard line.

Pretty much anyone who was involved with covering/tackling Greg Olsen on this play failed.  Olsen cuts inside on a post route, catching the ball at midfield.  You can see in the graphic below that he’s already beat his man, Trumaine Johnson.  I’m not certain what Darian Stewart’s responsibilities on this play were, and it’s apparent he didn’t either.  Cam Newton eyed Olsen from the moment he took the snap, so how Olsen is already behind the safety 15 yards downfield makes little sense.  That leaves Rodney McLeod [at own 40] to make the tackle.  In the Gif above, you’ll notice him laying on the ground at midfield after a missed tackle.  Johnson, Stewart, and Jenkins would ultimately at the Rams’ 36-yard line. 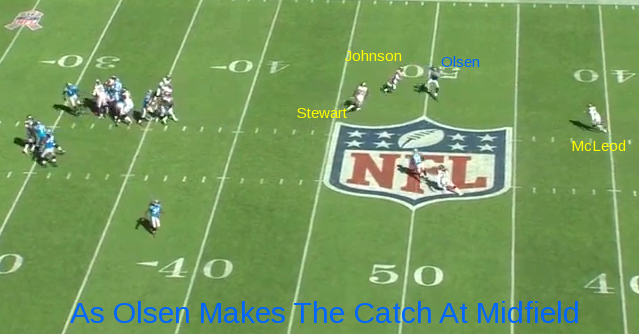 Russell Wilson takes the snap.  He recognizes that Golden Tate has gotten outside of Janoris Jenkins, and rifles it downfield.  Golden Tate does what you want top-tier wideouts to do; he makes the decision to slow, cut inside, and wins the battle in the air.  Wave bye bye... 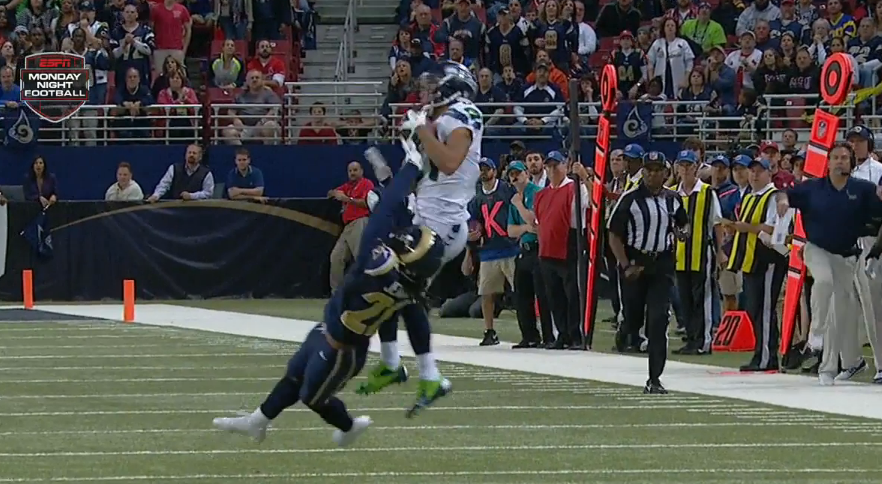 Jenkins was clearly off balance when Tate cuts inside.  His only hope at this point is that Tate comes down off balance himself, and goes to the ground. 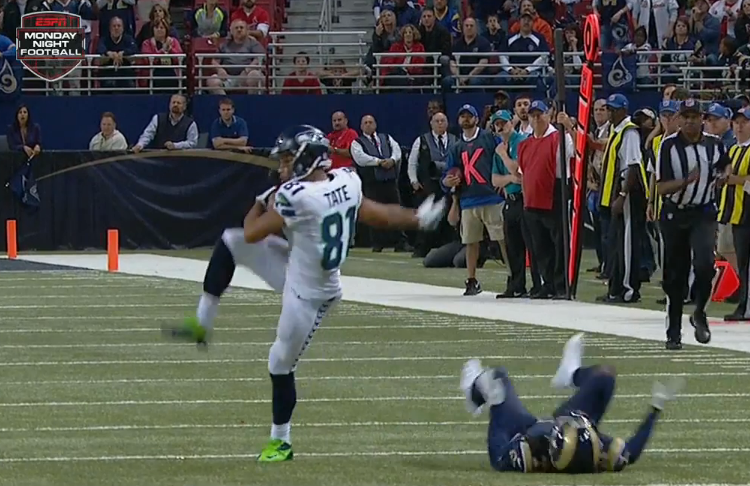 Result of the Play:  80-yard touchdown to Golden Tate

*****
Thanks for stopping by to review some of the big plays allowed by the Rams’ defense in Weeks 1-8.  Stay tuned for the second half of the season.  Does what you’ve seen above alter your perception of the Rams’ secondary, or it’s needs in the upcoming draft?
For discussion, hit the comments section below or follow Brandon Bate on Twitter at