Looking at The Top of the Rams' Draft: Greg Robinson

Share All sharing options for: Looking at The Top of the Rams' Draft: Greg Robinson

Auburn's Greg Robinson began to gain national notice midway through the 2013 college football season. The massive, road-grader of an offensive tackle was a major force in the Tiger's running attack. NFL scouts began moving Robinson up their teams' draft boards. He shot by Texas A&M's Jake Matthews, who started the year out as the consensus top tackle.

With the St.Louis Rams sitting at the #2 overall draft pick - and their offensive line woes being well documented over the past few years - could Robinson be the perfect pick if they don't trade down from the #2 slot? Let's take a look at some of Robinson's measure-ables: 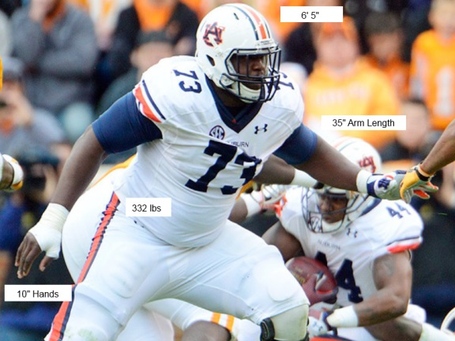 OK, so he has the size to be an NFL offensive tackle... Let's face it, he has the size to be a small city. When I first looked at the picture above, I thought Robinson had a butt as big as a Buick.Then I realized there's a player behind him in white pants too. Anyway, he's big even without a Jennifer Lopez-esk sized backside.

He's fast, running a 4.92 40-yard dash. Along with his 28.5 vertical jump, he ran a very fast 4.86 second shuttle. The NFL Combine was a showcase for Robinson's base skill set. NFL.com's Mike Mayock and Bucky Brooks couldn't say enough about the Auburn star lineman, but each had a caveat about Robinson: his pass protection skills. Auburn was a "run heavy" team, and it fit Robinson's style. Yet, to be a lock as a top two or three overall pick, you kind of want a left tackle to be sound in pass blocking since he protects a quarterback's blind side, am I right? So while Jake Matthews sinks down NFL teams'draft boards, few deny he's the more polished between he and Robinson. Where the Auburn tackle steps away from Matthews is his near dominate play in the run game. Robinson is a Peterbilt to Matthews' pick up truck. Auburn ran his way almost half the time, which is actually kind of rare to see. The right side of the offensive line is typically the "run side", since a tight end is more often than not set on this side. Instead, Robinson used his extraordinary physical prowess to bulldoze anyone who was unlucky enough to be in his path. He showed the ability to get to the "second level", hitting mobile linebackers and defensive backs.

Greg Robinson sounds awesome, right? I have to agree, but only to a point. The modern NFL is a passing league, and anyone denying this is a bit off to say the least. While it's true the run game sets up a passing attack, the ability to block in BOTH situations is critical at the NFL level. I'm not sure Greg Robinson is a "Day 1" starter for any team who lives and dies by the pass. That said, for a team yearning to improve their run game, Robinson would be a godsend.

For the Rams, it gets trickier though, since they have Jake Long - a four time Pro Bowl offensive left tackle - hopefully recovering from his late in the 2013 season knee injury. Right tackle? Well, the 25 year old Joe Barksdale did a very good job on the right side when Rodger Saffold was moved to guard. So do you spend high draft currency on a player who could need a while to nail down his pass blocking, and wind up being a "position depth" addition for a year or two? Say what you want about how fantastic Robinson looks right now, but the NFL world presents an entirely different set of learning curve standards. But with the possibility of Rodger Saffold likely to leave via free agency, the Robinson card may have a better chance at being played by the Rams' Jeff Fisher. Saffold's late season move to guard from right - and before that LEFT - tackle, showed a glaring quality depth weakness along the Rams' offensive line.

Personally, I would be hard pressed to use a top 10 overall draft pick on an offensive lineman for the Rams. But at pick 11 and beyond, I start to view "best player available" as a viable paradigm. To me, top 10 picks are for grabbing the game changing players who can score, or change the game some way by their very presence by preventing the other team from scoring. While I'm a stanch advocate of drafting top linemen, the top 10 rarefied air should be used to draft players who actually score points. Yes, I know blocking is just as important, but historically offensive linemen can be found below the top 10 pick line. Here I may sound a bit hypocritical too. It wasn't all that long ago I "helped" some good friends of mine in a "live" Mock Draft by encouraging them to draft a young guard named Chance Warmack with a Rams' top pick. The year before, I wanted them to take Daivid DeCastro - another guard - in the first round. I guess the question here is: Why?

We as fans see our team in a variety of ways. Some scream for wide receivers, quarterbacks, and even long-snappers (see: Rampage28). I try to see the most glaring flaw and over-analyse it to a degree. This being the case, I should be fully on the side of those who want the Rams to draft Greg Robinson with the #2 pick overall if Les Snead can't work his miracles and trade down. But I'm not, and it's all Brandon Bate's fault. I mean, isn't it always?

If I compare Robinson to a former first round left tackle the Rams took long ago, I don't think he can hold a candle for Orlando Pace. When all is said and done, football fans lean heavily on what they've seen to be great, and compare all who come afterward to that ideal. If there were a "Pace Caliber" left tackle in this coming NFL draft, I'd be the first one to say take him. But there isn't. Robinson, as great as many of his talents and game films are, neither he or Jake Matthews pass the "Pace-Slater-Harrah-Mack- et al" test. Matthews would be closer than Robinson for me, but I think his ceiling has been found, and what we've seen of him at Texas A&M is what we'll get at the NFL level: A good, but not great, tackle. Robinson does have the ceiling to grow into a special player at the next level, but should the Rams use a key first round draft pick on him? My answer is: no...