The St. Louis Rams have finally signed their first free agent of 2014…at least one who wasn’t already on the team in 2013. Meet Florida St. CB Greg Reid…

Before the free agency period even began, the Rams stated they’d lay low, biding their time in search of role players.  Having limited cap space certainly didn’t help matters, but the Rams stayed true to their plan, and aside from re-signing Rodger Saffold, the Rams have yet to actually sign a new player at any position.  That is, until Sunday…

On Sunday, Greg Reid, the former Florida St. standout [at CB and PR] announced on his FaceBook account that he’d be entering the NFL, and is proud to join the Rams.  Haven’t heard of him?  That’s most likely because he hasn’t played a meaningful game since December of 2011.

The Noles’ cornerback tallied 97 tackles and 7 INT’s between 2009-2011.  Reid does not shy away from tackling and - as you’ll see below - can punish his opponents.  Hard hits aside, check out what he can do with the ball in his hands…

Reid, a three year starter in Florida St., was dismissed from the team prior to the onset of the 2012 season due to team violations.  He’d go on to play in Division II at Valdosta St.  An ACL injury quickly ended his senior campaign.  Despite his electric play at Florida St., Reid went undrafted in last year’s NFL draft, and was not acquired by any team as an UDFA.

He’s been working to get back on the field though, and - despite the off-field "red flags" and injury concerns -  sounds hungry to prove his doubters wrong.  Reid attended Florida States’ Pro Day last week, where he said:

"I believe I’m a better man than I was two or three years ago.  I’m blessed to be here and blessed to feel the way I feel. … Eight months ago, I was laying up in a hospital bed. All I need is one shot."

That’s some 8 Mile stuff right there.  Reid didn’t fail to impress at the Seminoles Pro Day, either.  According to ESPN’s ACC blog, he was not only one of the biggest surprises amongst CB’s, but the entirety of the Pro Day.  A few scouts buzzed that Reid was "the best defensive back participating."

Reid’s performance at last Tuesday’s Pro Day obviously caught the eye of someone in the Rams’ organization - and being able to sign with any team at any time - was promptly nabbed by the team.  The Rams, if willing to stick to their projected duo at CB, are in need of an effective nickel corner.  They may have found their man on Sunday… [NFL.com’s Scouting Profile] 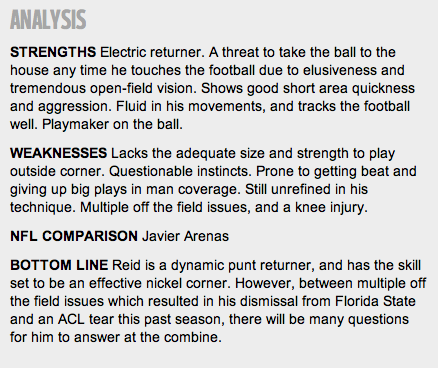