A scientific law is a statement based on repeated experimental observations that describes some aspect of the world, without trying to explain the "why". One common example is gravity. Another example?

Don’t worry about why, history tells us that Jeff Fisher doesn’t draft lineman in the first round. An easy enough pattern to accept since lineman can be drafted late and developed. But what happens if the offensive line is an area of need, an area that is crucial to your team’s potential break out year? Enter Greg Robinson. 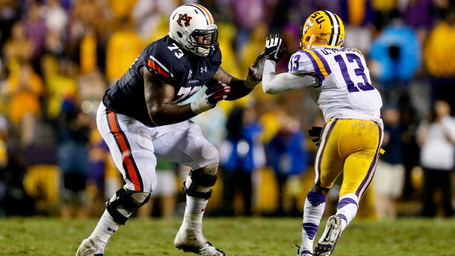 Quick Profile: Robinson, a redshirt sophomore, was recruited as a guard out of high school. Over the past two years he has held down the left tackle spot at Auburn. His unique combination of size (6’5 320lbs), athleticism and nastiness has given way to his meteoric rise up draft boards.

Strengths: Two words. RUN BLOCKING. Robinson uses power and body control to absolutely maul opponents in the running game. He doesn’t just manipulate holes, he drives guys yards off the line of scrimmage. As an added bonus, he has the foot quickness and length to hold down the left tackle spot at the pro level. I have two favorite aspects of his game: 1.) Nastiness – Robinson’s edge just exudes brute strength and aggression. Get’s the blood pumping just watching him. 2.) Athleticism – His athleticism is something I have trouble putting into words…. he’s long, powerful, and nimble.

Weaknesses: Robinson is relatively inexperienced at the position. He has only been an offensive lineman since 2009, and a tackle for the last two seasons. His pass protection isn’t bad, but it isn’t as awe-inspiring as his road grading. Mostly it’s an issue of technique, something that Paul Boudreau can fix.

Why would he be the guy to break the streak?

Each day it looks less and less likely that Rodger Saffold will be a Ram in 2014. His play was invaluable this year, especially to Zac Stacy. If he departs, we would have two guard spots to fill and one tackle spot to upgrade. On another note, Fisher and Snead have strong ties with Auburn. Fisher’s son Trent is a defensive back there and Les Snead played college ball for the Tigers. It’s safe to assume that they know much more than we do at this point.

In Jeff Fisher’s system, a lineman’s versatility is paramount. Having several guys that can play tackle as well as guard gives you a lot of flexibility when injuries arise. Robinson has that sort of versatility. I’d go as far to say that he’s both the #1 tackle in the class AND the #1 guard. If Jake Long isn’t ready to go by Week 1, Robinson could hold down the fort and then kick inside when Long gets back. Personally I like the idea of letting a relatively-green lineman like Robinson get his nose wet at both guard and tackle instead of throwing him right into the pits of hell, excuse me, into left tackle in the NFC West.

A trade down scenario? I think that he could be an option at #4 (Cleveland trade down) or #6 (Atlanta trade down). The only top 5 team we risk losing him to is Oakland, but they will likely fill QB or WR first.

Will Greg Robinson break the streak?