Welcome to "The Stable", my new series where I plan to take a look at the 2014 Running Back Class. As happy with I am with the emergence of Zac Stacy and the potential of Benny Cunningham, I believe the Ram’s could use some influx of talent. Darryl Richardson and Isaiah Pead are looking like dead weight, so why not nab a back in May? I planned to start off the series with Bishop Sankey, a personal favorite of mine, but a "Dark Horse" caught my eye. 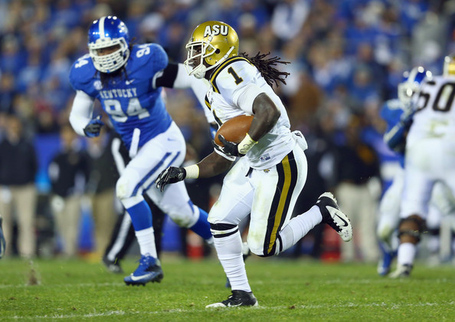 This name might ring a bell. Crowell was a 5-Star prospect coming out of Carver High School (Columbus, GA) who signed with the Georgia Bulldogs. Crowell didn’t waste any time, as he became the starter as a true freshman. The stat line for his freshman year? 185 carries for 856 yards, 4.6 YPC, and 5 TD’s. Not too shabby for a 19 year-old in the SEC. So impressive in fact, that he was the AP SEC Freshman of the Year (Keep in mind that it’s not the same as SEC Freshman of the Year – That was won by good ol’ Jadeveon). So what happened? Why haven’t we heard much from him since? Well on June 29, 2012, Crowell was arrested on three weapons charges – two of them felonies – leading to him being dismissed form the Bulldogs. Crowell transferred to Alabama State and hasn’t had any problems since. Some stats:

Strengths: Crowell runs with a full head of steam. He is very much a north-south runner who uses a great burst to hit holes with conviction. He doesn’t dance behind the line, he makes his cut and commits. His speed is above average even though he isn’t a blazer. He shows flashes of elusiveness; whether it’s making a linebacker miss or making something happen in the open field. Has the power to pick up yards after contact. Vision and decision-making skills (on the field at least) appear above average. Ball security has never been a concern.

Weaknesses: Let’s start with the elephant in the room. I’ve always maintained that some level of criminal record is acceptable, but two felony charges? That troubles me. On the field, Crowell isn’t the kind of back who will reverse the field or turn the corner for a huge gain. As a receiver, his hands appear reliable but he has never been used much in that role. His pass blocking leaves a bit to be desired. Crowell hasn’t proven himself a workhorse back, as he hasn’t ever gone above 200 carries in a season. Ideally he can add bulk without sacrificing speed.

I’m going to start you guys off with one of his Bulldog starts, excuse me, HIS COLLEGE DEBUT. The body of work he put forward in his freshman year stands as proof that his Alabama State numbers aren’t just a product of sub-par competition. Also notice a lanky defensive end for the Gamecocks; it’s a young Jadeveon Clowney. My how time flies. Crowell finishes the game with 16 carries for 118 yards and 2 catches for 40 yards.

Here’s a sample of his work this year. He finishes the game with 18 carries, 179 yards and a TD.

Conclusion: Crowell is a perfect case of a great talent with a lot of red flags. Since Fisher has shown he can keep troubled guys in line, Crowell would make a great back to add to the stable. Ideally we could get him on Day 3, but his stock may rise as teams remember how good he was, and is.

Do we need a late round back to add to "The Stable"?