Cornerback may not be the most pressing need for the St. Louis Rams in the 2014 offseason, but depth is a concern. What does Brandon McGee bring to the defense? It’s hard to judge at this point…

Share All sharing options for: St. Louis Rams: Depth At Cornerback Looms Large In The 2014 Offseason

Still less than one week removed from the conclusion of the 2013/2014 NFL season, the St. Louis Rams have been planning for their upcoming year since late December. The team has several positions on both sides of the ball that need fortifying in the upcoming months. Cornerback, while not the most pressing, should certainly be a focus.

To say that Cortland Finnegan’s 2013 season was anything shy of a disappointment would be dishonest. He would agree. The drastic drop-off in productivity from a solid first year in St. Louis has most fans confident he’ll become a cap casualty. Prior to his season-ending injury [fractured orbital bone], which was announced prior to the Week 12 matchup against the Bears, Finnegan was allowing opposing QB’s to complete 76% of passes [and a 136 QB rating] when targeting him.


To put it into a bit of perspective, it’s not uncommon for the Rams starting CB’s - like Janoris Jenkins - to play between 60-70 defensive snaps per game. To no fault of McGee’s, though. He wasn’t drafted in the 5th round of the 2013 draft with the expectation that he’d surpass Finnegan on the depth chart, and immediately contribute as a starter.
The 56 defensive snaps for McGee in Week 12 [vs. Bears] were relatively uneventful…at least at first. He tallied five tackles on the day. Interestingly, all of his tackles brought down Bears’ RB Matt Forte. McGee did show alertness at the line of scrimmage, speed in pursuit, and good open-field tackling. On a few downs, even when he didn’t make the tackle, McGee hadn’t given up on the play and - putting his speed on display - traveled sideline-to-sideline with the intention of bringing down the ball-carrier.
In the passing game, the day was quiet. Well almost. When Brandon Marshall and Alshon Jeffery are on the field, a quiet day is a good thing for any cornerback. McGee showed no evidence of getting scorched by two of the league’s Top 11 [yardage] wideouts. He did, however, make a few critical errors on the day, and it wasn’t necessarily Marshall or Jeffery causing him trouble.
With just under nine minutes remaining before the half, with the Rams up 21-7, Janoris Jenkins intercepted a pass deep down field intended for Brandon Marshall. That call was nullified due to a penalty on McGee. McGee, covering Earl Bennett on the play, gets flagged for an illegal contact penalty [beyond 5 yards] on the play. The Bears would go on to score a TD on that drive.

Fast-foward to the 4th quarter [10:18 remaining]. It’s 3rd and 6, with the Bears at the Rams’ 20-yard line. Rams up 27-14. McGee lines up tight on Bennett at the line of scrimmage. Bennett quickly runs past McGee nearest the sideline, and McGee - who never gets his head turned - sees only one way to prevent an imminent score…grab that white jersey. 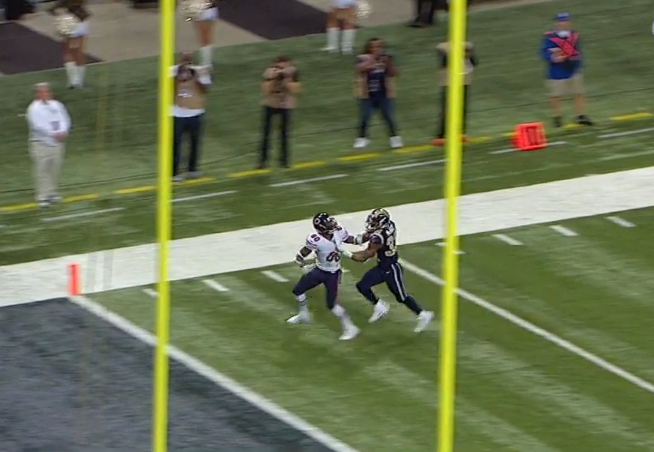 First and goal on the one, Bears. The Rams defensive front earns a bit of crowd noise back, as they thwarted the Bears attempt to punch it in from the goal line on first down. On 2nd and goal, Robert Quinn enters the backfield in milliseconds, as the left tackle pushes inside on the fake handoff leaving him completely unguarded. McCown - now running for his life - is forced to throw it into the back of the end zone in the direction of Alshon Jeffery. McGee was a little overzealous on the coverage. The result of the play…another penalty, another first and goal: 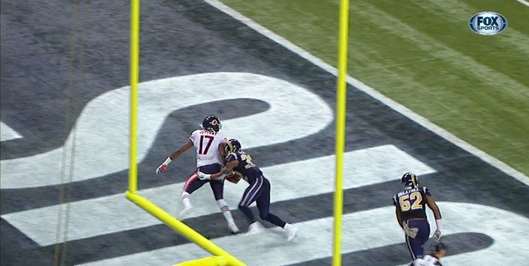 Rookie mistakes. They’re bound to happen. McGee’s didn’t cost his team the game…but they could’ve. But for a rookie CB, who’d played five defensive downs in his first ten weeks as a pro, mistakes proved costly in his first real shot provided starting CB snaps. Mental lapses lead to an interception reversal, which lead to six points for the opposition, and another Bears touchdown which probably would’ve resulted in only three points with 10+ minutes remaining. More importantly, they cost him the opportunity for more playing time. McGee would only see 16 more defensive snaps the remainder of the year; 14 of which came in the team’s final game in Seattle…which was never within reach.
But for many, namely those who expect Finnegan to shopped on the free agent market [which begins March 11th], what else do the Rams have in terms of depth at the position if the $50-million man is gone? Trumaine Johnson is [and was] immediately the starter if Finnegan is released. Then what?
Despite the way the majority of this post reads, I think Brandon McGee brings a lot to the table for the Rams. His speed and tackling ability proved very valuable to the Rams’ special teams units this season. And though it was a small sample size of plays [yet 73% of overall snaps], the Bears game provided us with a hint of what he can do as a starting corner, albeit against some excellent competition. There’s certainly room for improvement. Parting ways with former Def. Coordinator Tim Walton was probably a good starting point. A solid offseason is another step in the right direction.
We’ll all soon know what the intentions are for the Rams’ secondary. If they choose to retain Finnegan, depth - albeit questionable - may not be so dire. If not, Brandon McGee then ranks third on the depth chart. Cutting Finnegan for a bad year with the mindset of replacing him with a player who’s had approximately one game’s worth of defensive reps is probably not the most practical of decisions.
For all the armchair GM’s out there, how would you address the CB position in free agency or the draft, and where would it place Brandon McGee on the Rams’ depth chart?