"It’s weird, I change from a nice little Clark Kent, to an angry superman when I step on the field." –Ra’Shede Hageman 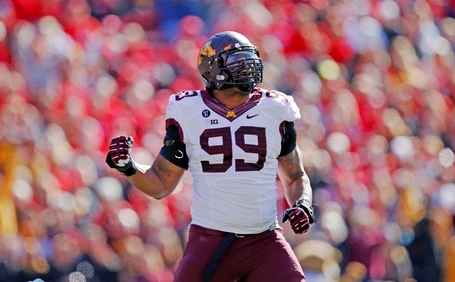 Much has been said about Jadeveon Clowney’s athletic freakishness. Scouts, analysts, and certain TST’ers salivate over his combination of size and explosiveness. Me? I’ve never been a fan. I have another favorite "athletic freak". His name is Ra’Shede Hageman. Lucky for the Rams, the #13 pick makes them the first of his many suitors in the 2014 Draft. Interestingly enough, Hageman the man is as impressive as Hageman the athlete. The same can’t be said about Clowney.

Ra’Shede Hageman was born with the odds stacked against him. His mother was an alcoholic and a drug addict. His dad died before Ra’Shede was old enough to remember him. At the age of 4 his mom was thrown into prison, with Ra’Shede and his brother Xavier put into Minnesota’s foster care system. Both children bounced around from home to home, adopted once but ultimately thrown back into the system when the couple divorced. Hageman didn’t experience a "normal" childhood, never having so much as a birthday party. The rejection festered deep inside of him, creating a volatile, white-hot anger always on the verge of boiling over.

Enter two young newlywed lawyers, Eric Hageman and Jill Coyle. Looking to start a family through adoption, the couple stumbled upon Ra’Shede and Xavier’s profile. In it, Ra’Shede expressed the hope to be adopted by a family that would let him play football. Eric, a former defensive back at Dartmouth, was hooked. The two began the adoption process, finalizing the paperwork in late 1998. At the age of 7, Ra’Shede had his first real family. Things were finally looking up.

The Hageman’s got Ra’Shede involved in all sorts of sports, from football to basketball to baseball. Ra’Shede was that kid, the one that prompts soccer moms to whine about a birth certificate. He was always the biggest and the strongest, even when he played with older kids.

As a high school freshman Ra’Shede dominated both the gridiron and the hardwood, but struggled in the classroom. School was not conducive to a kid like Ra’Shede who suffers from ADD and anger issues. Suspensions had started at a young age and continued as he grew up. Opponents noticed, and exploited, the weakness. Hageman became the target of slurs, trash talk and dirty blocks, anything that would get under his skin. Most of the time, it worked.

Things didn’t stop there. His struggle to find himself and become accepted socially compounded the preexisting problems. Hageman longed to be accepted, but his upper-middle class background kept him on the outside looking in. His white foster family made him feel as if he didn’t fit anywhere. Excuse my bluntness, but he was too black for the white community and too white for the black community. The situation caused him to turn on his parents. He began to adopt a "street" persona and blame his parents for his predicament. In public he refused to be seen with them. At school conferences, he would make them walk down the hall separate from him. The anger continued to smolder within.

The most notable and well-known incident of his anger boiling over occurred during his sophomore year of high school. On the way to football practice with his baby foster siblings in the car, a driver ran a stop sign and sideswiped the Hageman minivan. Ra’Shede erupted out of the passenger seat, storming over to the other car.

"You almost killed my baby brother," he screamed.

Needless, to say, the man was terrified. The incident concerned Jill; she worried of what her son was capable of when he succumbed to his anger.

Things remained the same off the field until Ra’Shede met Giovan Jenkins, the assistant football coach and school disciplinarian. Jenkins garnered respect from the student body, as he was a former football star at the high school and came from similar backgrounds as the rougher portion of the student body.

"You’re the one that’s going to get busted because you’re the biggest one around," Jenkins told him, "Stay away from trouble."

Things didn’t change instantly. The anger wasn’t something that Hageman could turn off at will. He became a regular in Jenkins’ office, but with each visit Ra’Shede began to improve. Jenkins believe in him, told him that he wasn’t like the other kids. Jenkins saw that he was unique, and worked to make Ra’Shede see that too. Hageman began to come around, started to see that he was the only one that could control his destiny. Things were looking up once again.

All the hard work culminated in a scholarship to the University of Minnesota. In college Hageman continued to mature, and only had one off the field incident of any importance. In 2012, Hageman was arrested while trying to break up a bar fight. The anger never truly manifested itself in his personal life during college. Instead, Ra’Shede learned to channel the anger. He harnessed it, focused it onto the football field. Anger, once his greatest weakness, is now the enabler that drove his tenacious motor.

Cons: Inconsistency, Inexperience at the Position

Overview: Ra’Shede Hageman is an undeniable athletic freak. Most impressive is his explosiveness and first step quickness. He flashes the ability to get into the backfield right of the snap and disrupt the play. Even when he doesn’t time the snap right, he still is able to produce enough of a push to make the QB uncomfortable. In the running game, Hageman is great at filling holes and disengaging from blockers. He plays with awareness and a nasty edge. In the end, Hageman is a very raw prospect. A lot of time his pads get too high and he loses his athletic advantage. He isn’t as flashy as Jadeveon Clowney, but his motor and anger makes his ceiling just as high. For all intents and purposes he’s the Tesseract from the Avengers, just raw, unbridled, limitless power.

How he fits: Hageman’s combination of size, explosiveness and edge make him a perfect NFC West prospect. I'd even go so far as to advocate the Ram’s pick him at #13 and stick him in a rotation with Langford for his rookie year. In year 2 he can usurp the starter role. I feel he's just that good. Can't wait to see what he does at the combine.

How good will Hageman make our d-line?