As the NFL Scouting Combine winds today, the focus will turn towards the new league year which begins March 11. The free agency signing period also begins on March 11. What roster moves will the Rams make before then? Who will they target in free agency? Who will the Rams re-sign from their own free agents? The answers to these questions should become clearer in the next 2-3 weeks.

Maybe the Rams need to trade down and get more picks?:

Steelers GM Kevin Colbert, who has spent the past 30 years in the NFL, is calling this "the deepest draft that I’ve ever seen."

Not so good news for Rams fans?:

Ahh...to be just out of college and ready to take on the NFL:

It's official I'm 22 unemployed and living with my mother... All good! #NoBadDays

According to a source, the projection for the 2014 salary cap is now at $132 million.

Rams must get this draft right: St. Louis Post-Dispatch

Could the Rams be looking to bolster their offensive line with a free agent addition? Or should they re-sign Rodger Saffold, and draft additional depth?

Randy Karraker makes a strong argument for the Rams drafting WR Sammy Watkins and S Ha'Sean Clinton-Dix, with their two picks in the first round.

No contract offer yet for Saffold from Rams: St. Louis Post-Dispatch

Rams officials met with Rodger Saffold's representatives this past Saturday. Although no contract offer was presented on the weekend, the Rams are expected to make one very shortly.

GM For A Day: St. Louis Rams: Sports On Earth

Russ Lande shares his off season assessment of the Rams, as part of a series looking at all 32 NFL teams. The secondary, offensive line, and offensive play makers feature prominently in his analysis.

Former GM Jerry Angelo gives an inside look at the process NFL teams go through, in determining which players will improve their respective rosters.

Why Sammy Watkins needs to be a Ram: ESPN NFC West

Nick Wagoner shares his reasons for believing Sammy Watkins should be at the top of the Rams' wish list in May.

Where Will The Top 2014 NFL Free Agents Land?: Over The Cap

Not with the Rams, according to the good folks at OTC. The Rams will not have the cap space to sign the biggest free agents...or will they?

A consensus seems to be forming regarding who will be the top ten or so players in the upcoming NFL draft:

"In talking to a handful of scouts and personnel types, there seems to be a consensus forming in terms of who the top 10 or 11 players are but not in how they would go. Clowney, Robinson, Matthews, Watkins, Buffalo linebacker Khalil Mack, UCLA linebacker Anthony Barr, Michigan tackle Taylor Lewan, Bortles, Texas A&M quarterback Johnny Manziel, Louisville quarterback Teddy Bridgewater and Texas A&M wideout Mike Evans."

Johnny Football left a lasting impression on at least two teams the Rams could be looking at, as potential trade partners with the #2 pick in the draft: Oakland and Jacksonville.

A nostalgic look back at the 1980 Super Bowl, featuring the Los Angeles Rams and the Pittsburgh Steelers:

Les Snead on trading down the #2 pick:

Which DB's have impressed at the combine: NFL.com - Video

Clowney's performance at the combine could mean a lot of things for the Rams. There are a lot of moving parts to the Clowney equation. One thing is for certain: it didn't make the #2 pick in the draft any less valuable.

Could Jim Harbaugh be on his way out as coach of the San Francisco 49'ers?

All of the familiar names are here, with a couple of twists: DT's Aaron Donald and Tim Jernigan, and WR Jordan Matthews.

A tongue-in-cheek look at how Johnny Manziel fared at the combine this past week.

Cap Will Be Higher Than $132 million: Pro Football Talk

Will Les Snead's connections to the likes of Atlanta's Tom Dimitroff play a role in this years NFL draft?

I think Bryan Burwell nailed this right on the head:

"No matter what they do, they can’t go wrong with that valuable draft choice."

2014 NFL Combine: Value of QB's in question as OT's are climbing: CBS Sports

Pat Kirwan shares his observations from the just-concluded NFL Combine.

Clowney could be Rams' ace in the hole: St. Louis Post-Dispatch

Everyone has been talking about teams trading up with the Rams to take a QB. If Jadeveon Clowney is not chosen by Houston, expect the Rams to receive offers for the #2 pick, specifically with Clowney in mind.

Look for the Rams to select a developmental QB in the middle rounds of this years draft. The #2 pick? They will likely try to trade it down. If they remain at #2, the selection will come down to Greg Robinson, Jadeveon Clowney, Jake Matthews, and Sammy Watkins.

The NFL salary cap for 2014 will be announced in the next couple of weeks. From reports, it could be anywhere from $126.3 million to $135 million. For teams like the Rams - with a tight cap space situation - it's a welcome relief. On Thursday I will publish a complete, in-depth examination of the Rams' salary cap situation, both for the team and each individual player. The accompanying chart - courtesy of SB Nation - shows the growth of the NFL salary cap since 2005: 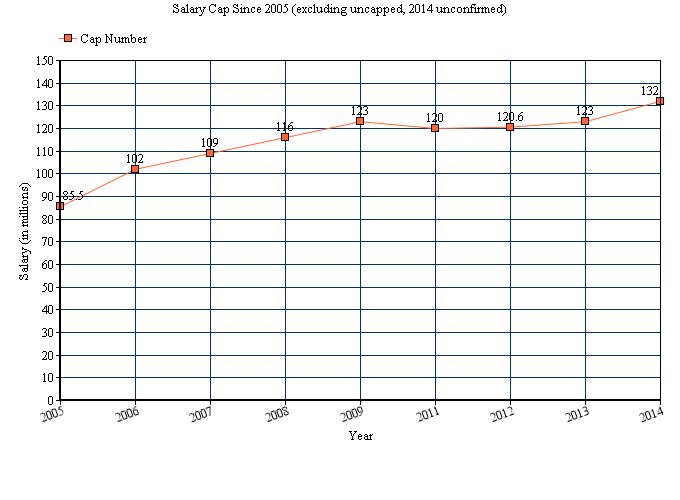 Nick Wagoner takes a look at what drafting OT Greg Robinson could mean, to the future of the offensive line.

Pete Prisco shares his thoughts about the Combine, under-the-radar free agents to watch for, and Johnny Manziel.

What to do at #2? Rams play wait-and-see with Texans: St. Louis Post-Dispatch

I suspect we won't know what Houston will do with the top pick in the draft until very close to the first night at Radio City Music Hall.

The Rams select DE Jadeveon Clowney and OT Taylor Lewan in the first round of the latest mock draft from BR.

The PD's Jim Thomas' weekly question and answer period, on all matters related to the Rams.

Blast From The Past: Classic Rock Wednesday: The Eagles - Desperado

Please have a great Wednesday and a Ramtastic week!