Although not great, the Ram’s offensive in 2014 was a marked improvement over it’s 2013 predecessor. The addition of Jake Long, emergence of Joe Barksdale and elite guard play by Rodger Saffold provided a solid line for both Sam Bradford and Zac Stacy. Unfortunately, the line’s future is in question. Jake Long suffered an ACL injury late in the season and may not be ready to go by Week 1. Rodger Saffold is a free agent who will probably leave for greener pastures and tackle-money. What does that mean for draft day? It means we have to take a good look at Day 2 and Day 3 lineman prospects 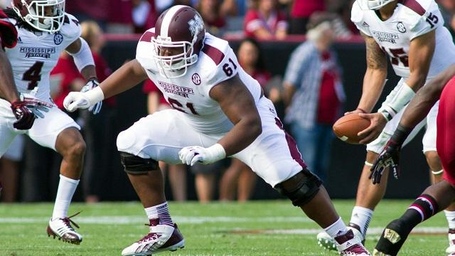 Pros: At 6’3 336lbs with 33-3/4 inch arms and 10 inch hands, Larry Warford immediately comes to mind. Like the Pro Football Focus OROY, Jackson is a thick framed, girthy guard prospect. All 336lbs are well distributed along his thick trunk and massive lower body.

Cons: His arm length is just average, but that’s not a huge concern for a guard prospect. Like most larger lineman, his weight may need to be monitored.

Pros: Jackson is surprisingly nimble for such a large man. He carries his weight well with a very balanced pass set. I really enjoy his knee bend and his ability to mirror interior rushers. His punch is nasty to say the least. He doesn’t have that unbridled "Taylor Lewan" edge to his game, but he’s volatile when provoked and will finish blocks.

Cons: His hand placement can get high and wide at times when his initial punch isn’t quick enough. His awareness is just decent and he has a habit of dropping his head upon contact. This makes him whiff against on faster interior pass rushers at times.

Pros: He’s a true "big mauler" guard prospect. Once he locks on he continues to drive his legs, pushing his defender yards off the line. He’s surprisingly mobile and can pull effectively. He has that nice habit of pancaking opponents. Just like in pass protection, he isn’t afraid to finish his blocks when provoked.

Cons: His awareness and decision making in space needs some major improvement. He gets to the second level effectively but often looks like a lost child at Wal-Mart. He can get held up in traffic at times and does not get to his assignments as a result. If a defender gets under his skin he can get absorbed in one-on-one battles and forget about the rest of the play.

Jackson will never be able to play tackle effectively, but who cares? He’s a guy that can be plugged into the interior of any offensive lines and make an impact.

Jackson is a version of Larry Warford that trades in a bit of mobility for a bit more power. So, it stands to reason that the front office could covet him like they coveted Warford, right? I like Gabe as a guy that could step into a starting role as a rookie and begin splitting running lanes wide open for Zac Stacy.

Gabe Jackson is the #1 guard in my rankings right now and has a firm early 2nd round grade on him. If he’s there at our first 2nd round pick, he deserves serious consideration.