Greg Robinson has experienced a meteoric rise up boards; to the point where he has toppled the consensus favorite Jake Matthews as the top tackle in some circles. He isn’t the unknown quantity he was a month ago. The tape has been poked, prodded, and dissected from every angle by some of the best minds in the biz. All draft nerds enthusiasts are familiar with the lowdown; he’s a big, mauling, athletically gifted, high upside tackle that’s relatively unproven in pass protection. 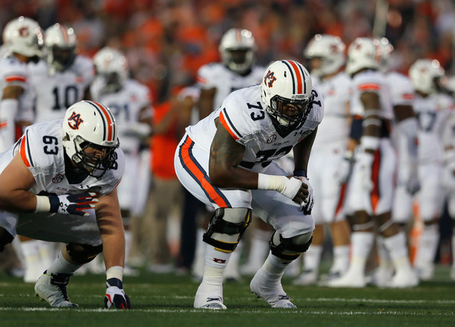 For the article’s sake let’s assume that Greg Robinson doesn’t hold up well in the offensive lineman drills at the combine. Let’s assume he’s exposed to be a right tackle/guard prospect instead of a legitimate blindside protector. Anything could happen, because no one knows how well he moves in his set.

If it happens this weekend I won’t bat an eye. I’d just simply move him down to #3 in my tackle list and up to #1 in my guard list. It’s as easy as that. Bump Jake Matthews and Taylor Lewan ahead of Greg and bump Greg ahead of every guard in the class. There it is. You’re home free. His stock will take a hit but only by virtue of not being a blindside protector. But come on that’s not a problem, at least not nowadays. Guards have begun to be legitimate first round prospects in recent years and two even went in the top 10 in 2013.

So should Greg Robinson still be considered a top-10 prospect if he isn’t a legitimate left tackle? Absolutely. Does that mean he will be taken in the top 10? Not at all. The teams in the top 10 with offensive line needs would much rather select a legitimate left tackle like Matthews or Lewan. Oakland could certainly take him at 5, given their erratic draft history. Atlanta could still be interested at 6 but I have to believe that they’re more interested in keeping Matt Ryan clean than mauling in the running game. Tampa Bay will probably elect to take a pass rusher at 7 or trade back. Minnesota isn’t in need of an offensive lineman at 8. Buffalo needs offensive line help but they need a left tackle, because Cordy Glenn just hasn’t cut it. Detroit has Warford so they don’t need to spend big on an interior lineman this year. Outside of the top 10, things begin to get a bit murky. Tennessee could certainly covet him at 11 and New York would love him at 12.

Hmmm. The Rams seem to be sore out of luck at 13. Can you say trade? It’s completely possible that we can move up from 13 to 10 (Detroit) for just a third round pick. Yeah, it’s worth it. Were we going to get a guard better than Robinson in the third round? No way in hell.

But wait there’s one problem. WE CAN"T GET CALVIN PRYOR! I want him, I want him bad. He’s tough, rangy and hits like a ton of bricks. Assuming we keep the #2 pick somewhere in the top 10 through trades, we can’t get Calvin. So there’s one flaw with the scenario, but hey, Robinson would be a great name to add to the board at the #13 pick if he projects as a guard. And oh, one more thing. Can we get some fresh Greg Robinson pics on google?

Would you be in favor of taking him as a guard at 10?