The Senior Bowl is a great stage to showcase ones talents, and few players did more to improve their stocks than Zack Martin. The Notre Dame left-tackle was once viewed as a Day 2 prospect but is now shooting up draft boards, and possibly into the first round. Is he worth a look by the Ram’s? 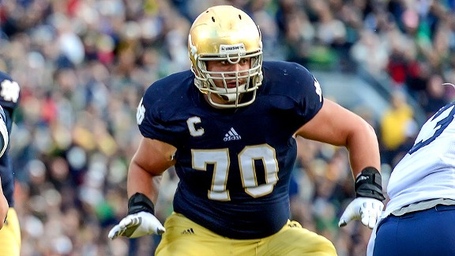 Martin, a 4-year starter, has held down the left tackle spot in South Bend for what seems like an eternity … During his career at Notre Dame he has totaled 52 starts … He has twice been in the running for both the Outland and Lombardi Trophies … All-Independent 1st Team Selection in 2013

Pros: At 6’4 305lbs, he’s a bit undersized but the weight is well distributed on a thick frame. He has the build of a player that could start at guard but also play some tackle. He has the proper foot quickness desired in a tackle prospect.

Cons: Most will consider Martin too small to play left tackle in the pros. His arms are shorter than most (32-1/4 inches) and he isn’t extraordinarily bulky. In many ways, Martin is in a weird grey area between tackle and guard.

Pros: Martin is the most experienced tackle in this class, and it shows. He plays with a savvy intelligence that is unparalleled in this class. He wields a masterful understanding of angles, assignments and counters. He’s very light on his feet and deep in his set, a true natural knee bender. When mirroring he is very smooth and efficient. His punch is moderately strong but very quick. He anchors well against bull rushers for someone his size. His game has a noticeable edge to it.

Cons: His lack of height and length shows at times, especially when he lets defenders get onto his chest. The lack of size allows some faster defenders to effectively rip (placing the outside hand on the tackle and wedging the inside shoulder under the tackle’s pad level) or swim him in order to turn the corner. Even though he’s a natural bender, he stands too tall and lunges when he gets beat around the edge.

Pros: Martin has above-average upper body strength and chops his feet well when driving. He has the plus power to manipulate defenders and open running lanes. He is athletic enough to get to the second level and seek out linebackers.

Cons: He doesn’t hold blocks as long as I would like and bigger defensive tackles have too much ease disengaging at times. His nastiness shows, but he isn’t always able to finish his blocks.

His tweener size and high football IQ will allow him to play both guard spots as well as some right tackle in the NFL. The experience he has compiled while at Notre Dame will make for an easier learning curve. I don’t think he’ll be able to hold down the left side in the pros like he did in college.

Martin brings to the table a skill set that we need right now, a guard/tackle type that can start from Day 1. I’m not sure hoe comfortable I am with having him hold down the left side until Jake Long comes back. His savvy and leadership skills will make him invaluable to the team that takes him this May.

I have a late first round grade on Martin at this point. He’s my 5th ranked tackle and is only a possibility if we acquire Cleveland’s 26th pick or trade back the 13th pick into the 17-26 range. My tackle rankings are as follows:

Who's your favorite tackle thus far?