Although not great, the Ram’s offensive in 2014 was a marked improvement over it’s 2013 predecessor. The addition of Jake Long, emergence of Joe Barksdale and elite guard play by Rodger Saffold provided a solid line for both Sam Bradford and Zac Stacy. Unfortunately, the line’s future is in question. Jake Long suffered an ACL injury late in the season and may not be ready to go by Week 1. Rodger Saffold is a free agent who will probably leave for greener pastures and tackle-money. What does that mean for draft day? It means we have to take a good look at Day 2 and Day 3 lineman prospects. 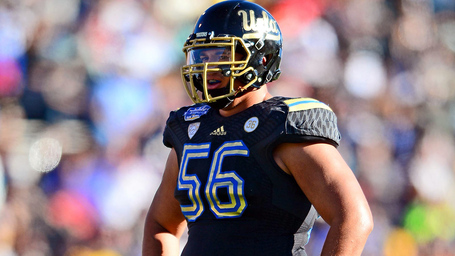 Su’a-Filo is a 3rd year junior, but is 23 years old because of a 2 year Mormon Mission he served between his freshman and sophomore years … Started all 13 games at left tackle as a freshman, named 2nd Team Freshman All-American and a Pac-10 All Freshman Team selection … Started in all 14 games at left guard as a Sophomore, named 3rd Team All American and 1st Team All Pac-12… Has started every game during his career at UCLA.

Pros: Su’a-Filo’s build is just average for the guard spot, with thick legs and a sizeable bubble. He has broad shoulders and a wide base.

Cons: He’s a bit undersized for my liking. The frequency in which defends get onto his chest plate make me suspect that he has short arms. He could get pushed around in the pros, especially in the NFC West.

Pros: Su’a-Filo is quick out of his stance and has average foot speed for a guard. His is initial punch is strong but isn’t the kind that will make an opponents knees buckle. He makes adequate use of his hands and is a very aware player. He appears to have a high football IQ and his head is always on a swivel.

Cons: He’s a heavy legged waist bender, not a natural knee bender. This makes him play too high and with bad leverage at times. He lacks the anchor strength necessary to combat bull-rushers effectively. He overextends at times and finds himself on the ground too much for my liking.

Pros: When Su’a-Filo keeps low out of his stance he’s a very effective drive blocker. He has a natural hip roll and flashes the ability to operate well in a phone booth. At the second level he is very consistent with his assignments and rarely whiffs. He’s agile enough to adjust on the move.

Cons: At times he drops his head upon contact and lets defenders get onto his chest. When he can’t maintain pad level he get’s stood up and pushed around. He can whiff against quicker, 3-tech defensive tackles when blocking in line.

Although he has experience at tackle, the tape at the position isn’t pretty. He gets beat off the edge by speed and is weak against counter moves. His physical limitations will keep him at guard throughout his career.

Su’a Filo will probably never be a Pro-Bowl guard but could compete for a starting spot from Day 1. He’s pro ready but doesn’t have a ton of upside. Regardless, he’s the kind of guy that will quietly crucial to a team’s offensive line. I don’t think he’s suited for our current power running scheme or our division.

I see him as a round 3 player but a team could reach on him in late round 2. Don’t be surprised if he falls into he early 4th.

When do we start grabbing guards?