Despite not participating in the Senior Bowl or other All-Star games, Taylor Lewan's draft stock has remained consistenly high. Is he in the conversation for best tackle? No, that battle is between Jake Matthews and Greg Robinson at this point. Instead, Lewan finds himself as the point man in the 2nd tier of tackles (including Kuoandjio and Martin). Had Lewan declared for the draft last year, he could have been a top 10 pick. The deeper class this year has forced his stock down by comparison. 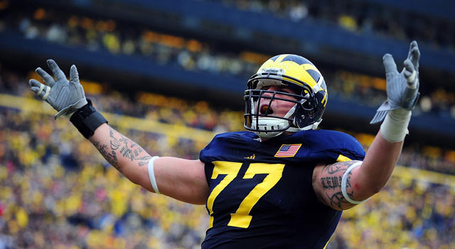 Pros: Lewan stands at 6’7 315lbs (unofficial) with a thick, athletic frame. He carries the weight very well for a man of his size. His arm length appears to be average considering his height. For all intents and purposes, he’s a physical clone of Jake Long wearing #77 for the Wolverines.

Cons: Other than not quite being an elite athlete, there’s nothing to complain about here.

Pros: Lewan is a big technician. His initial kick step is quick, and after that his foot speed is just average. He makes efficient use of his hands, displaying elite strength when holding blocks. His anchor is very strong when faced with a bull rusher, as he rarely loses ground.

Cons: He makes up for his lack of elite athleticism with technique. Because of this he appears stiff both in his set and when mirroring a defender. He receives a lot of holding penalties, especially when he’s beaten off the edge by speed. When he’s not trying to recover by holding, he’s grabbing facemask like we saw against Jadeveon Clowney in the Outback Bowl. He often allows defenders to get under his skin.

Pros: With the Wolverines, Lewan has gained experience playing out of both a 2-point and 3-point stance. His ability to finish blocks and maul defenders off the line is second only to Greg Robinson in this draft class. He can get down the line effectively when he’s asked to pull. He churns his feet well when driving and steers effectively with his upper body.

Cons: Lewan is very aggressive in space, to the point where he either smashes his target or whiffs completely. He gets a lot of holding calls in this part of his game as well.

At the next level, Lewan is best suited for tackle. He doesn’t hold much value as a guard or as someone who can play all over the line. I expect to be like Luke Joeckel in the fact that he is best suited for the left side. He could be serviceable on the right side but not nearly as effective as he’d be on the left.

Lewan gets into the conversation here mostly because of the injury to Jake Long. Let’s assume that Jake isn’t ready to go early in the season and Lewan starts in his place. What after that? Do we move him over to the right side, even though Joe Barksdale is capable of playing at a high level? I like Taylor Lewan as a player but I don’t think he’s the right fit for the Rams.

Who should I write on next?