Up to this point in the evaluation process it’s been Taylor Lewan, Jake Matthews and Greg Robinson who have garnered the most attention. Zack Martin is even thrown into that group at times. One player slowly slipping through the cracks though, is the Crimson Tide’s Cyrus Kouandjio. As a junior he hasn’t participated in any all-star games, forcing his stock to stay stagnant while others are on the rise. He could explode onto the scene at the NFL Combine, but for the Ram’s sake let’s hope he stays quiet. His build, athleticism and upside make him a great mid-late first round candidate to replace Rodger Saffold. 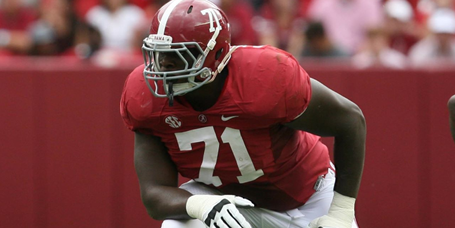 Pros: At 6’6 310lbs (est.) Kouandjio carries the prototypical build for an NFL Left Tackle. He has everything I look for in a tackle’s build (orangutan arms, gorilla hands, broad shoulders, and tree trunk legs) and still has room to grow. If I were in the business of predicting the combine, I’d say Kouandjio will measure in with around 35+ inch arms and 10+ inch hands.

Cons: As with most ‘Bama tackles, there isn’t much to gripe about here. Ideally he could add 5-10lbs of bulk, improving his ability to anchor against bull rushers.

Pros: Kouandjio makes good use of his long arms, often redirecting smaller defensive ends downfield and out of the play. When he gets a good jump on the snap and locks out, the defender becomes a non-factor. He plays with a deep base and natural knee bend. His hand fighting is above average and defenders rarely get onto his frame early in the game. His ability to mirror defenders improved throughout the season.

Cons: He isn’t the quickest out of his stance and his feet are just adequate (and a bit choppy) for the position. When he doesn’t get a good jump on the snap he get’s caught relying on his long arms in order to recover. Conditioning may be a problem. At the ends of many games he is sluggish out of his stance and gets sloppy with his hand placement. We saw this in the bowl when he got beat off the edge several times on the last drive.

Pros: Kouandjio shoots out of his stance and drives well in the running game, often keeping a good pad level. When blocking in-line he uses his plus strength effectively, the defenders knees usually buckle upon contact. He is consistent with his assignments and is very good at sealing off the lane. His athleticism allows him to get down the line quickly when pulling.

Cons: When getting down the line and blocking in space he can miss assignments. He shows the willingness to finish blocks but often fails to do so. Hand placement can get high and wide at times.

Kouandjio has been a starter for two year’s on AJ McCarron’s blindside. He projects well to tackle at the next level but I don’t see him as a plug and play left tackle because of the time he needs to develop. That’s not to say he can’t do it, he would certainly be serviceable in a pinch. His ideal position early in his career is right tackle or guard, eventually usurping the starting role on the left side.

Just because Fisher has never drafted a lineman in the first doesn’t mean it won’t happen. If Saffold leaves and Jake Long isn’t ready to go by week 1, Kouandjio would be able to hold down the left until he returns. I see him being able to play anywhere along our line (Similar to Saffold). We know what Paul Boudreau can do with scrap heap lineman; just imagine what he can do with an athletic specimen like Kouandjio…