The St. Louis Rams 2014 regular season finale had a familiar feel, as the Rams lost to the Seahawks 20-6 on Sunday and finished with their worst record under the Jeff Fisher era [6-10]. Is it time for him to go?

Prior to coming to St. Louis - in 2012 - Jeff Fisher had amassed a 142-120 record in his 17 seasons with the Houston Oilers/Tennessee Titans.  His .542 winning percentage as a head coach might be what he was known best for: mediocrity!  Sure, he’d gotten to a Super Bowl...once.  And Rams' fans know how that ended.

But he was brought to St. Louis to provide experience, guidance, and structure to an inexperienced bunch.  The term "three year plan" is often thrown around, and whether or not it was ever uttered by the Rams’ head coach or not is moot; the fans expect results.  They expect progress.  They expect wins.  They expect to sniff the postseason.
It’s not happening.  The Rams 6-10 record is their worst in the Jeff Fisher era, and while progress can be seen on the field, should the Rams expect him to take this team to the playoffs in 2015?  2016?
Heads are already rolling on Black Monday and head coaches who’ve found success with other NFL organizations find themselves unemployed this morning...

Is Jeff Fisher going to make it through the day?  That remains to be seen.  And your thoughts on the matter should go far deeper than "another losing season, we need to fire him."
We’ve taken the pulse of the fan base on a couple of occasions throughout the 2014 season, in an effort to gauge the fan bases approval of the Rams’ head coach.  It’s pretty evident that winning matters...a lot.
The Rams started the 2014 season with a 1-4 record.  Sam Bradford had been long lost, and it appeared the rest of the team was lost as well.  "Sack City" had one sack, and "Defend Our Turf"...well, that wasn’t happening.
You voted [Oct. 14, 2014]. 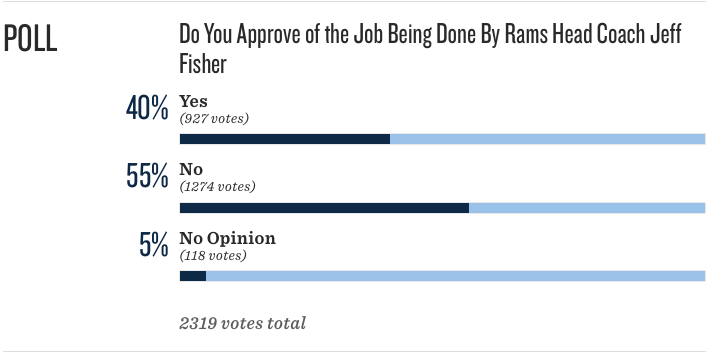 And then Fisher and Co. started to turn things around.  The Rams’ defense started to gel and was stringing together multi-sack games, with wins to match.
The Rams would go on to win five of there next eight in what most considered the most difficult portion of their schedule.  After snagging a few unexpected wins in the "Octet of Pain," they went eight quarters without allowing a single point; besting the Raiders and Redskins for a combined score of 76-0.
And you voted [Dec. 9, 2014].

You’re a fickle bunch, Rams Nation.
The 2014 regular season is over.  The Rams finish yet another season with a losing record.  "Fire Fisher" is in full force, but is it the right thing to do?
While there are some people old enough to drink and operate twitter, there are others that have very valid points...

For those asking for change inside of #Rams org. (spec. Fisher), I challenge you to find a more qualified replacement to accept the job...

If you lose Jeff Fisher, you lose Gregg Williams and John Fassel. That alone should be enough to sign-on for another year.

...or maybe it’s what Fisher needs to do in order to keep the fan base satisfied...

If Jeff Fisher doesn't fire Schotty, will that make any of you Fisher supporters question his leadership?