Happy Thanksgiving, St. Louis Rams fans! Before you jumpstart a day filled with family, food, and football, take a moment to catch up on some Turkey Day news and notes…

If the St. Louis Rams' game against Oakland on Sunday needs to be relocated because of the tense situation in nearby Ferguson, Mo., Indianapolis would serve as the host, according to an NFL source.

Team Very Much Aware of What’s Going on in Ferguson |  St. Louis Post-Disptach

Like the rest of the world, the St. Louis Rams are keeping an eye on the unrest in Ferguson.

The St. Louis Rams got back to work Wednesday, but as has become custom in recent weeks, they used the week's first practice to get some of their key players some rest.

It’s not often three Rams’ players make a Top 20 list...Here's a look at 20 players whose immediate futures could be in jeopardy with their current teams in 2015.

Another season, another year where the Washington Redskins are a dysfunctional mess, only this time, the St. Louis Rams aren’t benefiting from it.

The Rams began on-field preparations for Week 13 with an indoor session on a snowy Wednesday afternoon. Here’s what you should know from practice.

It took the Oakland Raiders more than a year to win a game. It's been even longer since they've won two in a row.

The visiting Raiders look to accomplish that feat for the first time in two seasons Sunday against the inconsistent St. Louis Rams.

The St. Louis Rams (4-7) will take on the Oakland Raiders (1-10) for a second consecutive matchup against a West Coast team, but this time the Rams will have home-field advantage. This article will preview the contest and outline St. Louis' ideal game plan.

Predicting the Final Score of the Rams-Raiders Game |  Rant Sports

As we head into Week 13, the Oakland Raiders (1-10) get set to battle NFC West’s St. Louis Rams (4-7). Both teams stand in fourth place of their divisions, and both are out of playoff contention with the Rams’ 27-24 loss to the San Diego Chargers last week. The Raiders have nothing to play for but pride, but expect them to keep pushing the throttle against the Rams this coming Sunday.

The 2014 Oakland Raiders have a win, and with that out of the way, they can now concentrate on just …winning.

The reaction from fans and media members following the Rams’ gut-wrenching loss to the Chargers last Sunday is what you’d expect: Some blame Shaun Hill for his crucial interception, while others say Brian Schottenheimer should have never put his quarterback in that position in the first place.

Last time out it was Aaron Donald who was the pacesetter in our Race for Rookie of the Year. But two weeks is an awful long time in the NFL, where reputations can be made and broken. In that period we’ve seen one contender pick up his first sack, others make touchdown saving tackles and one make a catch so breathtaking the entire world had to sit up and take notice.

The Raiders are coming off their first win of the season, a 24-20 victory over the Kansas City Chiefs, and head into Sunday’s contest in St. Louis with a bit of surprise momentum.

Although 2014 marked the 20 year anniversary between the St. Louis Rams and the Urban League of Metropolitan St. Louis for the annual turkey distribution event, this year the impact was greater than ever, and not only because the players contributed more funds than ever, more than $35,000 to be exact. This time, the turkey distribution provided much needed affirmation about the strength of St. Louis and how organizations can ban together to create a better region for all.

They have alternated losses and wins their past seven games. If that pattern holds, they are due for a victory over the Raiders on Sunday.
How Each NFL Teams Playoff Odds Have Changed This Season |  FiveThirtyEight

With the bye weeks over in the NFL, it’s time to talk playoffs. Four teams have been eliminated, none have clinched and divisions are up for grabs, whether they be impressive (AFC North) or terrible (NFC South). It’s a good time to check in on how teams have fared in FiveThirtyEight’s playoff rankings.

NFL Thanksgiving Day Stats, Facts, and Turkeys |  NFL.com
Watching Thanksgiving Day games is an annual holiday tradition for NFL fans. Gobble down some of the stats behind the teams, players and turkeys.
Top 10 Thanksgiving Moments [VIDEO] |  NFL.com
Your NFL Team Should Be Thankful For... |  Sporting News
Whether your favorite NFL team is a Super Bowl contender, a No. 1 draft pick contender, or somewhere in that vast expanse in between, Thanksgiving is a time to remember there’s something to be thankful for about every one of them... 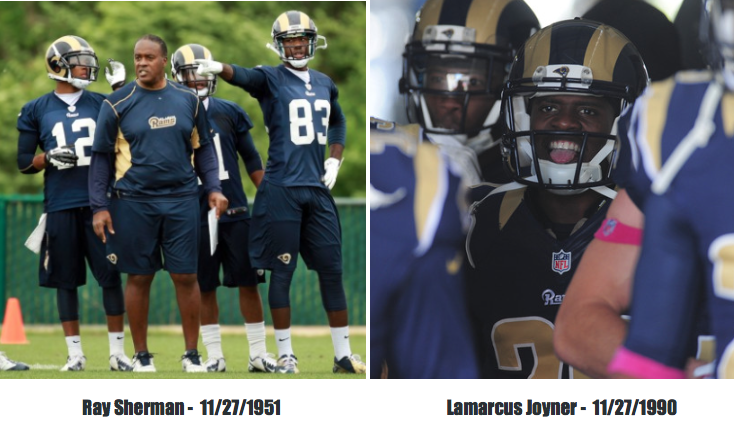