The St. Louis Rams, who boast a 4-6 record heading into Week 12, don’t have NFL experts picking them as winners with much regularity. Let’s see who HAS been picking them through Week 11...

If you follow me on Twitter, you probably know by now that I fancy Mike Ditka [ESPN] picking the Rams as winners each week.  Of that bunch, he’s prognosticated a Rams win 4 times this season, which is the most of any of their thirteen staff members.  It doesn’t say much about the Rams, but Ditka makes his picks with style...

He’s picking them again this week, as well.  And after a big win over the Broncos in Week 11, he’s bringing a few of his buddies with him.

Yesterday, I bumped into a tweet about the crew from Around the NFL making their weekly picks.  A smaller group, and with lesser expectations for the Rams...

This morning, while haphazardly wandering around the interwebs,  I stumbled upon NFL Pickwatch...a site dedicated to rounding up the weekly picks from a cornucopia of football related sites.  Depending on how reliable they are about submitting, there are roughly 130 experts making selections each week.

With so many prominent names, I began wondering if Mike Ditka was indeed the biggest Rams’ fan of the bunch.  Maybe there was another notable name I had been overlooking.  I needed to know.  The search was on!

Let’s have a look at who picked the Rams - through the wins and losses - through the first 12 weeks of the 2014 NFL season.  But before we do, please enjoy this short video brought to you by brutal honesty and awesomeness...

A blowout loss at home was destined to change the minds of a few of these 61 folks, right?

...and suddenly Ditka trails McCown and Walter Football as a believer in this Rams team.  Let’s see what a close win over the Bucs did to help matters...

1 out of 129 picked the Rams
No table necessary.  Only Bleacher Report’s Ty Schalter [2] picked the Rams to win this home game against the Seahawks.  Would an unexpected win against the defending Super Bowl Champions change a few minds about the Rams?
A few, yes.  A lot? Not quite.

Another blowout.  How would this affect about 130 experts opinions on whether or not the Rams could INTO San Francisco and escape with a win?

0 out of 127 picked the Rams
Ever seen 127 people collectively guess something wrong?  Now you have.

1 out of 129 picked the Rams
Again, no table required.  A very soft-spoken, reserved Warren Sapp was the only expert to go with the Rams beating the then 7-1 Cardinals.  Well done, Warren.

2 out of 129 picked the Rams
And that brings us to today.  There’s no doubt that Ditka is going all in on the Rams in Week 12; meaning he will have chosen the Rams for the fourth time this season.  Will he stand alone atop this list of approximately 130 peers, or will a dominant win against another Super Bowl team have folks jumping aboard the Rams’ bandwagon?

...no, he cannot.  A late surge by a pair of unexpected experts means that we’ve got three folks who’ve chosen the Rams as victors through Week 12.
I’m giving the edge to Ditka because of his gumption in Week 11 against the Broncos.  I’d also like to thank Danny Kelly from Field Gulls, and Jeff Erickson from Sirius XM for their continued support. 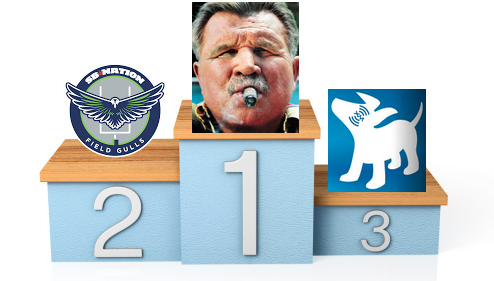