This time last year, Rams’ fans were wondering whether rookie RB Zac Stacy could do something no other St. Louis Rams’ rookie had ever done: rush for 1,000 yards in a season. This year, fans are wondering where he’s gone...

It was in Week 5 of the 2013 that the 1-3 St. Louis Rams decided to make a change at running back.  Trying to effectively establish a ground game with Daryl Richardson simply wasn’t working.  Jeff Fisher and Co. handed the ball over to rookie running back Zac Stacy, who quickly staked his claim as the team’s feature back, and would maintain that status for the remainder of the season..

At this time last year, Stacy had rushed for 569 yards in his first five games as a starter [excluding his lone Week 1 carry].  And with eight games left to play, fans wondered if Stacy could do something no St. Louis Rams’ rookie rusher had ever accomplished:  rush for 1,000 yards in their rookie campaign.

Stacy would ultimately fall 27 yards short of making a bit of Rams history.  Regardless, the fact that the Rams had found what looked to be the reliable back they’d been waiting for since the exodus of Steven Jackson was far more valuable than a single player’s statistical achievement.

Expectations were high in 2014.  Given the fact that he wasn’t given a shot at a full 16-game slate in his rookie season, going for 1,000 yards in his sophomore year seemed highly likely.  The Rams threw fans a curveball in the 2014 NFL draft, though, when they selected Auburn running back Tre Mason in the 3rd round.  A head-scratcher of a pick to some, Mason figured to be heavily involved in the Rams’ running-back-by-committee plans; which the coaching staff intimated to throughout the course of the offseason.  At times, there were even discussions that Mason could be the team’s starter by the time the regular season kicked off.  A relatively unspectacular preseason showing from Mason, though, helped solidify Stacy’s spot atop the depth chart.

And now, eleven weeks into the 2014 season, Zac Stacy has gone missing.  He’s yet to carry the ball 20 times in a single game, is averaging 32 rushing yards per game, and is on pace for 514 yards on the year...which is generous considering he’s carried the ball a combined 13 times for 34 yards in the team’s last five match-ups.
<blockquote class="twitter-tweet" lang="en"><p>Zac Stacy was in for 6 plays on special teams, but for the second week in a row did not see any time at running back.</p>&mdash; Jim Thomas (@jthom1) <a href="https://twitter.com/jthom1/status/531998893324505089">November 11, 2014</a></blockquote> <script async src="//platform.twitter.com/widgets.js" charset="utf-8"></script>
It’s not as if his lack of production is a result of a spectacular breakout from Mason, who is clearly the teams go-to back at this juncture of the season.  Mason, who leads the team in rush yards [270], has only played in five games thus far in 2014, and has three fewer carries [63] than Stacy.  They’ve combined for two rushing TD’s.  Clearly, neither are on pace for 1,000 yards.

Again, the individual statistics aren’t as important as answers.  Answers to questions like "What gives?" or, more simply, "Why?" 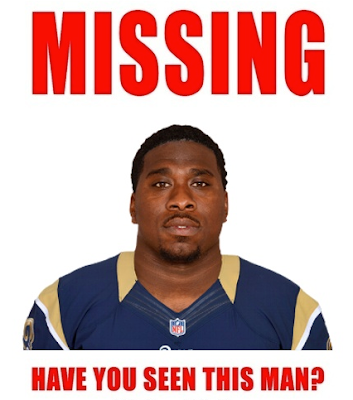 Zac Stacy has gone missing.  Please contact us in the comments below, or on Twitter, if you’ve seen him.  There may or may not be a reward.  There probably won’t be on though.