Rams at 49ers: The TST Experts Make Their Week 9 Picks

The Rams will try to even the season series on Sunday in San Francisco. With injuries piling up, can the Rams defeat the 49ers? The Turf Show Times’ staff offer their predictions...

Share All sharing options for: Rams at 49ers: The TST Experts Make Their Week 9 Picks

The St. Louis Rams will attempt to even the 2014 series score against the 49ers with a road win in San Francisco this Sunday.  Can they do it?  The Turf Show Times’ staff offer their predictions...

I hope that the Rams go 3-3 against the NFC West. The operating word in that sentence is hope. They won't (insert 3k's deep thoughts here).
49ers 30, Rams 17 and that's my optimistic prediction; I have a feeling Rams game threads and twitter feeds will be in riot mode.
Outcome:  49ers win, 30-17

The Rams are coming off a devestating loss to the Kansas City Chiefs, both in terms of the score and accumulation of injuries. The team followed up their upset over the Seattle Seahawks with a strong first possession, giving fans some hope that perhaps this team was turning a corner. That is pretty much where the wheels fell off as missed opportunity after missed opportunity piled up, right along side injuries and penalties. The San Francisco 49ers are coming off a bye week, and while they probably wont have the still suspended(as of Oct 29 at 9:15 PDT) Aldon Smith, should be very well rested and prepared for the matchup.

The Rams will be entering the game without their starting QB, LT, WR1, DE2 for sure and likely without CB 1&2, C, and RG. On the other hand they added the #7 overall pick from the 2012 draft for a mere pitance, so things are looking up! The real question here is going to be in regard to that offensive line. Who is going to be available to play, and how do they adjust to the massive shuffling? Will the OC finally use Tavon Austin effectively? How about picking a running back and giving him the ball 20+ times? Can Stedman Bailey and Chris Givens help fill the void left by Brian Quick? Is anyone listening to me?

I think the Rams rally as a group and play hard, but unless we have a huge individual performance (Quinn, Donald, Austin, Mason, anybody?) I don't see it being enough. Too many injuries, too many moving parts, not enough faith in Coaching staff to compensate.
Outcome:  49ers win, 30-21

The wheels are officially off the bus and will get worse as the season progresses due to now there being film on Davis, the injuries on an already porous OL and the worst pass defense in the league. The 49ers are getting healthy and off the bye week will start making their playoff push. The road to a top 5 pick for the Rams is in full gear as it should be when the playoffs are out of the picture. There is no difference between 2-4 or 6 wins, all are part awful seasons and this franchise has proven that there is no momentum for them year after year.
Outcome:  49ers win, 34-13

He sat alone in the darkness and wrapped himself in the quiet like a blanket. There, the world could not harm him. The world could not touch him. The void was comforting. He sat. And waited. And smiled. And thought to himself, "Ozymandias never died."
Outcome:  49ers win, 21-20

I've said it once, I'll say it again - we already know who/what the Rams are. Undisciplined. Unable to adjust. Now on top of that, the Rams have a plethora of injuries on both sides of the ball. Tank o' die, son. Tank o' die.
Outcome:  49ers win, 31-10

Everything...absolutely everything points to a double digit Rams loss.
The Rams are decimated with injuries, demoralized and the coaching staff have looked helpless and confused. San Fransisco on the other hand is coming off of a bye week and may have Aldon Smith back. They are healthy and hungry to catch Arizona for the division title.
Yes, I am insane.
Outcome:  Rams win, 31-27

The Rams go on the road to fave the 49ers using a patchwork offensive line, and without their #1 receiver. Nothing more has to be said here.
Outcome:  49ers win, 37-10

When you have as many injuries as the Rams do, its hard to be optimistic. Even at full strength, I thought the rams would lose this game. Going into San Fran and winning is no easy task. And now hat they are down multiple starters, I honestly don't know how it's only a 10 point spread. We might a few exciting plays, but I expect the end result to be familiar...
Outcome:  49ers win, 31-10

Since last Saturday, the Rams have been involved in 19 roster transactions involving 15 players. 13 players are on the injury report. The offensive line is banged-up and in total disarray, with 3 starters possibly out of action against the 49ers. Three rookies may start at CB on Sunday. Brian Quick is lost for the season. All of these figures add up to a Rams loss on Sunday. 4-5 days is far too little time to get this patchwork line-up prepared and working together.
Outcome: 49ers win, 31-13

I am having a hard time buying into the teams ability to play a complete game. More-so I am having an even harder time believing that its on the players for "not knowing how to finish". When we played the Seahawks I stepped back and said, 'this is the best coached game I have seen from this staff in quite sometime'. I as Seattle made a push to comeback, the coaching staff made the necessary calls to preserve the win. The fake punt was the highlight, but what about the pushing the ball down the field to score what ultimately became the game winning touchdown? And certainly avoiding the shotgun in running situations did not hurt either.
The staff made the changes because they looked at the record and the previous outcomes and said we have to do something to ignite this team or the season will be lost. Jeff Fisher has a reputation for getting his teams to turn it on in the second half of the season, regardless of the record. I expect the coaching staff will be as desperate as ever, making the changes and calling the calls that need to be made and called. The issue is will they wait too long to do so, and has the team already been lost. When watch the Chiefs game I saw something I had not yet seen from this team. Once the Chiefs got up big late, they quit. They were no where near as competitive as they had been in other games or even earlier in this one.
I question if this team is ready to take a stance.I called Ogletree out during the bye week, so far he has only gotten worse. Also during the bye I said that TJ McDonald is playing like a player that improved during the offseason, the only question was, will it continue? It has not, it is actually the exact opposite. With so many injuries and players showing signs of regression its hard to see anything the coaches doing being enough to win this game. Truthfully, we will need a Philly-esque type of performance from Austin Davis as well as the most dominating performance we have seen all season from the D-Line to win this game.
Outcome: 49ers win, 27-17

The Rams go into this weekend as a team in flux. I thought the Rams would fair better against the Chiefs last week. Boy was I wrong. I have no such optimism for this game. Between injuries and a damaged team psyche, the Rams won't do very well in the city by the bay. My suggestion to fans is to use this game to watch for positives from our youngest players. Look for the promise those guys bring this club. Take note of those players who WOW you, and just ignore the ones that stink up the place, they'll be gone soon enough.
Outcome:  49ers win, 38-21

Warning: This prognostication may contain bourbon. So here’s how I see it...the NFL is a fickle beast, and I’m pretty darn terrible at prognosticating the victors; as exhibited by my often cash-deficient wallet.  That being said, trying to predict what’s going to happen on Sunday is an act of futility for yours truly.
But I always prioritize football over my 401k and my [potential] children...
The Rams seem to win games I predict them to lose, and I’ve seen what a less-talented Rams’ team [see 2012 when they went 1-0-1 against the 49ers] can do. A victory, on the road this Sunday, is possible.
The Rams signed Mark Barron because of 80-yd Brandon Lloyd TD’s. Not really, but I’m willing to bet my mortgage he doesn’t do it again.  That’s the progress we’re looking for here, folks!
Chris Long won’t be playing, but he’s still saluting!  %BlessYouChris 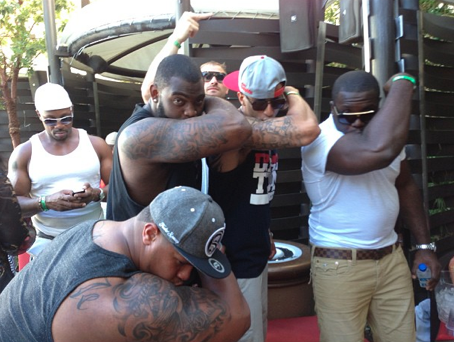 I’ll go ahead and presume, with more carries than catches, that Tavon Austin runs it down the throat of the 49ers’ defense.  An offensive playbook that once read "Ay don’t understand," now reads "¡Ay, caramba!"
Kenny Britt is now WR1.  The Rams will thrust it into the red zone, and that’s where Kenny Britt will catch them with their pants down. ¯\_(ツ)_/¯
[An injured] Long story short, I’m picking the 49ers to win because, in doing so, the Rams win.  It’s not a science, but I’m submitting this post from a cardboard box...so what do I have to lose?
Outcome:  Rams win, 27-24
*******
Eleven TST staff members weighed in on the Week 9 matchup at San Francisco.  Nine of them picked the 49ers to win.  One of them self-diagnosed himself as insane. The other’s thoughts are brought to you by Blanton’s..."The Original Single-Barrel Bourbon."