In 2013, the Rams lost their home matchup against the Seahawks in the waning seconds of the game.  With the ball at the 1-yard line, they opted for a corner fade - from Kellen Clemens to Brian Quick - as opposed to pounding it into the end zone with Zac Stacy; who was having success on the ground.  In what was one of the more disappointing play calls, and play executions, in recent memory, the Rams fell 14-9.

Will the Rams find themselves in a position to put the Seahawks away again while the clock expires? Fourteen TST staff members provide their predictions on the outcome...and it’s pretty clear the answer is "no." 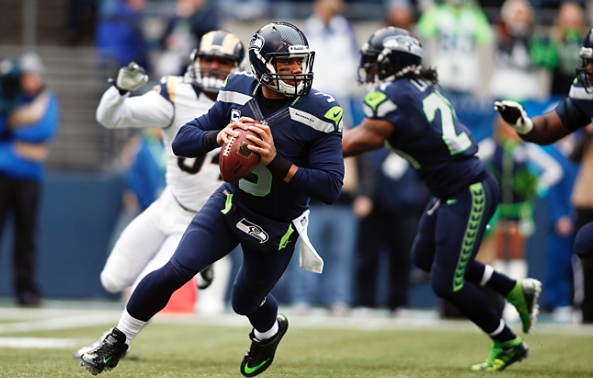 The Rams are coming off another very inconsistent performance. Or should I say it is very consistent with how they have played this year? Consistently inconsistent? OK this is getting confusing.. much like the season so far. The big question is, can the Rams play a COMPLETE game. My gut tells me not this week.

Although the 49ers represented a good opponent, the Seahawks coming off a tough loss to the Cowboys represent a great opponent coming in with a chip on their shoulder. And as much as I hate to admit it, the Seahawks should outcoach the Rams this week and come out with a pretty easy victory.
Much of the same will be seen, but it will be a little uglier.
Outcome:  Seahawks Win, 34-10

The Hawks are coming in off a very tough loss and the Rams are coming off the same old same old. The Rams are just not good enough on or off the field. It on the coaches and players, players seem to have limited football instinct in making pee wee football mistakes week in and week out. The only chance ot keep it close would be turnovers which does not usually happen for Seattle and Davis seems to throw a pick 6 every game.
Outcome:  Seahawks Win, 31-17

I'm gonna get up, probably won't shower (cause it's Sunday), make some coffee, let my dog run around outside. I can't forget to check my fantasy team, there's always those players that are "Q" but actually are playing, so I don't wanna screw up and not start them. Hopefully I'll catch that Rob Riggle segment that FOX does, some of them are actually funny. How many people watch the Red Zone channel? It's pretty awesome, cause you can see a lot of scores and they show you highlights even if they miss a key play. Anyway, I'll probably make some breakfast, but it's Sunday and I'm usually lazy, so coffee might be it for me, I'll play that one by ear.

So far this season the Rams have demonstrated an ability to lose games by beating themselves. This longstanding tradition continues this Sunday when the Seahawks come to town. You thought last week was bad? Just wait til Sunday. The Seahawks were soundly figured out by the Cowboys, but that loss means as much to the Seahawks as a gnat on a horse's ass.
The Rams are failing to make adjustments, routes are being run all wrong, and fans are sick and tired of spending money to watch a team beat itself. The Rams are so close to being good, but close won't help them beat good teams.
Outcome:  Seahawks Win, 38-17

The Octet of Pain rolls on, but in true 2014 St. Louis Rams fashion the opponent the Rams can't seem to beat is themselves. The Seahawks have their fair share of injury and chemistry issues, and the Rams will jump out to an early lead for the third straight home game. Just like each of the previous two home leads it shall be short lived. The Rams pass rush will continue to be ineffective, and Greg Williams will blitz one time too many allowing Russell Wilson to return to the media's good graces. If the Rams defense can contain Marshawn Lynch like they did Frank Gore, the team should be in a position to win/tie it late yet again. Once again Austin Davis' gunslinging ways will seal the Rams fate. If I had any reason to believe the Rams could put together even 3 quarters worth of quality football I may pick them to spring an upset, however it seems 1.5 quarters is about all they can muster. It wont be enough during the Octet of Pain and the Rams home record will fall to 0-4.
Outcome:  Seahawks Win, 20-17

The Rams will play hard get to an early lead and then Austin Davis will throw a couple of picks. The Rams won't be able to run the ball at all and the receivers will probably be covered. So yeah.
Rams fail and enter the Mariota sweepstakes.
Outcome:  Seahawks Win, 24-10

After last Sunday's loss at home to the Cowboys, expect the Seahawks to come out focused, intense, and on fire against the Rams at the EJD. In last years home game, the Rams were a goal-line stand away from defeating Seattle. The key to keeping this years game close is a repeat of last years performance, where the Rams rushed for 200 yards, and limited the vaunted Seattle ground game to 44 rushing yards. This game is eminently winnable, if the Rams can minimize mistakes, penalties, and turnovers, and play two full halves of consistently good football.
Outcome:  Seahawks Win, 23-17

Bruh, the Rams best themselves. Every. Single. Game. It won't be different this time around. They'll either have an early lead, end up blowing the lead & losing. Or…they'll make a late comeback, but fall short at the end.
Outcome:  Seahawks Win, 24-17

Unfortunately the Rams won't stand much of a chance in this match up. In my honest opinion, no back in the NFL has looked better than Marshawn Lynch this year. I have never seen him look more explosive. An even more explosive Lynch is not a good thing. So far the Seahawks for whatever reason has held back with their use of their most reliable weapon. But I am having a hard time seeing them do this against the Rams. I would be shocked if Lynch didn't see 18 touches or more in this game. Meanwhile for the Rams, well, I guess when it rains it pours. It will be some tough sledding going against this Seahawks defense. Its time to show off those creative juices. Either that or someone will have to have a breakout game. Whether it be Tavon Austin, Steadman Bailey, any of the backs, or anyone really. Someone needs to step up and fast. Oh and the craziest part to all of this is that I didn't even mention...Russell Wilson. The Seahawks just lost at home and surely they are not to thrilled about it. Their focus will likely be through the roof. Meanwhile the Rams are probably going to look unstoppable at some point during the game. The question is will it only have been for one quarter?
Outcome:  Seahawks Win, 34-20

The Rams held no punches against the 49ers on Monday night, and I'm not referring to Ethan Westbrooks and Alec Ogletree. On offense, they tried nearly every trick in the playbook, new and old, in their valiant, yet feeble effort to remain relevant in the NFC West. They will now attempt to do the same this week against another rival, the Seahawks, who will be hungry and angry following a surprising loss to the Cowboys. Oh boy...
I expect this game to look quite similar to the last, with Austin Davis again completing a couple heroic, Houdini-esque passes into coverage. More importantly, I expect the defense and Gregg Williams to finally begin getting on the same page, ideally understanding that deep coverage is crucial just before halftime. This game should be close for much of the duration; nonetheless, the Rams appear destined to continue their skid for at least another week.
Outcome:  Seahawks Win, 27-16 [but the Rams record a sack]

The defending champs aren't playing their best ball right now, but that hardly matters when playing the Rams. Austin Davis will face arguably the leagues best secondary and SEA will bring the heat just as much, if not more, then San Fran did. Until the Rams stop making stupid mistakes at critical junctures in games it will be more of the same. Rams will find a way to keep it close, but it won't be enough.
Outcome:  Seahawks Win, 24-17

Over the years, I have been witness to many a Rams loss...hell, who hasn't? Monday's loss to the 49ers was different though, damningly different.
Last season, in the first game against the Seahawks, freshly without Sam Bradford, the Rams battled til the last and nearly came away with the upset. If you are going to lose, that is the way to do it. On Monday however, with a solid lead, late in the second quarter, the Rams had a couple of setbacks. First a horrendous interference penalty on Jared Cook, then that 80 yard bomb for a TD. After that, the Rams just seemed to give up. They looked beat, they acted beat. It was more than a simple momentum shift, they gave up.
After the game, Jeff Fisher had this to say, "The big thing about it is you don’t change what you’re doing," Fisher said Tuesday. "What we’re doing here is right. The players are coming to work, they’re having fun, they’re working hard." That may possibly be the worst thing I have ever heard from a coach, especially one that is 1-4.
This team is demoralized. No way they beat the Seahawks.
Outcome:  Seahawks Win, 31-17

We breathe. We breathe and we hope. We hope that our next breath is not our last.

The Rams bring the Seahawks into the Edward Jones Dome with hope asunder, with belief bereaved. I know not whence we learned who we be, but I caress the tomorrow that brings me the reprieve of the past.

Rams 31, Seahawks 24. I sleep before no one. The night grants me a morning I do not yet see.

In regular season play, the Seahawks are 16-2 against the Rams dating back to 2005.  Having seen what I’ve seen from the Rams in the first six weeks of the season, predicting a third series win...in nearly a decade...just isn’t going to happen.  I could say more, but if you read any of the prognostications above, you probably can’t wait to hit the "back" button.
Outcome:  Seahawks Win, 27-13
*******
In case you didn’t catch it, only one of the staff members - whose sanity is clearly not in question - picked the Rams to win.  It’s sad.  Only six weeks in, and with five games under their belt, the 1-4 Rams appear to have lost the faith of their fan base.  It could also be that they’re playing the reigning Super Bowl Champions, which is no easy task.
Average out the scores predicted above, and the TST squad sees something along the lines of a 28-16 victory for Seattle.
But what the hell do they know?  Go Rams!