The Rams Will Host the Seahawks this Sunday. Despite their record, take the “Any Given Sunday” approach...you need to get up for this one!

Moments after his team's 31-17 loss to the San Francisco 49ers, St. Louis Rams quarterback Austin Davis had no interest in finger pointing or passing out blame for the Rams' shortcomings.

On a recent Friday afternoon following practice, a group of reporters huddled around the locker of Rams WR Brian Quick.  The third-year receiver was nowhere to be found. So the group waited. And waited.

The last thing Jeff Fisher expected in mid-October was a 1-4 record in what was supposed to be a breakout year. But that’s what it is for his Rams, and worse yet, next up on the schedule are the defending Super Bowl champion Seattle Seahawks.

While providing the opening statement for his press conference on Monday night, it didn’t take Jeff Fisher long to cite the tipping point in the Rams’ 31-17 loss to the 49ers.

"We got up and got some points, and then obviously the chain of events that happened before half were pretty much hard for us to overcome," Fisher said. "One was the offensive pass interference call on (tight end) Jared (Cook). That’s a points swing. We’re in field-goal range, we have a pretty good kicker, might even be seven (points)."

Dean Blandino Recaps the Cook Offensive Pass Interference Call [VIDEO]|  NFL.com
The NFL’s VP of Officiating takes us through the offensive pass interference call called on Rams’ TE Jared Cook in last week’s Monday Night Football matchup.  Like the rest of the world, he knows it was a horrible, horrible call...

The Seattle Seahawks haven't had as much success rushing the passer as they expected to open the season. But then, neither had the San Francisco 49ers. If the St. Louis Rams don't get their pass-protection issues solved in this short week, they could be the cure to what ails Seattle's pass rush when they visit St. Louis, just as they were for the Niners.

St. Louis Could Be Ramping Up Efforts to Keep Rams |  Pro Football Talk

As talk intensifies that one or two franchises from the Rams, Raiders, or Chargers will return to L.A. (yes, all three once played there), the powers-that-be in St. Louis could be trying to ensure that the Rams don’t make the move.

Twenty-eight years ago, then-Los Angeles Rams coach John Robinson asked his future Hall of Fame running back if he could handle 30 carries in a game.

Rams May Go Running Back By Committee |  St. Louis Post-Dispatch
Thanks to a strong showing from rookie Tre Mason in his NFL debut, the Rams’ backfield seems to be getting a little crowded. And coach Jeff Fisher is fine with that.
Quick Thoughts on Rams Loss to 49ers |  Ramblin’ Fan

Another week, another disappointing loss. However, unlike most weeks, this Rams loss wasn’t hidden in the early Sunday slot, but, rather, displayed for the whole world to see on Monday Night Football.

Coach Killers is your weekly look around the league at those performances, decisions and "Wait, what did he just do?!" moments that put the guy in charge squarely on the ol' hot seat.

Up Next - St. Louis Rams |  Seahawks.com

The 3-2 Seahawks will play their next two games on the road, starting with Sunday’s matchup against the 1-4 Rams in St. Louis.

In trying to glean the slightest bit of promise from yet another forgettable overall performance, the Rams rookies took advantage of some increased playing time. At this point, that should be a trend that holds up through the rest of the campaign if for no other reason than, "Whaddaya got to lose?" 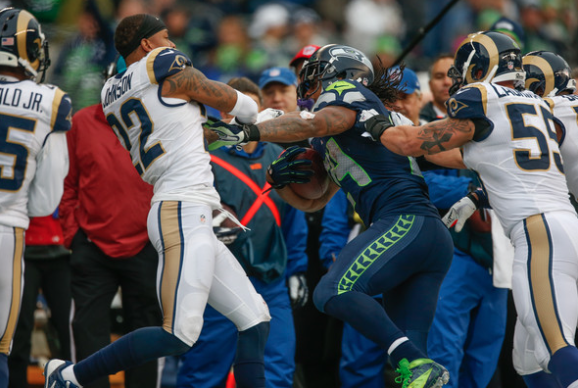 Would YOU Foot the Bill for a New Stadium? |  KSDK.com

A source close the negotiations between the St. Louis Rams and the city said a decision to keep the team in the city would come down to a vote. Specifically, one asking taxpayers to foot the bill to build the Rams a new stadium.

Seattle has gone through the gauntlet to start their season, facing teams with a combined record of 17-7 (Seattle games excluded). A game against the now 1-4 St. Louis Rams is a welcome sight on Seattle's schedule.

Is it Time to Play Robinson at Left Tackle? |  Arch Authority

Make no mistake: there were plenty of negative observations to take away from the St. Louis Rams’ 31-17 Monday night loss to the San Francisco 49ers. If there was one thing that stood out above all others, especially in the first half, it was that left tackle Jake Long is no longer the player that earned the number one overall selection in the 2008 NFL Draft, made four straight Pro Bowls from 2008-2011, and earned a four-year, $36 million-dollar contract from the Rams prior to last season.

Should Jeff Fisher Be On The Hot Seat? |  Ramblin’ Fan

The 2014 season has certainly been one to forget for the St. Louis Rams. At 1-4 through five games, the team is off to its worst start since 2010 when they started 0-6. Because this team has the talent, many have started to point the finger at Jeff Fisher.

And, in case you missed it, we offered the fans an opportunity to give their two cents on the matter.  We heard the message loud and clear...

Considering the St. Louis Rams had a two-touchdown lead and lost by two TD’s, coach Jeff Fisher found a lot to like in Monday's 31-17 loss to the San Francisco 49ers.

With the rules being as slanted towards offenses as ever, it's more important than any time in the league's history to have a franchise quarterback. Teams with them do anything they can do keep them with $100 million contracts, while organizations without them leave no stone unturned in their quest to find the next Brady or Brees.

Here are five quarterbacks who may be on the move in 2015 if their performance doesn't improve soon.

In their first matchup this year, the Seattle Seahawks travel to St. Louis to take on the Rams in an NFC West clash. These two teams don't like each other, and it usually is a physical game with tempers flaring between the division rivals.