Chances are you haven't heard his name before. Expect to be hearing it a lot more, he may just be this year's John Cyprien. Let's take a look at Lindenwood's big shut-down corner. 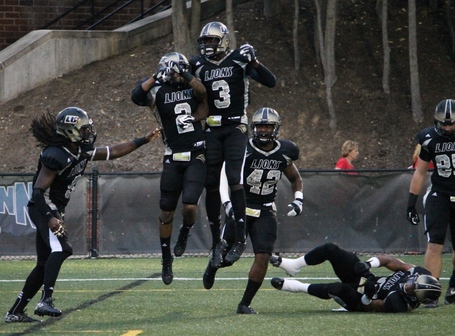 Overview: This big-bodied corner is the premier player in Lindenwood's secondary. He possesses a tall, long frame and still has room to add bulk. Average top-end speed but shows good closing speed on tape. I expect him to rise into the early 2nd round, maybe the late 1st.

Strengths: Versatile in the coverage he can play. He excels at press man, using his big body to jam receivers at the line. Shows good instincts and the skills to read the QB's eyes in off-man and zone. Great at getting position and winning jump balls. Stiff hips can be a problem with big corners but he appears to play with a 6-foot corner's hip fluidity, contrary to his size. Uses his hands well when striking receivers at the line and breaking up passes. Body control is above average.

Weaknesses: When his technique is sound, he is able to cover up his lacking top-end speed. It becomes a problem when his pad level rises and he plays too tall. When that happens, he gets burned on Go's and Deep Posts.

Fit: Right now, an A+ draft for me would include HaHa Clinton-Dix (Alabama), Greg Robinson (Auburn) and Pierre Desir. The deep help at safety and the physical presence of Desir would allow us to play less soft coverage. Would match up well with the NFC West's receivers.

The tape on him is frustrating in it's format. For simplicity's sake, here's two pass break ups that showcase his closing speed, hand use and instincts. He is the corner at the bottom in both clips.

Do we need a corner high in the draft?