The book hasn't quite closed yet on the RG3 trade as there is still a great chance that Snead and company will wheel and deal with the number 2 overall selection this May, but now that we have a pick number in the 2014 draft, we can at least begin to evaluate the Expected Value that the Rams received from the RG3 trade and evaluate the players so far.

From an Expected Value perspective, the Rams knocked it out of the park. We can look at it from two different directions, first and foremost - the original trade where the Rams hit a home run and then how the trade has evolved through other trades that the Rams have pulled off since and the Rams hit an even farther home run. Ok, enough forced mixed sports metaphors, let's take a look.

I've detailed Expected Value and some of the research behind it in my previous FanPost. Check that out if you haven't as we are going to be building off some of that. All of the numbers I use are AV, which is all over the pages of Pro Football Reference. (The best site in the universe.)

The number 2 overall pick is worth 64.4 points of Expected Value. With the original trade, the Rams extracted a surplus of 112 points of Expected Value in their new picks. (The two #2 overall picks cancel themselves out and the #6, #39, and #22 are the surplus.) With the way the Rams cascaded their picks by trading around, they netted a surplus 149.6 points of expected value! (And that includes the 7.5 points of expected value they traded away in addition to a pick in their bounty to trade up for Zac Stacy. They also traded away a 2015 7th rounder in the process, but that's negligible at this time.)

I'll shut up and let the chart do the talking: 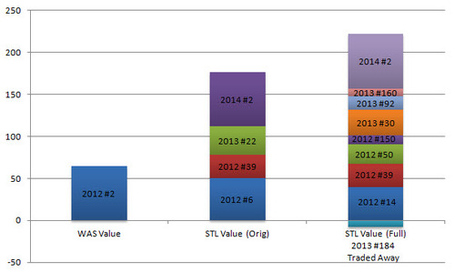 But, you say that maybe RG3 was one of those rare players that defies the averages and performs better than the average and therefore is worth the bounty and has enough value to rival the entire package of Rams players combined? So, let's take a look at the real AV provided by RG3 vs the players the Rams picked instead.

In the first year, it was certainly worth it for Washington as the Rams had not yet even yielded 2/3rds of their bounty from the trades. (It also didn't help that the Rams got a whopping 0 AV from Pead and Rok Watkins.) 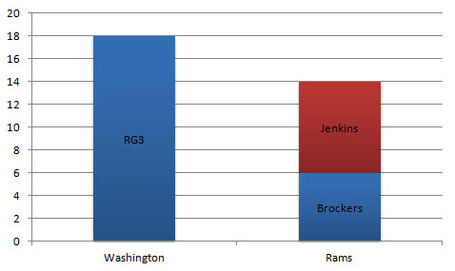 Jenkins and Brockers put up 14 AV together, but RG3 put up 18 by himself for Washington. The fact that this is even reasonably close is a bad, bad sign for Washington going forward. 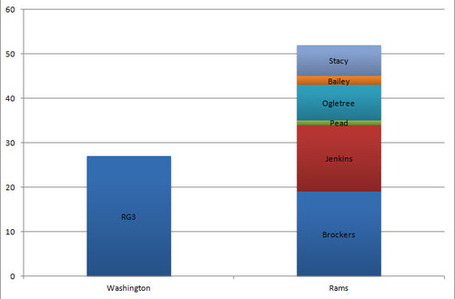 Oh geez, it is lopsided already!

RG3 has 27 AV in 2 years all by himself, which is pretty good, but just Brockers (19) and Jenkins (15) together have already surpassed him. Pead (1 AV), Ogletree (8 AV), Bailey (2 AV) and Stacy (7 AV) are all just icing on the cake. Rok Watkins had 1 AV in 2013, but since it was for Kansas City and not the Rams, I didn't include it in the calculation, since the Rams were not receiving it.

The Rams have already bossed this trade in both theory and reality. The great news is: there is so much more value to come for the Rams! On the other side, this could become historically ugly for the Redskins. (But, we will have to look at that a few years in the future.)