The St. Louis Rams own the second overall pick in the 2014 NFL Draft. They’re not going to keep it, though.

The Atlanta Falcons, who had the second fewest number of sacks in the NFL [32], have fallen in love with Jadaveon Clowney. In an effort to immediately rectify their pass-rush woes, they pick up the phone, call old friend Les Snead, and move up to No. 2 to select the fiercest defensive end in college football.

In doing so, they swap spots with the Rams, giving them the 6th overall pick. Additionally, the Rams obtain the Falcons' 2nd round pick [No. 37].

The Falcons got their guy, so what do the Rams do? They make picks contrary to Jeff Fisher’s draft history, and draft FIVE offensive players in the first three rounds, of course!

Before we jump into the draft madness, here are a few things to note:

* Harvey Dahl, Scott Wells, and Rodger Saffold are no longer Rams. Saffold, despite being injury-prone, has shown how his versatility enables him to play anywhere along the offensive line. He thinks he should be paid like a tackle, and one team will agree. For Wells and Dahl, age and injury concerns conclude their tenure with the team.

* Sam Bradford is going to be the starting QB in 2014. What you’re about to witness - in terms of this draft - is why he’s going to have the best season of his career. Wave bye bye to the "vanilla" offense of yesteryear.

* This mock is based on Seniors or players who have committed to the draft.

And without further ado…

Fresh off a 16 catch, 227-yard, 2-touchdown performance in the Orange Bowl, Watkins immediately gives the Rams the physical, powerful receiver it’s been missing for so long. If the Rams are looking for a red zone threat who has no issues going vertical to grab the ball, they’ve found their man…

Here’s where I’m probably going to lose you. I know Jeff Fisher has never drafted an offensive lineman in the first round of any NFL draft…ever. Lewan is the smart pick here, though. An All-American in 2012, Lewan chose to go back to Michigan for his senior year, and his draft stock may take a bit of a hit as a result. Recently, ESPN’s Todd McShay reaffirmed his belief in the Wolverines huge left tackle:

I’ve got him as the ninth overall player/prospect with kind of a middle-first-round grade. There’s been a little bit of inconsistency. But I still think he’s, obviously, one of the top 10 players. I think he’s one of the premier players in this class.

My thoughts on this pick are simple. Jake Long’s torn ACL and MCL are putting his ability to start the 2014 season in jeopardy. Joe Barksdale has performed admirably at right tackle, but with Rodger Saffold no longer on the team, the Rams need to look for depth - and the future - with a legitimate tackle. Chris Williams won’t cut it. Mike Person is not…that person. 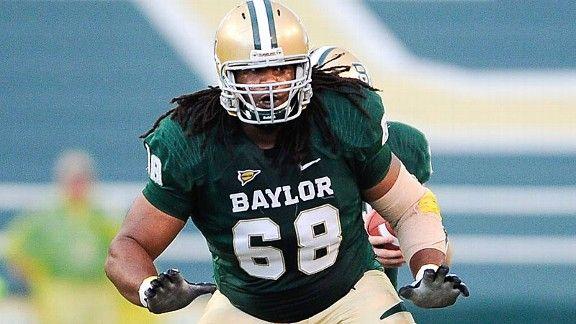 I’m sure you saw this one coming! That’s right…the Rams take back-to-back guards in the 2nd round. As aforementioned, Dahl and Saffold are gone. The Rams can’t rely on Shelley Smith, and we have no clue what Barrett Jones is capable of in the NFL. It’s time the Rams put their concerns about an offensive line behind them. Line these two beasts up in front of Sam Bradford and Zac Stacy and watch this offense thrive. The time has come for the Rams to have a "Plan B" in regards to their QB situation. Austin Davis came into the preseason as the team’s backup QB. He didn’t even make the squad. Kellen Clemens performed admirably following Sam Bradford’s season-ending injury, but he’s clearly not the answer…and the Rams new it in the preseason. As we saw in 2013, many backup QB’s stepped in and their offense’s didn’t miss a beat. It’s time for the Rams to have that option, if needed. If they’re going to wait any longer to draft a QB, they might as well just stick with Clemens. Plus, who wants to break up the Boyd/Watkins connection?
…so I know what you’re thinking. "What about safety?" or "What about OLB?" While I agree that those are positions of need, I’d much rather address them a) later in the draft, or b) in free agency. The Rams’ defense is a far superior unit, and it’s time the offense struck fear in it’s opponents.
Bolstering the offensive line [for years to come] provides bigger gaps for Zac Stacy [and Co.] to run though, and it provides Sam Bradford with more time to find a much-improved corps of wide receivers.
Let’s hear it. How would you feel if the Rams selected five consecutive offensive players in the upcoming 2014 NFL Draft?