So much has been said of this young man out of Clemson. He brings to the table and combination of athleticism, ball skills and playmaking ability that is rare in a prospect. At the Orange Bowl, he ravaged the Ohio State secondary and once top-corner Bradley Roby for 16 receptions, 227 yards and 2 touchdowns, including this clutch grab: 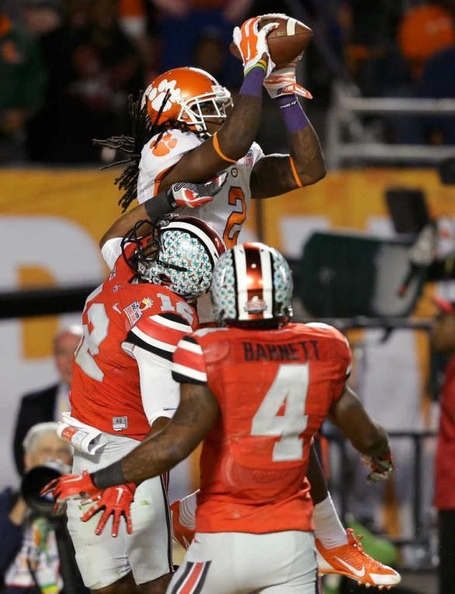 It's undeniable that he is a tantalizing player, but what makes him so great? What are his weaknesses? How will he translate to the NFL? Is he worth a top-5 pick? Is he a legitimate #1? It's time to find out.

Unofficially, ESPN has Sammy Watkins listed at 6'1 205lbs. Those measureables are reasonable and I expect him to be anywhere from between 6'01/2 to 6'1 3'4 at the combine. 205lbs is also appears accurate and would be a good starting weight for a rookie receiver. What is a cause for speculation is his 40 time. While gaining the reputation of having elite top-end speed, claims are starting to surface that he isn't quite as fast as he's made out to be. His unofficial 40 time in 4.48s, which is a legitimate possibility. He isn't Tavon, but he's speed is still very above-average. Expect anywhere from a 4.40 to a 4.50 at the combine with some ridiculous splits. His acceleration off the line and out of cuts is unparalleled in this draft class. Couple that with his exceptional agility and you've got a dangerous playmaker. But is he a legitimate #1? I say yes. Some say he's undersized for that position but I don't believe it's true. Both Isaac Bruce and Torry Holt were no larger than 6'1, so are you going to tell me that neither of them were a legitimate #1? I don't buy it, I still believe that Sammy can break press and pluck jump balls out of the air. Case closed.

I'm gonna go as far to say that Sammy has the best hands in the class. There I said it. He just plucks balls out of the air mid stride like he has glue on his hands. When the ball is contested, he attacks. Even though he's a tad undersized he isn't afraid to get physical with larger corners. He utilizes exceptional body control to get position and win most of his jump balls. Easy grade here.

Ah, the epicenter of Mr. Watkins' shortcomings. At Clemson he ran a limited route tree, a lot of Go's, Skinny Posts, Drags and Screen Passes. When trying to nitpick for weaknesses like Sammy's critics do, it's easy to forget that only the rarest of college receivers are great route runners right away. It's one of the main reasons that receivers take so long to reach their full potential. NFL corners are savvy, they figure out receivers and get into their head. It becomes a chess match, and they'll try to take away routes and force the rookie out of their comfort zone. Rarely do we see complete route runners like A.J. Green (and Stedman Bailey for that matter) right out of college. Although rough route running is the norm for young receivers, he still needs huge improvements.

If only there were more Stedman Bailey's in the world. It's unfortunate that a lot of receiver's are such divas, ala Dez Bryant and Chad Johnson. Fortunately for the Rams, Sammy Watkins isn't one of those guys. He's a very grounded, humble and mature individual. He came out of a tough neighborhood, which isn't too uncommon, but he was never a troublemaker. High School teachers and coaches are on record as saying that he never got into trouble in High School. His coaches at Clemson speak nothing but praise about his maturity and dedication to the game. In 2012 he was charged with a misdemeanor possession of Marijuana, but who cares? He's certainly not DGB.

Despite his lack of ideal size, Watkins is an ideal fit as a #1 for this Ram's team. In fact, I've got a hunch that Fisher and Snead planned to pair him with Tavon and Bailey. They knew we had Washington's pick for another year and figured they could trade up to get him, adding the final piece to an explosive receiving core. They probably just never expected to be picking at #2 again. In Ram's terms, Sammy is a little bit of everything. He's a mix of Tavon's explosiveness, Stedman's hands, and Chris Givens's stretch the field ability. The thought of pairing him with Tavon and Stedman makes me salivate.

I'm going to settle this debate once and for all. Initially some compared him to Larry Fitzgerald, but they just saw the hair. Then came the Dez Bryant comparison, but that's not right either. The best comparison is Roddy White. Both have similar measurables and 40 times. White ran a similar route tree in college and continued to do so early in his career. Roddy didn't truly break out until his 3rd year, but he never had a legitimate threat opposite him until Julio came to town. I think that Tavon's presence is going to make Watkins' transition a bit easier. As an added bonus, the presence of both Tavon AND Sammy is going to make Stedman Bailey's life a LOT easier.

Sammy Watkins is the undisputed best receiver in this class. He possesses great athleticism and hands with a good head on his shoulders. Even though his route running needs work, he is still deserving of a top-5 pick. I'd love to see us trade back with Cleveland and get him at #4.

Would Sammy Watkins put this offense over the top?