I've been on the Greg Robinson bandwagon hard for the last few weeks now, but alas we will not be drafting him. It's no secret that Fisher and Snead prefer to draft linemen late and develop them so why not become familiar with their possible targets? Here are some guys that I've found in roundabout ways, many by accident. All are probably gonna fall in the Day 2 to early Day 3 range. Let's see who can shore up our line. 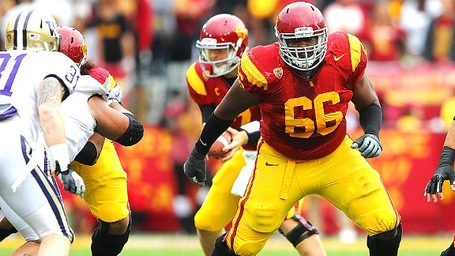 Profile: He's been a favorite of mine for some time and is now getting the recognition he deserves on ESPN. Don't believe me? Go look at the OC rankings. Martin is a very athletic, well built interior lineman. As a true freshman he earned 2nd Team All-American honors as a guard and never looked back. Since arriving in SoCal he has worked hard to control his weight and has dropped from around 330 to around 310. He wields a strong and sudden initial punch and is consistent in his hand placement. In the run game, he drives very well with an athletic base and steers defenders with his superior upper body strength. At times he lacks awareness and doesn't help on blocks he probably should when his initial assignment isn't there. Larger lineman can get on his chest, leading me to suspect he may have shorter arms but combine will clear things up there. What I want to see most out of him is a more consistent pad level. When he plays too high he gets stood up and beaten. Overall, he's a intriguing interior lineman with great athletic upside. I'd love to see what Paul Boudreau could do with him. 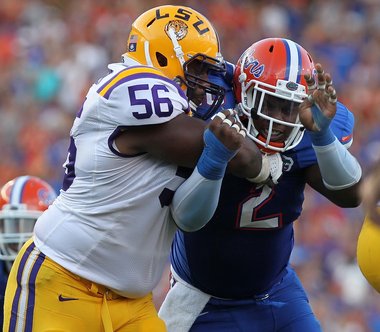 Profile: What's that? You say you like Gabe Jackson? Well Trai Turner is a better guard in the same mold. In many ways the two are similar. Both are very athletic for their size and drive with a vengeance. In the run game Turner paves lanes and manhandles defensive tackles, and when getting to the second level he locates quickly and effectively. I have no major qualms about his set or pad level. What most separates him from players like Gabe Jackson is the edge he plays with. Many here on TST like to claim that Gabe Jackson plays with a "mean streak" but it just doesn't show on tape. Sure, some plays it's there, but not too often. Turner plays past the whistle and really gets under his opponents skin. He's a redshirt sophomore, so the upside and room for improvement is definitely there. 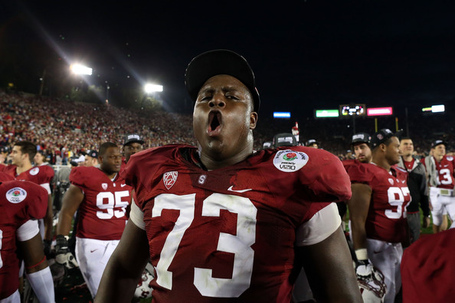 Profile: Fleming has the prototypical height, weight and foot quickness that you want in a right tackle prospect. While his feet are quick, they get sloppy at times and I don't see him ever being able to take over the left side. At this point, his run blocking outshines his pass protection. On passing downs, he uses his long arms well to fend off opponents but he needs to learn to use his feet more efficiently if he wants to be effective in the NFL. With an athletic QB like Kevin Hogan, Fleming found himself in situations where he needed to pick up a man in open space so that the play could be extended. He tends to over-extend in these situations, making himself a non-factor. He plays with a good motor and just a touch of "edge". Good mid-late round developmental guy.

Which do you prefer?