The story of Richard Sherman is a telling tale of how the NFL Draft process is warped. The most-hyped players are the ones that go in the top of the draft while equally talented players fall, and fall, and fall. These guys are labeled as "sleepers" and "gems" and treated as if they were never supposed to perform as well as they did. But if the process really is fair then why aren't these guys taken higher? I guess the point I'm trying to make is that CJ Mosley, despite being given a first round grade, is terribly underrated. 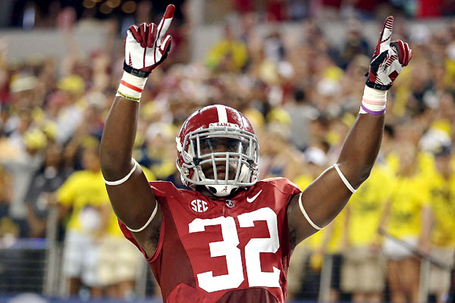 Obviously, the captain of the Crimson Tide defense isn't an under the radar prospect. Nary a mock draft have him picked outside of the first round, but none seem to come to a consensus on where he should be picked. He's been projected as high as #9 to the Buffalo Bills and as low as #22 to the Philadelphia Eagles. What makes him so elusive to mock drafters is his lack of flash. He isn't the supremely athletic edge rusher like Anthony Barr and Khalil Mack. Most of his work is done behind the scenes, using his instincts to make it possible for teammates to make the play. Mosley is what makes the Crimson Tide defense tick.

Mr. Mosley measures in at 6'2 and 232lbs. While he isn't a physical freak, he players with a football IQ like no other. I would go as far to say that there hasn't been a college linebacker with Mosley's level of instincts since Luke Kuechly in 2012. In the passing game, he recognizes down situations well and is able to disrupt passing lanes in coverage. In the running game, he uses his superior instincts to his advantage to keep clean of blockers and get into the running lane. Rarely does he overextend himself or make a false step. The discipline and effective reads he plays with are a product of his dedication to studying the film.

A lot of times CJ Mosley gets knocked for a lack of so called "athleticism". In fact, his athleticism is very underrated. Repeatedly, Mosley is able to redirect his momentum and outmaneuver blockers to make the play. When taking on blockers he keeps good pad level, allowing himself to keep his lower body engaged. He has good hands and length for the position and uses them to effectively shed blocks and make plays on the runner.

There aren't many weaknesses in Mosley's game. The best way to describe him is with the old adage, "Jack of all trades and master of none". In many senses, he is the linebacker equivalent of Teddy Bridgewater in the 2014 Draft Class. Nothing too flashy, just smarts and consistency.

The Film below is from the 2013 Iron Bowl. This Auburn game provides a good cross-section of Mosley's ability versus the run. It's only 11 minutes long, so if you have the time I implore you to watch most of it.

If Mosley is available at #13, is he worth a look?