The Rams are a young team. With that, trials and tribulations will strike the team each and every week. If you think that it's supposed to go smooth and we're supposed to win every game with authority, you might be asking for too much too soon. Considering the fact this is the youngest team in the NFL, there will be a lot of things that we will in retrospect look back on and stretch our heads in with question about what the hell did we just see. But what exactly are we looking at with this team, what kind of strategy does this team have going forward knowing that there will be growing pains? I think I've figured it out and I want you to think about it. 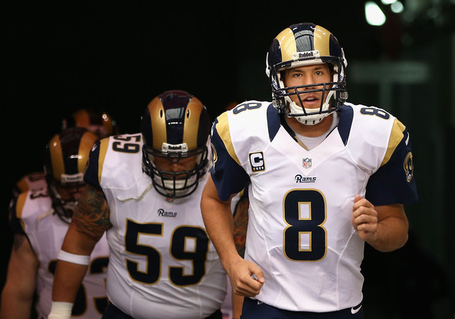 First, as I mentioned above, this team is young and many people will consider that a great thing, but when you think about it, it can be a bit of a curse as well. Not only will the coaching staff have to deal with that on an experience level, but how exactly they will coach these guys moving forward. Of course, play calling will be suspect at times beyond disbelief, but is this due to the inexperience of the team. I am the last person to say that I love conservative game play because it irks me beyond belief, but like years past it might be a good thing until the rookies get their feet wet. I expect the play calling to get more perplexed as the season goes on and Bradford should get more responsibility with that. Now, with that, you have to except a truth about this team over the next couple of weeks, there will be a lot of close games and you will develop headaches week in and week out because of the inexperience.

The Rams, I believe, will have to play not to lose for the first part of the season, pretty much like you saw yesterday until the 4th quarter. Sure, we will try to score every possession with no doubt, but rarely will you see them flailing the ball around like the Packers, it's just not logical. The first quarter will probably be used as a test to see how the Defense and Offense of the opposing teams will play it and from there on out, the Rams will have to adapt to that. The 2nd and 3rd quarter, this team will probably use a bit of rope-a-dope, feeling out the opponent on Offense and using the strong D to keep them within shooting distance to come back. In the fourth quarter, it seems as though Shotty tells Bradford to go do what he has done well for the last season and one game. In Bradford's first 2 seasons, Bradford only had one fourth quarter game winning drive and that was against the Browns in his injury riddled second year. In the last two seasons, Bradford has been what some have called clutch, having five game winning drives and/or fourth comeback (including yesterday's against the Cardinals). Some have even said it seems as though Sam doesn't try until he knows his back is up against the wall, but I disagree, I think it's all in the game plan. Maybe we wait until our opposition gets tired and then we go in for the knockout blow. We've seen this over the first season and one game of Fisher's regime. I personally love it, I didn't think Sam had what it took to be "clutch" and neither did most on this site, but he sure has proved us wrong. By the way, from yesterday in the 4th quarter, Bradford was 8 of 10 for 76 yards and a touchdown. Combined with the late drive in the 3rd quarter, he went 11 of 13 for 121 yards and a touchdown with a rating of 131.1.

Bottom line, it's all in the game plan fellas, at least that's what I've seen for the last two seasons. I'm not going to blow a gasket over a week one game that we won with a lot of mistakes. It's these kind of games that you have to know you can win. With this team, they have a bit of moxy in them that tells them that their never out of a game. It's thrilling, exhilarating, and it will have you on the floor in an almost heart attack state, while cheering your heart out, it's Rams football..