The St. Louis Rams begin their season on Sunday, at home to the Arizona Cardinals. The Rams have kept their new-look offense under wraps for much of the preseason. How will they fare in 2013? How will Sam Bradford - and his receivers - perform statistically this coming season?

Share All sharing options for: Sam Bradford, the wide receivers ... and realistic expectations

Jeff Fisher has kept the St. Louis Rams' new-look offense under wraps the entire preseason. We've seen brief glimpses of the explosiveness - and potential - of Tavon Austin, Jared Cook, and Chris Givens in practices and preseason games. The possibilities have only been hinted at for the new Rams offensive weapons on hand. The wraps are about to come off in the Rams home opener against the Arizona Cardinals.

The Rams offense underwent a dramatic transformation during the off season. Steven Jackson, Danny Amendola, and Brandon Gibson all departed via free agency. TE Jared Cook was signed as a free agent. The offensive line was bolstered with the signing of OT Jake Long. The Rams traded up in the 1st round of the draft to select WR Tavon Austin, and added his teammate - WR Stedman Bailey - in the 3rd round. RB Zac Stacy was selected in the 5th round, and RB Benny Cunningham looks like a great UDFA find. In addition, the Rams now have some continuity - the same playbook and offensive coordinator - for consecutive seasons. The dramatic transformation has created excitement, as well as expectations.

Sam Bradford throwing 35 TD passes, or throwing for 4500 yards are in the dream-scapes of more than a few Rams fans. How about a 1000+ yard wide receiver? Is it possible Tavon Austin will be breaking Rams rookie records for receptions and yards? These are some of the expectations being bandied around - a result of all the positive change to the offense in the off season. Are these expectations realistic? For all of the infusion of talent in the off season, the Rams did lose some pretty significant contributors in Jackson, Amendola, and Gibson. They've been replaced by much younger, explosive players - although it will take time for them to learn the offensive system, the NFL game, and their positions.

The Rams' 5-man receiving corps has a total of 4 years NFL experience, and 1371 career receiving yards. These factors alone should temper expectations to a degree. The running game? The running backs have a total of 2 years NFL experience, 529 career rushing yards, and ZERO touchdowns at the NFL level. It will take time for them to develop and fully complement the offense as a whole. Sam Bradford? He's expected to continue his development, and improve on his 2012 performance. A second consecutive year in Brian Schottenheimer's system, an improved offensive line, and the addition of explosive play-makers, all bode well for Sam Bradford - and the Rams offense. What are realistic expectations for Sam Bradford - and the receiving corps - for the 2013 season? 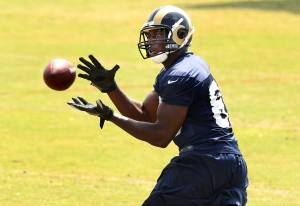 The accompanying charts present 2013 projections for Sam Bradford and the receivers: