***Editor's note: I love these RAMblins pieces. TST's "ramdude" is one of the funniest guys you'll ever "internet meet". Because of his unique voice, I steer away from editing anything of his, so you get Dude's Southern flavor in it's many rich forms. Enjoy! - DouglasM***

It's finally upon us - the 2013 NFL Football season! And we're starting closer to full strength (albeit w/o one Jo-Lonn Dunbar) than I can remember in a LONG TIME. I don't think anybody's mentioned it, but Sam looks to be in better shape than he's ever looked to me. With SJ39 gone, he's ready to take the next big step and lead this team.

Not making a guaranteed prediction here but:

So how do we lose? It won't be easy, but we're the Rams - so all bad things are possible even if they're not likely. Maybe this is the year we finally lose that stink. Here's how we could come away displeased and unfulfilled:

So, in conclusion, I think we have improved (at least slightly) in almost all facets of our game from last year. And I think the Cards will be breaking in a lot of new stuff. We own our destiny, and we should play that way. I look forward to a good game from two teams lookin for a lil respect. 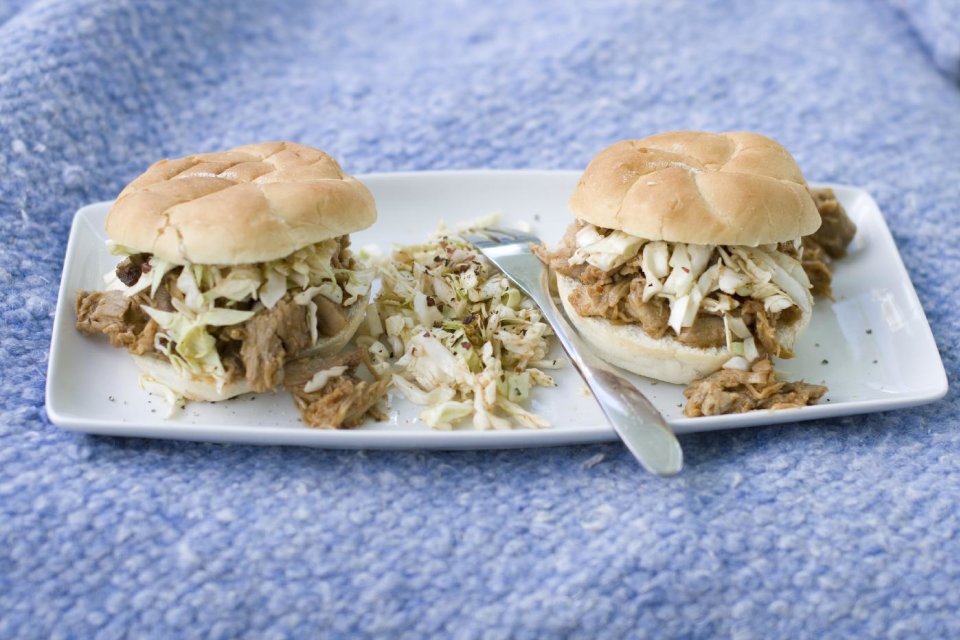 Last September, I wrote about my first attempt at slow-cooking baby back ribs - you know, like the pros do. I've always wanted to try Eastern NC-style pulled pork (BBQ) but was scared I'd screw it up. An article in my local newspaper gave me and the wife the gumption to try it.

Now when somebody tells me something is "easy," I usually figger, "Sure, after you done it a couple hundurd times and if yer - smart." Well, I'm tellin you, this is as easy as fallin off a ladder drunk, blindfolded and juggling 3 cats. And it makes a CRAPLOAD of food! Mind you that a pint/pound (same container size) of BBQ from Smithfield's in NC is $9.99. For about a $28 investment (mostly the meat and with plenty of fixins leftovers), we got 6-7 pints. I'm pimpin BBQ now.

Here's another thing. The sauce goes on after the meat is cooked, so once it's pulled or chopped you can throw any dang thang on it you like. At this point, I'll let you take a gander at my inspiration and follow up with some moments o'clarity.

These are the key cooking points:

Do not trim any excess fat off the pork (Boston Butt); this fat will naturally baste the meat and keep it moist during the long cooking time. Brush the pork with a thin coating of olive oil, then season with salt and pepper. Set aside on a clean tray until ready to cook. (Easy enough - just coat w/oil, salt and pepper)

Before placing the meat on the grill, add soaked wood chips (soaked in water for 30 minutes). For a gas grill, use a smoking box according to product directions.

Place the pork in the center of the cooking grate fat-side up. Cook slowly for 5 to 6 hours at 300 F, or until a thermometer inserted at the middle of the pork registers 190 F to 200 F. The meat should be very tender and falling apart. If there is a bone in the meat, it should come out smoothly and clean with no meat clinging to it. There is no need to turn the meat during the entire cooking time.

- Now here is where Elizabeth and I differ a little. I cooked for about 6.5 hours at 300 F and only got the meat temperature up to 145. (Maybe my meat or grill thermometer was off, but I doubt it.) I gave it another 45 minutes at about 400 F and got the meat temp up to 180 F which was good per my meat thermometer. Came out fine.

Brian Urlacher admitted something this week that I find hard to believe - sometimes, and probably very rarely, defenses will fake injuries to slow down an effective hurry-up offense. I can't imagine such a thing in Goodell's game! It's down right dishonest! Well, now that he's retired, shirley it won't happen anymore (like 2 years ago with us and the Giants).

Don't You Worry about Chris and Jake Long

Here's an article by Joe Lyons of the St Lou PD. Starts off with Chris %controversy Long saying he feels GRRRRRREEAAATTT to start the season. Sounds a lot like what Jake Long said earlier this week. My friends, we finally have a coaching staff that respects the body's need to repair itself - very encouraging.

Also, Eugene Sims talks in the article about how glad he is to have been working with Fish and Mike Waufle. And Matt Giordano finally practiced Wednesday.

In this link, Ben Frederickson discusses the Alec Ogletree situation. Tree's had to grow up fast since he's been in St Louis. After a rough start, the Denver game gave us hints at what he's capable of. Hope we see a lot more!

A Little Something to put a Smile on your Brain

Little Feat is a band that can make any day go a little better. If I'm feeling troubled (like during the football seasons of old), Fat Man in the Bathtub will fix me right up. You can't get much more cow bell (or wood block) than this!


I actually like the version of the song on their live Waiting for Columbus album better, but there wasn't any video with it on YouTube. It's a GREAT collection of songs. Below is the whole 2 LP set if yer nasty. It'll put a Rocket in ya Pocket!

Enjoy your Saturday friends, and I hope we're one game closer to 16-0 after tomorrow! No close shaves please...