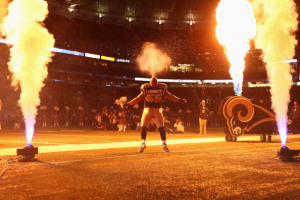 The time is here my friends. The season has begun and we are a little more than 2 days away from some Ram football. This will be a relatively long post so no time to be wasted lets dive right in, beginning with an overview all the positions.

This is the easiest to evaluate of the team. Sam is the man and will be the man the entire season. If anything were to happen to the man we would be in some deep doo-doo. Sam Bradford is headed into what I believe will be his best season to date. A lot of talk has been made of make or break, but that's media/impatient fan B.S. Sam has not had a bad first 3 seasons, he just hasn't been throwing 600 times every season and coming away with 4500 yds. But that has more to do with his team, coaching staff, and game plan. I'm sorry but not many QB's are going to be throwing for 4500 yds when attempting less than 600 throws a season. Also how the hell can all these people talk about "oh I trust Fisher and Snead, but then turn around and not trust Sam? If those two trust him, he was the main reason Fisher took the job, shouldn't you so called loyal "Snisher" fans trust him as well? So sit back relax and stay patient, because while it will be his best season it will be a rough one as well with all this "YOUNG" talent, plenty of miscues, drops, and a few turnovers.

I am very happy for Daryl Richardson. I love a good underdog story and he just put together the beginning of a good one. From second to last pick in the draft to starter over the 50th pick and replacement for a legend. Now all he has to do is rush for 2000 yds. If he doesn't then he is a failure and should be benched. Naw kidding, but that's how some people actually feel in these situations. Never understood that mentality. D. Rich will be fine. I am sure of that. The young man has earned this opportunity and will shine.

As for the depth, I believe the young backs are going to step up big time. Its a well known fact the easiest position to transition from college to the NFL is RB. We have some really talented backs. Isaiah Pead is a knucklehead that can't seem to figure out he is good enough to be a 1700 yds from scrimmage machine, but if he ever learns that, and stops fumbling, watch out. Stacy has the skill set to be another Doug Martin. Not a blazer, but has deceptive speed and agility, and an unbelievably strong runner. He can get you a lot of touchdowns in the red zone. Then there is Benny Cunningham. The guy has some serious talent. He is the other three backs rolled into one. At 5'10" 217 lbs, he has a nice blend of size, speed, and power. And he happens to understand the running back position, showcasing very good vision, decisiveness, and blocking.

The time is here, Jared Cook, aka "Cookie", can finally be "That Dude". He has come out and openly said he has been waiting to really show what he can do. Well it seems he does not want to look like all talk with the extra work he put in with Sam. I am eager myself to see how this season plays out for him. I am most excited to see Lance Kendricks though. I have said this quite a few times this off-season, but no one was more impressive than Lance last year. His improvement can't be talked about enough. People seem to think the addition of Cookie, means less Kendricks. I beg to differ. I believe we will see them both on the field early and often.

A lot is expected of Tavon Austin, but less temper those expectations a wee bit. He will be semi productive this year, not a stat stud. You should expect not too much more than 1000 "total" yds. For those of you that don't know what "total" means, and immediately came up with a comment to post below about how I said he will have 1000 receiving yds, think again. Total, as in receiving, rushing, and returns, combined. He will also only get about 6 total tds. Austin Pettis is going to be solid, especially on third down and in the red zone. Pettis might end up with much better stats than a lot of people are expecting. Lets look at the facts, he is starting, don't mean much to those of you that don't want him to be, so you say "with all the subs it won't matter", but if it were Quick starting, we wouldn't hear all that chatter (hey, that rhymed). Pettis is playing on a team where he is consider the lesser threat of all 11 skill players (5 WRs, 4 RBs, 2 TEs). Of 11 he is number 11 on opposing coaches watch list. That is excellent news for him. So let's recap, he is starting, and will receive the least amount of attention. With those 10 other guys, and if the passing game really will be the open guy type of passing game I am expecting (think the Saints), expect Pettis to see probably 150% more targets than you originally thought. So I you were thinking 40 targets (thats targets not catches), it will probably be 60.

Brian Quick is going to get his shot in red zone situations. I also believe they will use him a lot in third and long (another good time to use the jump ball to your advantage). But don't expect some drastic breakout. And don't get excited if he has one game where he catches 8 balls for 115, and 2 tds (very likely), because it will probably be a case of the circumstances and not him evolving. If you are not the number one receiver in this offense it will be very hard for some type of break out. But steady progress is more than achievable. Stedman Bailey has constantly been lost in the shuffle. His hype trained died off when draft week ended for the most part. But I am not sure that is the smartest thing. He will play a decent amount of snaps. If I had to guess I would say probably about 275 for the yr. That's 17 snaps a game. The average offense plays about 63 plays a game. So around 20% give or take. He is fifth in the receiving options, but again, the open guy rule. He will give us the most from the least. I am confident about that. Don't expect too many bad showings from him. And don't be surprised if by seasons end he is no longer the fifth option.

The Bread winner in this receiving game is Chris Givens. I believe there is no one on this team that Sam has more confidence in than Givens. The speed demon has worked hard on completing his game, and while he still has some ways to go, his progress is more than visible, its evident. Givens is going to flirt with 1000 yds. He will probably finish in the top two in receiving td's as well. Givens is going to be a dangerous weapon, because only one other reciever knows the playbook as well as him, and that's Pettis. But Pettis isn't nearly as talented. And as for the guys who are as talented they don't know the offense like him, nor do they have Sam's trust like him. I am expecting at least 2 deep shots a game. Expect more 50 yard receptions this year. His intermediate routes will set up the opportunity for him to eclipse his 5 receptions of 50 yds or more. Also remember that he basically did that in 12 games. He played sparingly the first three and was suspended for another. Let's see how he fares with a full 16 games, a better and more complete route tree, and his quarterbacks trust. OOOHHHH BOOOOYYYY!!!!

Simply put I expect a stout O-Line. I believe Jake Long will go back to being the best to do it. For some reason the I also believe Scott Wells will play a full sixteen games. I actually only question Roger Saffold's ability to stay healthy. I am 50/50 on his 16 game availability. But I do have the utmost confidence in Joe Barksdale. I believe he can step in fill the void easily. I think a lot of people forget, coming out of LSU in 2011 he was a projected mid 2nd rounder. He was ultimately drafted in the third, but clearly the dude has some serious talent. And he is the understudy to Jake Long, and has been getting coached up by a top 5 O-Line coach for a year now. Lets just put it this way, if Saffold walks this off-season don't be surprised if we do not have any tackle high on our draft board next May. Yea, you heard it first, if Saffold Walks, Barksdale starts. Barksdale actually reminds me a lot of Saffold, just more healthy and less experienced. As for the rest of of our depth, Shelly Smith is more than capable of stepping in and holding his own, clearly since he was almost named a starter. Tim Barnes is average and will lose some to more power defenders, but never because of a technicality. And Barrett is the exact same way only more detail oriented .

The offense will be better and more efficient, but overall there will be plenty of hiccups. Of the 11 key skill position players, only one has more than two yrs of experience (Cookie), and that one didn't even play that much as a rookie. This offense is lacking experience hardcore. That usually means as the season progresses the efficiency will as well. The problem is the toughest part of our schedule is the beginning. We will have some bumpy and at times bone headed days. But for the most part the talent is undeniable, and will most likely prevail more times than not. But even with that success as we all know, one mistake can lose a whole game. We have an uphill battle, but I promise the light is near my friends, and when we grab it we will hold for a long time. This offense is going to be special, just have to be a little more patient. Remember not many rookies dominate, and not many 2nd yr players avoid the dreaded sophomore slump. Our keys to success will be the O-Lines health, and Sam Bradford's comfort and knowledge of the system. If we rely on those two things rather than our young and inexperienced skill players, than their jobs will ultimately be much easier, resulting in better individual success, which equals team success.