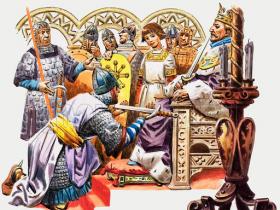 "You have the weapons, are protected on all sides and process the leadership. You must now go to battle and champion your army. Anything less and you may lose you head!'

While this may sound like a statement from a King to his greatest Knight just before a huge battle, it pretty much applies to Sir Sam Bradford, the Lord of Sooners. Yes, this is the year of fame-doom for our beloved #8. He has had many valid reasons or excuses to some, for not taking the next step to being a known quality in his first three years on the Rams. Will this be the year his name is mentioned for the Pro-bowl or even M.V.P talk? Or is this the year he walks the plank and is looking over his shoulder next year at a another big time name to push him in his contract year? All Sam needs to do is look in the mirror and say "It's all on you bud!"

The front office and coaching staff has put together the best young group of warriors this land has seen in many, many moons. Danny Amendola was a great warrior in his own right for the Rams (when he wasn't injured), but the drop-off was a cliff after him. Although, Chris Givens did have very good moments last year. This year Givens is the true #1 receiver (and earned it!) this site has lusted for a great while. And I do want to stay all the excitement for all the rooks. Don't get me wrong, the draft this year was the best on both sides of the ball since 1999. BUT, they are all unknowns until that first snap on Sunday September 8th, 2013.

Of course, everyone here wants the first possibility. All things being on a maximum level for the players on the roster now. Sam leads them to a 10-6 record with a couple of close losses to more talented teams and the defense gives him a chance in a couple others. He throws for 4200 yds, 30 tds and 12 ints and is rarely sacked. Runs the no huddle against better defenses on a good pace and has about 4 or 5 300 yd games.

The next possibility verges on stagnant. He puts up pedestrian numbers on a pedestrian team. A 7-9 record, while not bad does influence the thought process for the front office and puts the coaches at risk also for 2014. He throws for 3050 yds, 20 tds and 19 ints. He is pressured regularly and holds on to the ball too long which cost a couple games. Looks lost for periods of time and only manages 1 300 yd game (against the Jags he he).

The last and literally last place possibility. Sam throws a early pick 6 in week one and never recovers. His receivers are losing respect and confidence as the season progresses and the defense alone wins three games in a 4-12 season. I won't embarrass Sam with numbers on the year in this situation, but only three other Quarterbacks had worst seasons.

My personal thought on this is the only thing holding Sam from being elite is Sam. If I were his coach or mentor, I would send him to a Worldly man* for advice or a Buddhist monk to help him find that missing element inside that is holding him back.

*Someone who has seen or done everything humanly possible in a lifetime.

What does Sam Bradford accomplish this season?