There’s nothing to see tonight…except for regular season football.

Even the Ravens’ Writers Aren’t Buying the Ravens: Baltimore Sun

The Baltimore Ravens are the defending Super Bowl Champs. That doesn’t mean that wins will come easy in the upcoming year. The Orioles weren’t willing to budge, and therefore the Ravens are hopping the plane to Denver. There may not be a more difficult opponent in the AFC…and the Baltimore Sun writers recognize that.

One Ray Channels Another: USA Today

I don’t know how often one - very young - offensive player finds inspiration in a player on the opposite side of the ball, but there’s been a spiritual connection amongst the Ray’s in Baltimore. While one Ray [Lewis] retires - as one of the greatest to ever play the position - the other looks to utilize inspiration from his elder to keep the team afloat.

Rams’ second year running back - Daryl Richardson - put together a very respectable rookie year. He surprised the masses by earning the backup spot behind Steven Jackson, and performed admirably when called upon. But he’s yet to do enough to be ranked amongst the league’s best. How does Chris Wesseling think he stacks up?
<blockquote class="twitter-tweet"><p>What&#39;s goin 12th man just checkn in ...I&#39;m making serious progress ...keep an eye on week 7...don&#39;t hang them 11&#39;s up.....we workn</p>&mdash; Percy Harvin (@Percy_Harvin) <a href="https://twitter.com/Percy_Harvin/statuses/375345200882651136">September 4, 2013</a></blockquote>
<script async src="//platform.twitter.com/widgets.js" charset="utf-8"></script>
…it had been reported that Seahawks wide receiver - Percy Harvin - would miss the majority of the 2013 season. He’s providing the fan base with a twitter teaser here. CBS Sports has more on this story…

In 11 NFL seasons, the Cardinals’ new signal caller has only donned a new uniform twice. This Sunday will mark the third time for veteran QB Carson Palmer. Arians calls the new era - for both he and Palmer - a "last hurrah." Palmer states that he wants to be around for several more years, but does he have it in him? It’s not an easy division to go from bottom-to-top with relative ease. First things first. How will the new era begin for Palmer and Arians on the road this Sunday in the Edward Jones Dome?

The Door Hasn’t Closed On A Jo-Lonn Dunbar Return: ESPN

A disappointing four-game suspension, coupled with the potential cap hit, has earned Rams’ outside linebacker Jo-Lonn Dunbar a cozy spot in the free agency pool. Jeff Fisher’s not ruling his return out, though. "Anything’s possible," the Rams head coach says. It sounds as though he’s got the utmost confidence in veteran LB Will Witherspoon, but could the Rams bring Dunbar - who had a very good 2012 season - back for his Week 5 return?

The 49ers defeated the Packers in the NFC playoffs last season, and 49ers’ QB Colin Kaepernick did plenty of damage with his legs. The Packers have devised a new plan for Week 1…pummel him. Clay Mathews makes their stance pretty clear. Prepare for a bruising, Kaep...

It looks as long as that quarterback is carrying out that fake, he loses his right as a pocket passer and rules that govern that. We'll see the hits that are legal and what's not legal, but we think our game plan fits within the scheme of the officials and what we want to do - Packers’ LB Clay Matthews

Call it an "unveiling" if you will, but the time has come for the Rams to put the ball in the hands of Tavon Austin, and let him do what he does best…make plays. That being said, there are plays specifically designed for him that the world has yet to see. Bruce Arians knows it’s coming. Could it be wildcat? We’ll find out on Sunday. It’s about time to turn "Vanilla" to Chunk Monkey!

Six members of the PFT staff take a stab at the six AFC and NFC teams that make the playoffs in 2013. There’s been some discussion of the Rams stealing a wild card spot…but only one member of the PFT team seems to think so. It’s a short lived postseason, as well.

Eight members of the PFF staff prognosticate just about every postseason game and award. As you could probably image, you’re not going to see much about the Rams in these predictions. The article isn’t void of Rams though…for both players and coaches. Also, no one picks the Rams to earn a wild cart spot.

Who’s ready for a 49ers v. Broncos Super Bowl?!? No? Me neither. The NFP staff make their preseason predictions at each of the NFL’s division winners and Super Bowl teams. Maybe the better question is "Who’s ready to root for the Falcons?!?" 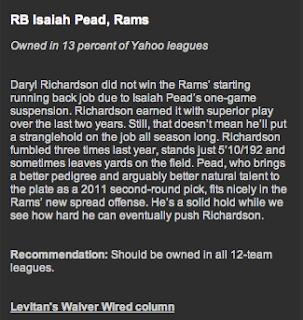 Were you hoping to start your morning looking at a bunch of color-coded charts that make you feel good about the Rams? Well then, you’re in the right place! Let’s face it, though, the 2013 Cardinals should be far more dangerous, and certainly not underestimated.

Interested to know the pulse of the Rams’ Week 1 opponent. The outlook for their upcoming season is certainly brighter than the conclusion of their last. They’ve got a new coaching staff, and 26 new players on their roster. You’d be wise to brush up on the 2013 version.

I’ll admit, I like the idea of this article, as it contains win/loss predictions, locks, upsets, studs-n-duds, upset specials, and Monday morning headlines. The one thing it negates is the middle-of-the-pack teams. Therefore this one is diet on the Rams. A few early season wins could easily make them an entry into Football Nation’s Super Chart.

Are you as concerned about the Rams’ preseason power rankings as I am? No? Well, if you think power rankings are as important as I do [right behind oxygen] then you won’t be too pleased with how many of the major networks are ranking your favorite team.

A Very Early Look At The 2014 NFL Draft: WalterFootball

I’m about 90% sure of the Rams’ 2014 draft picks. I’m also about 100% certain that I’m wrong. Before snap one of the regular season, take a look at what the guy from Breaking Bad thinks about next year’s draft.

25 of the Smallest Storylines Entering the Season: Sports Pickle

It’s a very unfunny article I’ll allow link solely because I’d like for someone to explain to me how #9 could potentially be funny. Along with 1-8 and 10-25. I’m going to just stop linking anything from this site. How’s that sound? You can vote below. Actually, you can’t… I just won’t link them anymore.

September 5th Was a Very Notable Day In Sports History…

There’s only one way to tell how your fantasy roster will fair each week, and that’s to view these rankings. You should also not that these projections are completely arbitrary, and will piss you off at some point. Regardless, they’re here…and they’re respectable.

Fearing that you found no credence in the last fantasy player rankings, I scoured the internet for another. Here you have it. I’ll advise you to use your best judgement. It’s not science…and it’s not always easy.

It’d be lazy of me to copy and paste the text from the two previous links, so let me just tell you about myself. I’m a taurus. I enjoy long wal…cottage cheese, and I adore IPA’s. If you don’t care, there’s a link above that has fantasy football rankings for Week 1.

You don’t have to like - or play - fantasy football to read this extensive read by Michael Fabiano. If you are indeed in a fantasy league [or five], he’s got some great advice on who should be on your starting squad. If not, view it as a prognostication of Week 1 production. If it pushes you over the edge, I’ll mention that Fabiano doesn’t care for the Rams very much in Week 1…none of ‘em.

Purely based on the amount of time and research it must’ve taken Nathan Zegura to write this, I feel obligated to leave it here. Not only does it provide stats - actual and fantasy - for the Cardinals v. Rams game, but he covers every matchup in Week 1. Fabiano didn’t care for Daryl Richardson or Jared Cook this week, but Zegura has stats that’ll make you think twice.

Here’s a quick look at USA Today’s fantasy football rankings for Week 1. Oddly enough, they don’t match the rankings from any other site… you’ll probably have to go with your gut.